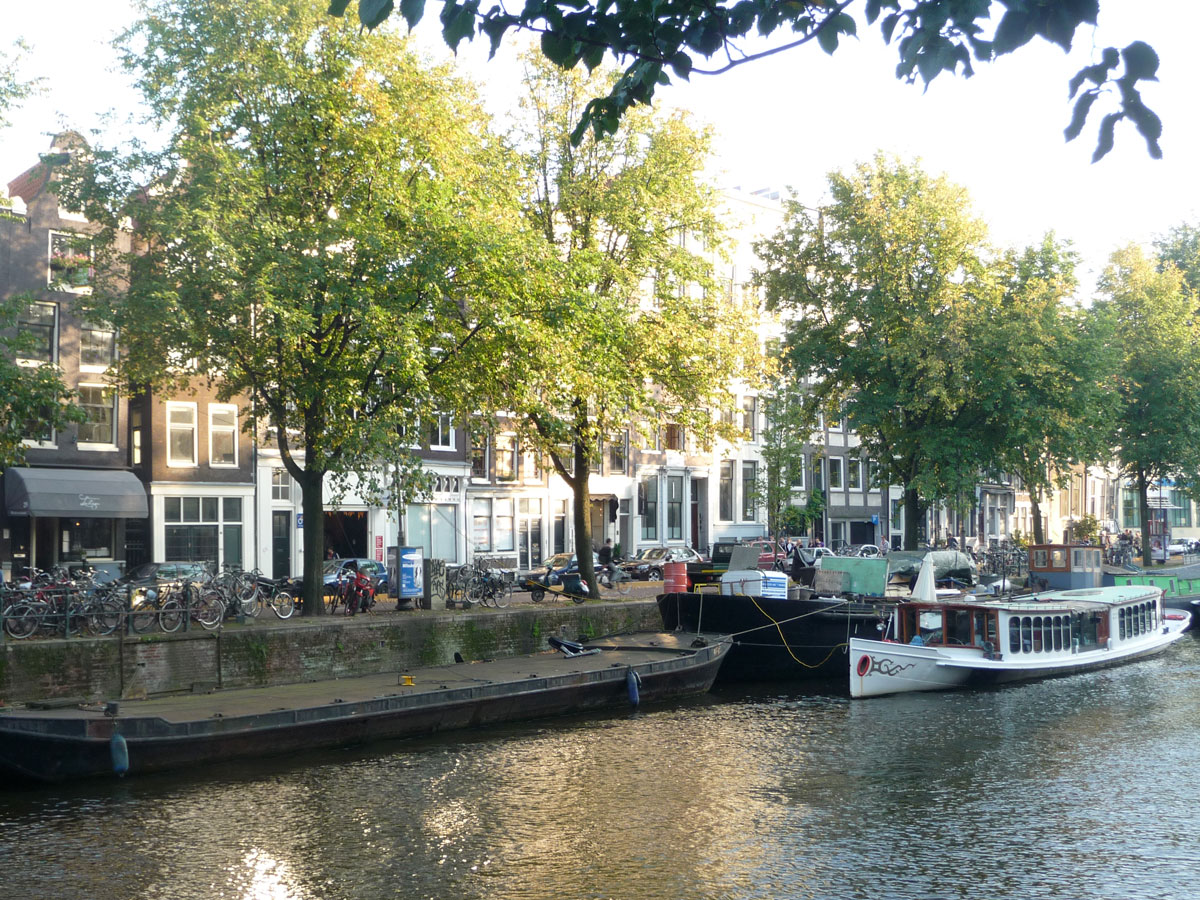 I have never seen so many white guys with dreads as I did in Amsterdam. It felt like one extended Spin Doctors concert! And, yeah, dudes, you don’t have to prove to us you’re Rastas so you can smoke weed without getting harassed by the fuzz–it’s legal here. While dreads are a fashion statement better left to Jimmy Cliff and Bob Forrest, the majority of roving gangs of dudes wore their hair short and, well, really short. What I took to be packs of British football hooligans or German Germans, we were later told were “Polish.” That’s Polish with a capital ‘P’ from the country of Poland, not some Cockney rhyming slang term for thugs. Of course we were told this by a Johnny Rotten-looking ex-Brit who had lived in Amsterdam for 10 years, and had clearly lived it up in that time. He saw the confusion on our faces immediately (the confusion not aimed at his incoherent “old lady” who was sliding off her barstool into a blathering puddle on the ground) as it didn’t seem to us that Poland was a big exporter of tourists, let alone endless gangs of shaved-head dudes in track jackets. He quickly cleared his throat, straightened his back and in his best broadcaster voice (complete with sarcastic air quotes) said, “Soooory, not Polish exactly–I believe the PC term is (here came the brutal crooked fingers) “Eastern Block.” He then went on to tell us that the Amsterdam had no government and that the Hells Angels controlled all the pot cafes and hooker windows all up and down the red light district. Hells Angels? Like the dudes with the leather chaps, swastika tattoos and handlebar mustaches? The same. We’re still not sure what that was all about. He turned out to be the most interesting dude we talked to all week.

Then came the drunk, young British lads who we ran into at De Stoof. One particularly USA-file took a liking to me and told me several times how he had bit torrented all the latest episodes of Shit My Dad Says and The Big Bang Theory. His friends had no idea what he was talking about, and I told him that CBS was an old person’s channel. He seemed hurt. The drunker we got, the more outrageous the nicknames became. His one friend, for obvious reasons, became Rerun, and his aggressive friend became Dolph Lundgren (though Ms. Hispter considered him more of a muscular Thom York look-a-like) and lastly came Seth Green (because he looked just like Seth Green). Of course she was right. Some Canadian (of Indian descent) got into our across-the-pond lovefest and thoroughly confused these chaps from Yorkshire. They looked at him and his brown skin cockeyed and somehow deduced that all Canadians apparently look East Asian. I, of course, knew him to be Canadian the moment he said, “I gotta get oot of here.” We had a great time with our English buddies, but eventually got drunkenly separated from them and engulphed by a group of Midwestern cosmetologists who were in town for some sort of hair show. Ms. Hipster left the night (which ended at about 4:30am) with a new understanding of British slang terms for vaginas and penises and I got a group hug from a gang of fellas whose total ages combined barely surpassed my own. 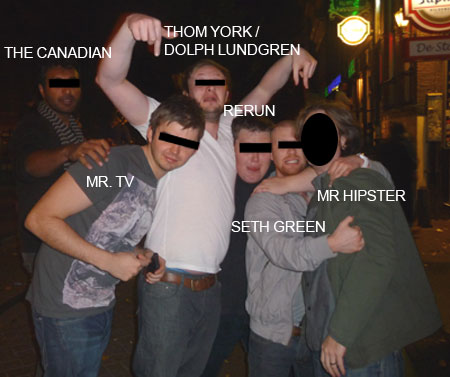 Amsterdam is not only drinking and whoring, though. We stayed in a lovely boutique hotel right off one of Amsterdam’s many canals. Crafted from a five-story building built somewhere in the 1580’s, our hosts at the The Mauro Mansion, Barry and Marcel, were wonderful hosts and seemed to find us endlessly amusing. Well, Barry did. I think Marcel, whose English wasn’t as strong, just found us confusing. Three days into our trip and we were still asking directions to stuff. We seemed confounded by the difference between coffee and espresso and we clearly kept odd hours. Despite this they (or rather one of the most adorable blonde girls I’ve ever seen in my life, whom they must have hired so they could actually enjoy a night out) recommended an awesome local joint called Eetcafe Van Beeren, into which we strutted and were spoken to in Dutch as if we were locals! Now, you’ve never seen the missus and me but neither of us would or could possibly pass for what would typically be a Netherlander. Granted, Anne Frank did at some juncture live in the city, so maybe I could have passed back in 1938, but now I just look like a Jew from LA who needs a haircut. Anyway, the waitress soon realized we had no clue what she was saying and seamlessly slipped into English, the default language spoken by just about everyone there if Dutch isn’t in the picture. It must kill the French that they are forced to speak that low language when ordering their toasties. Hadn’t the place been filled with European lookin’ folks speaking gobbledygook, this could have been a terrific neighborhood bistro in the East Village. Next they suggested Cafe Bern (what was with all the bear places?), where we had gnarly fondue and yet another joint called De Haven van Texel that, sadly, was one of the only joints in the entire city that had microbrew beer. The rest of the places we visited had only Amstel and Heineken and the occasional Wieckse or Leffe. Kinda disappointing on the beer front, but it certainly didn’t stop me from imbibing on a nightly basis–several tens of times. 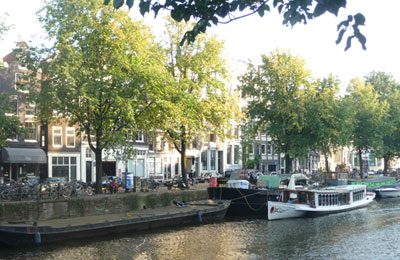 We did do a few touristy things while we were there, including going to the Anne Frank House (which I recommend highly) and the Van Gogh Museum (which was disappointing), but the majority of the time was spent drinking, people watching and wandering around semi-lost. It seems there is still a bit of the old 60s vibe hanging around, as kids pour in and out of hostels and patchouli hasn’t yet been outlawed. In fact the entire city, at least around the red light district near where we stayed, smelled of a combination of stale beer, pee, weed and canal water. It’s honestly not as bad as it sounds, but there is this weird public urinal thing that basically exposes wieners to the passers-by and empties the output right into the street. Despite this the city sanitation workers do a nice job of washing down the streets, sweeping up the tons of broken bottles and other trash to prep for another night of marauding European dudes. Quite efficient all things considered. Oh, did I mention the fat, Mexican hookers down the street from our hotel? Apparently working on the outskirts of the district is truly the scut shift, and every day and night we walked by these ladies’ windows. These poor, poor ladies. What they were doing in Amsterdam is anybody’s guess, but they certainly didn’t seem to be making a living. The whole prostitute thing in general mystified us, but that’s a whatever for another day.

All in all, Amsterdam is a party town full of party people. I’d say three or four nights is about all any red-blooded American boy might need in the second city of sin. Okay, maybe five or six if he’s single and willing to shell out some dough for what would otherwise be illegal in the USofA.