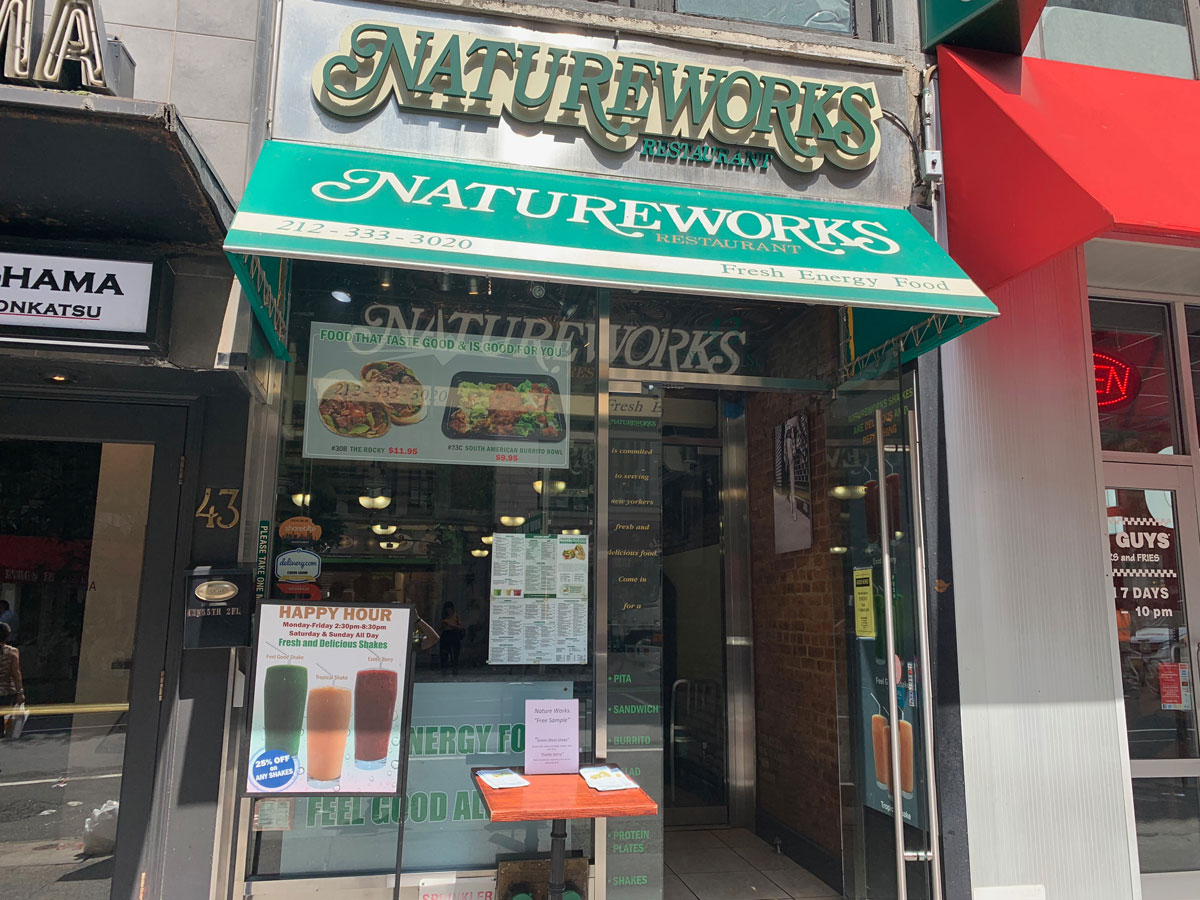 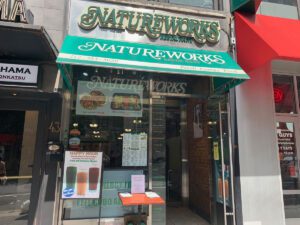 I grew up in California literally eating wheat germ and carob. We used to go to those grocery stores that smelled kind of like an old barn, had oats and shit in barrels and bins filled with trail mix with yogurt covered raisins. That shit was considered health food. I remember turkey burgers on whole wheat buns and sprouts on absolutely everything. It was a stupid time. It was a bland time. It was a time where sugar was vilified and people were super into the food pyramid. Even though that turned out to be total nonsense.

So, I suppose places like Natureworks are the new 2000s version of the health food joint. Though they’ve wrung the hippie out of it and gone with more green juice lady in yoga pants vibes. Even though they claim on their website to have been around since 1978. So they were essentially around in the sprouts era, but have updated it to include a mediterranean twist. Because it gives a little bit of a foreign flare without getting too funky. Plus, you add a little hummus to a plate of anything and it automatically becomes Mediterranean, I suppose.

I only ended up here because there was a deal through one of those meal service things. It was specific to the “Ultimate Plate.” Which sounds pretty awesome if you’re just going by the name. What it amounts to is some chunks of lemon chicken breast, steamed veggies, hummus and brown rice in a recyclable prison tray. Was the food relatively plentiful? Sure, it satisfied me from a volume standpoint. Was the chicken cooked beyond the point it might poison me with salmonella? For sure. But — and this is the main problem with “health” food — whereas similar-ish approaches like Dig Inn slather their grub in some sort of tasty oil, salt and herbs, Natureworks goes the dry, unadorned route. Because I guess sauce, oil and any kind of flavoring generally abandons the “healthy” contract. So, the chicken was inoffensive, but generally flavorless. The veggies were totally fine, but steamed veggies with nothing on them remind you of the stuff your mom gave you in the 70s on a cornflower or avocado-colored plate. But, honestly, the most unsettling (although not terrible) part was the hummus. I’ve eaten a lot of hummus in my life. Including homemade stuff from Hipster Grandmother-In-Law, who made authentic Lebanese grub. And without much of an exception, it’s been smooth and garlicky. This stuff, not so much. It was a bit grainy and a little lumpy. Most likely because in order to make it “healthy” they didn’t put much olive oil in it. That oil being the thing that makes it smooth and silky and, well, tasty. Imagine their hummus like the difference between Skippy peanut butter and that uneven, pasty peanut butter your mom used to make in the food processor. It just ain’t the same.

Look, the food was totally fine. But at $15 for that plate when paying full price, it hardly seems worth the money. Sure, I felt a little less guilty eating plain food. But if I wanted plain, I’d cook for myself. There’s not a science to not putting any flavor in your food. And, honestly, just because the word “hummus” sounds foreign and healthy doesn’t mean you call mashed chickpeas hummus and it’s actually hummus. Last I checked, garlic doesn’t have any calories. Neither do herbs or spices. So feel free to throw some around and maybe don’t go with the default feeling that healthy food can’t also be tasty.