I hadn’t been to a circus in many years prior to attending the Big Apple Circus with Hipster Jr. But I seem to recall it being a grand event in a giant tent that included elephants and zebras and tigers and stilt walkers and 50 clowns piling out of a VW Bug. In other words, spectacle. The Big Apple Circus was more like a Black Cat firecracker to your more typical M80 bigtop event. Some might even call it quaint.

The first thing that struck me is just how small the “big” top was. I’ve seen elementary school auditoriums three times the size. While some circuses have three rings, this circus has one—one very small one. It was about the size of one of those round beds from the 60s that my aunt in Vegas sported until they stopped selling sheets that fit it. At one point the guy who balances on horseback came out with his two ponies and they proceeded to essentially turn in circles and look bored. Those beasts weren’t the only animals under the big top, though; there were also two dogs that came out at one point to dance with a couple performers. And that was the extent of the animal acts. There was a dude who spit ping pong balls out of his mouth and caught them, which was a pretty cool trick, and a pair of tiny Chinese twins in matching body suits who shoved themselves into what were essentially trash cans with no bottom, and a Russian woman who did acrobatics of a sort with ribbons extended from the ceiling. While all of these were impressive in their own way, I couldn’t get past the fact that it all lacked a certain oomph. There was a group of young male acrobats who did an abbreviated trapeze act for the finale, but they ended up falling into the safety net more times than they succeeded in completing a trick. And, once again, the tiny space made for a pretty lackluster performance.

That said, none of these folks were the main attraction. That honor goes to Bello Nock the clown. He sports a sweet Kid ‘n Playsheaf of hair (to which Hipster Jr. asked why the guy was wearing a paper bag on his head) and looks bulkier than he probably is under his wacky clown outfit. He’s not so much a clown, really, as a goofy acrobat. There’s no seltzer bottle to the face, giant floppy shoes or even a squirting flower. He does, however, join other performers in things like the double hamster wheel of death (or whatever it’s called), the trampoline of ultimate bounciness and various other not-so-death-defying apparatuses of death. He was joined in his celebrity by Grandma the Clown, who was a stout dude in an old lady wig and face paint, and a ringmaster who reminded me of a kind of inexperienced Jerry Seinfeld. Grandma was especially odd, as her/his one talent was apparently doing flips, which he showed off after 90 minutes of doing nothing particularly funny. And the ringmaster was like the CIT version of a camp counselor or the starting JV quarterback—almost there, but not quite ready for the big time.

Overall the kid liked it okay, but was more into the weird lightsaber looking things and wacky lightup glasses being sold by the random carnie freaks than the show itself, and the overwhelming noise of the live band almost drove him to a five-year-old nervous breakdown, but the flying Vodka brothers finale brought him back from the edge just a bit. But, honeslty, the best part of the night for him was the crowded ride on the E train up to Lincoln Center. It would have been a lot cheaper had I known… 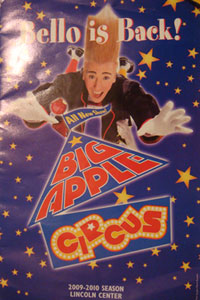