So we roll into the airport in The Dominican Republic, four adults and three children all told. The tarmac onto which we descend was probably not unlike an angel falling from the pillowy clouds of heaven to the smoldering cinders of the bad place. My shirt caught fire and dropped from my pale shoulders in a melted mass of poly-cotton sludge. 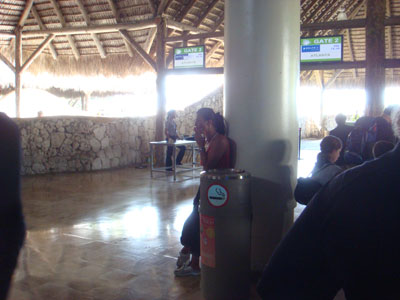 Walking into the thatched hut (past the beautiful ladies with their Polaroid cameras, giant smiles and visions of cashola dancing in their chestnut eyes) that subbed for a terminal in these parts granted us little reprise. It turns out mammoth fans mounted akimbo on hut ceilings do little more than blow sweltering humidity to and fro in a quite wasteful and useless manner. We posed for the family portrait–to be collected upon our departure from said hut on our way back to the lush Garden State–and tried our hardest not to look like the bedraggled heaving tourists that we were. Several lines and passport revealings later we boarded our waiting minivan and embarked on our journey to the resort we would call home for the next five nights and six days.

I was seated up front with the driver because it was decided my six years of high school and one year of college Spanish made me the most qualified and experienced Spanish speaker in our crew. It turns out my five-year-old son would have been better suited to the task, but I managed to pigeon-speak my way through a 40-minute ride with a driver who spoke literally not a word of English. Not a word. It turns out if one nods, furrows one’s brow and combines it with some guttural noises that resemble “uh-huh” and “si” and “aye” that it can easily be substituted for comprehension and make others in one’s company believe he or she is actually contributing to a dialogue about (at least what I believe was) the beauty and history of the Dominican Republic.

Having been booked solely by Ms. Hipster and the wife in the other couple, I had little to no understanding of the topography, annual mean income, racial makeup or general lifestyle of our host country. It turns out that it looks much like the small villages and towns in Mexico, but on what seemed like a smaller scale, and mixed with some Caribbean cultural references that give it a colonial flavor that’s missing (thankfully) on the Yucatán Peninsula. And why wouldn’t it be, you clueless ethnocentric douche (I say in my internal voice), the two cultures are totally different, have different ancestral lines and are not even geographically close? And then, after wending our way through dusty towns, bumpy roads, signage straight out of the 1950s and folks who honestly looked like they could use some of our tourist dollars, we came upon the guard booth, surrounded by high walls and backed by the visage of lush greenery, whizzing golf carts, pale European legs and the smell of chlorined loveliness. And this is the last of the outside world we’d see until our same driver chauffeured us from the gates on our way back to the thatched airport.

Once sequestered behind the inviting walls of Paradisus Punta Cana,the rain rolled in. Yet there we stood ankle deep in the kiddie pools, wrapped in soaking towels and finally getting to the bottom of that Vietnam-era myth of it raining up. Hell, we were on vacation, paying through the nose for our accommodations and at the mercy of children impervious to pruning and a bone-chilling soak. We would spend a lot of time at that pool in the coming week, though not in such a downpour.

And, being the parents of the year, we abandoned our children to a random babysitter (supplied by the hotel) the first night in The D.R. to go eat at one of the less than promising all-you-can-eat restaurants on campus. The young sitter, as it turned out, beguiled and delighted the boys with her easy smile, shy demeanor and good looks that the resort clearly recruited from the throngs of beauties that seem to be in endless supply in the surrounding villages, towns and cities. Where else and how else would a local make a comfortable living other than watching the children of Europeans and Americans wealthy enough to afford that Jacuzzi tub and double marble sink? We bid the kids adieu and crossed our fingers that we wouldn’t come back to absolute chaos (or a ransom note) and headed downstairs to check out our options for dinner.

And this, as it stood, was what became a running joke—in a trying-not-to-cry sense—our entire visit. It turns out that the food at all-inclusives is not the draw. Granted, when left alone in my adult years, I make myself what was termed a ‘banana-eggy’ back when I was five and consists of a cup of milk, a banana, a table spoon of peanut butter, a raw egg (now skipped in my smarter, non-70s recipe) and occasionally some frozen yogurt or ice cubes if I’m feeling bloated that day. So food is all relative to me. We chose from the twelve restaurants available to us, salivating at the thought of all those options. The common wisdom, as noted, started to make all too much sense as we ran across dishes like “discus of cilantroed bull spleen” and “rhombus hare jacketed in cabbage spears,” along with “cylinders of green chicken” and “beefy pasta spirals in a suze of jackal.” Our hopes started to fade. We threw a dart at the book and landed on the steak joint. I won’t harp on the food too badly, but suffice it to say that while my steak was fine, the salad bar was one of the weirdest things I’ve ever seen. There were gelatinous piles of stuff, sweaty cheese, and unfortunate misspellings and/or namings of some of the items on the bar. Apparently, even in a country where our babysitter spoke perfect English, the restaurant staff couldn’t think that they might want someone to double check that “roast of beast” wasn’t gonna sound so good to their paying guests. And so went the week in food. TO BE CONTINUED…