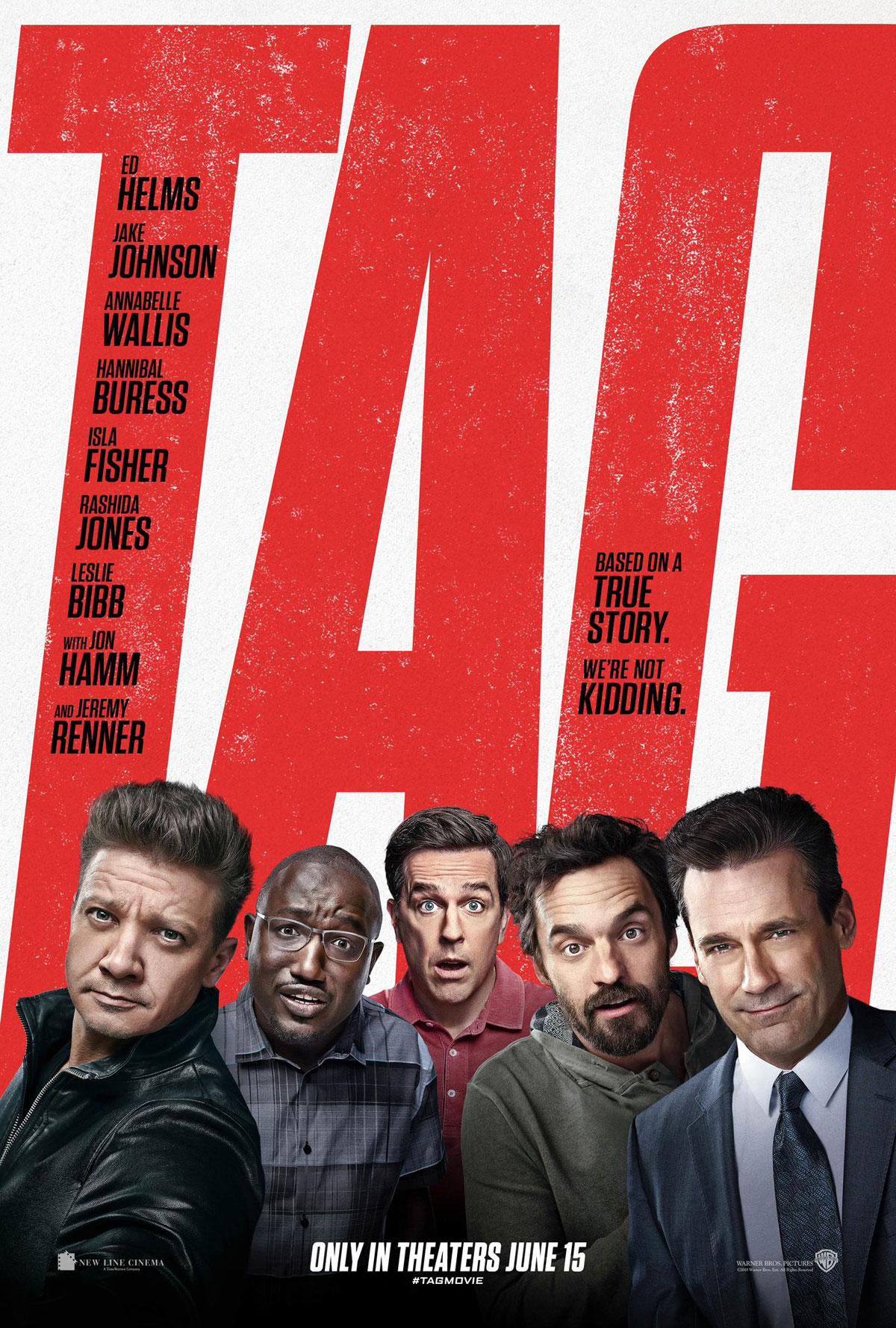 What else are airplanes for other than to watch stupid fucking movies? I mean, would I actually pay to stream this movie at home, or, god forbid, buy an actual theater ticket for it? We all know movies are for animated features, Ant-Man movies and Black Panther. Jeez. Because who in their right mind would want to see a movie about a bunch of middle-aged guys playing tag? In a movie entitled Tag? Even with a strong cast, this thing seems thin on narrative and even thinner on concept. And there’s only so many nut shots one can stuff into a film before it becomes a movie that should be called Nut Shot: You’re It!

Okay, let’s start with the fact these dummies have been playing the same game of tag since they were nine years old. Jon Hamm and Jeremy Renner were nine in 1980. In 1980 Ed Helms was six, Jake Johnson was two and Hannibal Buress was negative three. That must have been some game. Or some shitty casting. If I were Hannibal I’d be like “So, you’re having me, a 35-year-old man, play a 47-year-old? Fuck you guys.” Seriously, did Dave Chapelle drop out? At least he’s 45. I suppose Jake Johnson is used to the insults and can take being cast as seven years older than he actually is, but it’s glaringly obvious from minute one that these dudes not only don’t look the same age, but that they clearly didn’t grow up together. Technically they place 1983 as the year they started, so maybe Hannibal played tag as a late-term fetus or a newborn. But at least they made Hamm and Renner three years younger than they actually are. It’s an absurd premise that is made even worse by the lack of cohesiveness between the characters. I will go to my grave with the belief that these dudes were never and have never been friends. Especially of the life-long variety. Not even pretend, actory ones.

The thing is, the movie is actually worse than it sounds. It’s not funny, the actors seem to essentially just be going through the motions and there is absolutely no payoff to anything at all. They try the heartstrings thing at the end, but they’ve strained credulity to the point that we just don’t care. The whole narrative is a bunch of feints and jokes about how awesome Renner’s character is at tag, but I think it comes down to his friends actually being idiots who are just really bad at tag. And at life for the most part. I mean, they decide to crash the dude’s wedding after not being able to tag him for 35 years. If you literally can’t lay a hand on a single individual for 35 years, you kind of deserve to suck at life. I know it’s all in the name of comedy, but, again, this movie only purports to be a comedy and doesn’t actually do much that’s comedic. What it does instead is stumble from scene to scene filled with poor screenwriting and lame attempts to push the narrative forward. I actually feel bad for the writers, who were clearly not given much to work with. What’s funniest, actually, is that they have each guy essentially play the character they’re typecast as. Renner the serious badass. Ed Helms the jackass. Jake Johnson the stoned mess. Jon Hamm the buttoned-up, smooth-talking guy. And Buress, the kind of mumbling nervous dude who just wants everyone to get along. There’s also a beautiful blonde woman who plays the reporter who originally got the “Tag” story (as it’s based on a WSJ article about a group of real dudes), but the issue is the reporter was actually a guy named Russell Adams and he is neither blonde nor leggy. It makes absolutely no sense for this reporter character (who, in all honesty, comes across as a pretty terrible reporter) to be in this timeline, or exist at all, but it’s just one more throw-away in a movie filled with throw-aways.

This thing had no business getting made. It serves very little purpose and, even as an airplane movie, was a general waste of time. I should have known that from jump, of course, but that’s what happens when you take a chance on a movie whose dumbass poster should have been a dead giveaway that the movie was going to be a joke.