Maine is a weird state. Dangling precariously into Canada and the frosty white caps of the North Atlantic, Maine somehow drags millions of tourists every year to the precipice of the United States to freeze their asses off and eat lobster.

My only prior experience with our great white neighbor to the North (and we mean white, as in caucasian) was during a college visit to Colby where it was so cold that the transmission fluid in our car froze solid. That was the kind of cold I have yet to experience again–and I went to school in Syracuse for God’s sake.

Kennebunkport itself is a little tourist/vacation village in Southern Maine that essentially doubles the price of seafood at all its restaurants in order to make itself seem exclusive. In fact, I ate so much overpriced lobster, shrimp and scallops, that I really have no desire to eat anything from the sea ever again. I could still eat some rockin’ clam strips from The Clam Shack, but I’m not sure my arteries could take it.

While being surrounded by silver haired folks in L.L. Bean garb is a little strange in itself, the full creepiness of this town didn’t reveal itself to me until I walked into some place called The Lobster Pot, or The Lobster Shack or Hut or something, and they had these postcards on display… 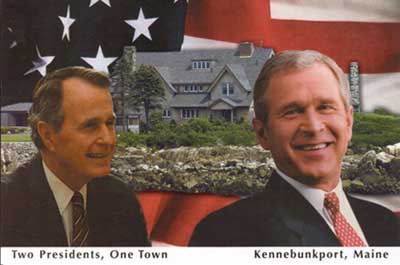 Anyway, I knew the Bushes hung out in this town (you can see their house right there in the postcard), but in a laughable bit of irony, this is apparently the same house in front of which Bush Jr. got arrested for DUI back in 1976. His Alfred E. Newman “what me worry?” smile in this postcard indicates that he has no recollection of this event–the same way his dad had no recollection of selling arms to Iran to fund a revolution in Nicaragua. Maybe he’s just happy that he got a deal on socks at one of the outlet shops in nearby Kittery.