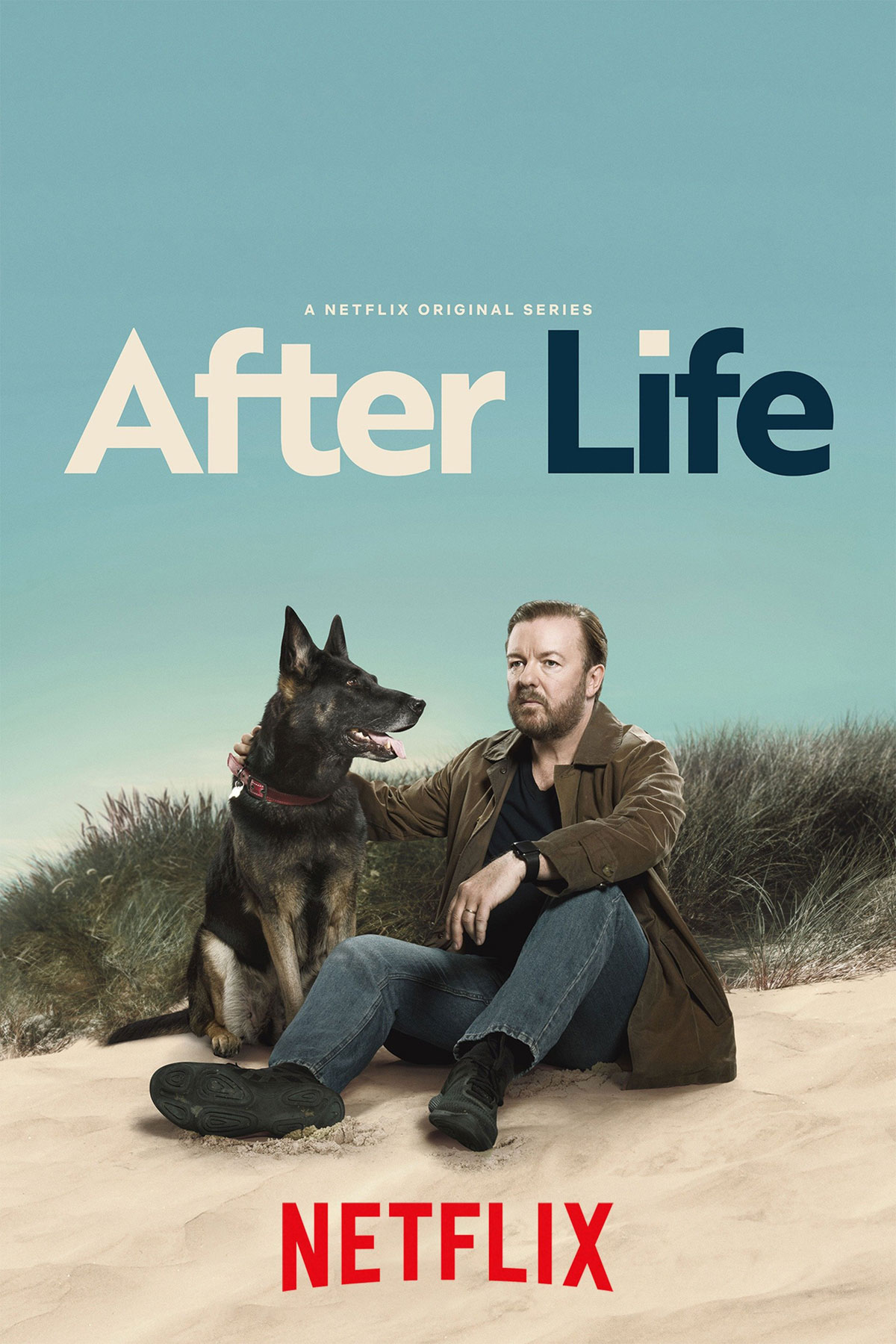 It’s kind of interesting watching something like After Life with another human being. Albeit one with whom you usually agree. Especially when it comes to television shows. But, like its creator/star, Ricky Gervais, this one seemed divisive. Some people find the dude funny. Some find him repulsive. I think — if you asked him — he’d be fine with this dichotomy. His humor can be dry. It can be biting. It can, at times, be downright offensive to those who are easily, or even moderately, offended on the reg. So that’s kind of what I assumed this show would be. Ribald. Atheistically aggressive and godlessly pointed. All things that I’m generally fine with and supportive of. Granted, some of the cringe he sticks in his stuff is a little too much for me. But I do enjoy some of his sarcasm and poking fun.

This ain’t that show. I found very little of it funny. Which I expressed to Ms. Hipster half-way through. Curiously, she found my opinion completely off-base. “You don’t find any of this funny?” I mean, sure there were little moments of levity. But even that is super-dark. The rest of the show is sad-ass Gervais watching videos on his laptop of his dead wife. Or generally being priggish to his friends and co-workers. He’s a miserable sod. But everyone forgives his constant threats of self-harm and absolute buzz-kill nature because he loved his wife soooooo much. I mean you can see that love poured into his dog, whom he also speaks narrative exposition to. But mostly he just goes on these awkward monologues about how amazing his dead wife was. For three seasons. Honestly, I think the whole thing is supposed to be super-earnest. But coming out of his mouth, with his acting style and the constant firehose of woe, it feels mind-bogglingly saccharine and, like I said, awkward.

The weird thing is, I thought I’d find a kindred spirit in Ms. Hipster. She knows all about this maudlin spouting by middle-aged men. And I thought she’d find the whole thing just too much. After all, I found it difficult to sort out the humor from the melodrama. Alas, she did not. There is no plot other than this. Gervais’ character, Tony, works at a free newspaper in a tiny village in England. We see him interact with the small staff (including one woman who mysteriously exited between season with absolutely no mention of her). And the town prostitute and mail carrier and this other woman he meets when sitting at his wife’s grave every day. Opining on relationships with dead people and depression and sadness. Always. Constantly. The music would kick in and we knew it was time for Tony’s eyes to slope one way or another, tear up and go on and on about Lisa (Kerry Godliman). There were times when I had the remote in hand almost tempted to fast forward through these scenes. Which happened at least twice an episode. Each of which is between 25 and 30 minutes or so. Man, that’s a lot of dead-person talk.

Back to the “funny” thing. Tony is kind of a bitter asshole. That’s his bag. I mean, people are always telling him what a sweet guy he is. Just so we, as the audience, don’t take his rudeness and biting sarcasm as his normal way of being. Again, we do see Tony pre-Lisa’s-death in these videos. And he is a prankster constantly messing with his wife, but always laughing and smiling. Now, post-Lisa, he’s more of a nihilist. Which allows him to essentially have no filter, say exactly what’s on his mind, but also just not care if other people are, say, prostitutes or idiots. He’ll call them idiots and be fine with it. After all, his imminent suicide is always lurking in the background. He could be dead any second, so why care if someone is a moron? It’s all very Gervais, this part. This disregard for people’s professions, proclivities and weirdness is supposed to be the funny part. His put downs, his shrugs at the local dummies he has to profile in the paper he writes for. This is the stuff that is on occasion amusing, but funny isn’t quite right. Despite Ms. Hipster’s protestations.

I kind of found the show to be a drag. It’s incredibly repetitive, and the watching old video of a loved one who’s moved on is really, really tired. I think Tony is also supposed to be a drag. He’s only animated when he’s interacting with his old friend and co-worker, Lenny (Tony Way). Which essentially is him just riffing on how odd Lenny looks. Which he does. Otherwise Gervais litters in some quirky characters in this small town — all of which are kind of sad and lonely in their own ways — in order to keep us from falling into the pit of despair with him. The sex worker, the incredibly bad mail carrier, the hoarder, the adult child who plays dual recorders with his nostrils, the reaching-middle-aged female co-worker who fantasizes about being in a relationship with Kevin Hart. They’re all cute and stuff — and the actors are all funny in their own ways — but I do really feel like they’re fillers to just surround sad-sack Tony and his suicidal ideations to get him from “I loved Lisa so much” speech to “I loved Lisa so much” speech. The overly-earnest nature of it just felt off to me — especially coming out of Gervais’ mouth. It was like any minute I was waiting for him to do his devilish smirk/giggle and let us in that this was all just him punking us, and that we shouldn’t be such saps. But, no, he plays it straight.

Look, After Life is by no means a bad show. It has its merits. It definitely has some of that quiet, twee British humor thing going on at times, like Detectorists. And some of the actors, like Diane Morgan and Roisin Conaty (as the sex worker, Daphne) are delightful. But it’s the odd clanging dissonance of Gervais that threw me off. Not the disharmony of his performance with the other actors per se, but his performance’s disharmony with Ricky Gervais the comedian and person we’ve come to know. I can imagine that the first people to read one of his scripts stopped during one of his pathetic diatribes to ask “And this is where he turns to the camera and really zings us for being morons for believing this claptrap, right?” Only to go back to the script to realize there is no zinger. No clap back. No spark or spirit. Only this deflated man who misses his wife and chooses to tell everyone about it at every single opportunity. And so on.