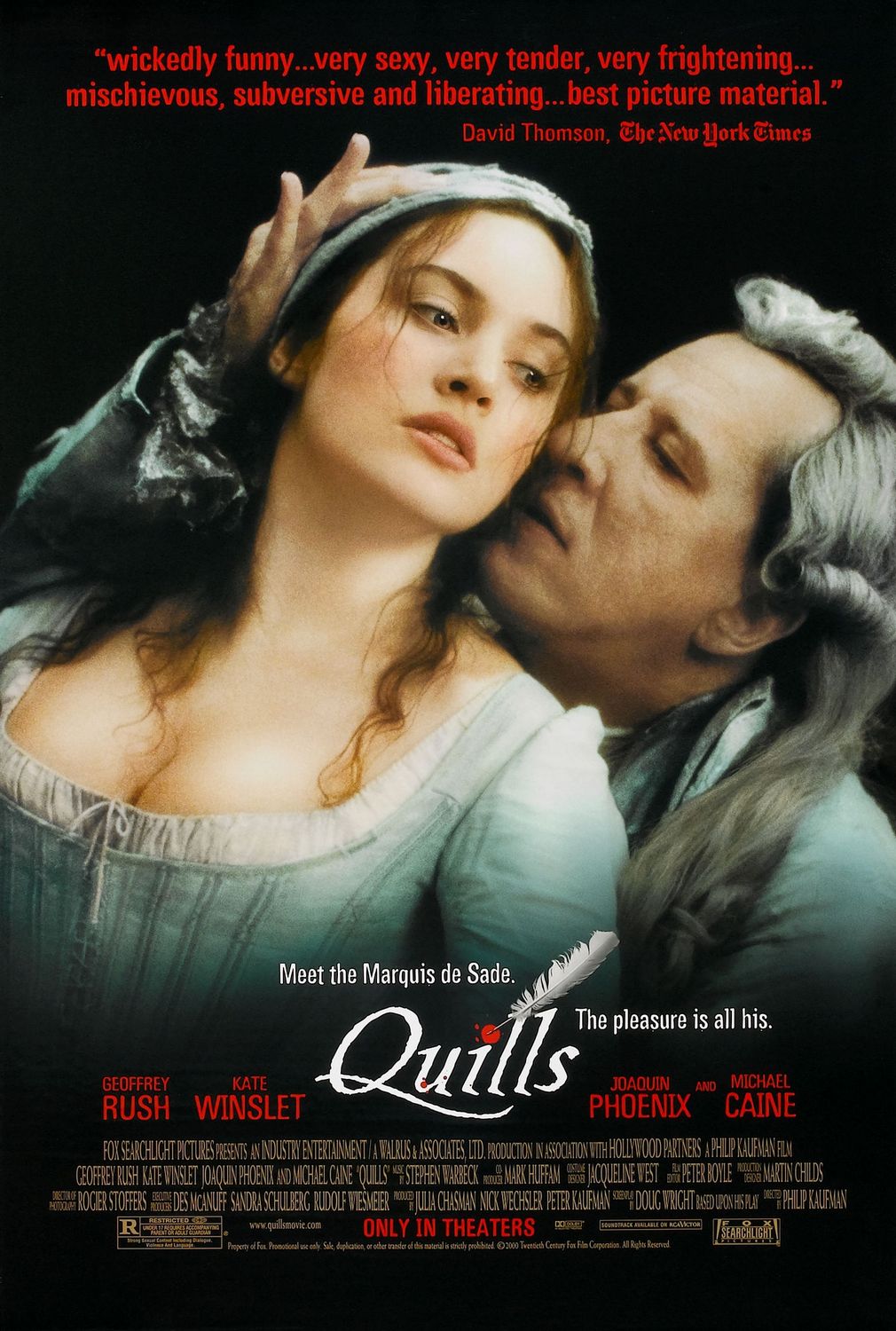 Ugh, there is really very little redeeming about this movie. Okay, Geoffrey Rush is a good actor, Kate Winslet’s fair, and you get to see her naked… but this does not a movie make. Joaquin Phoenix overacts, bugs his eyes out and screws up his mouth a lot — a performance that is indistinguishable from his turn in Gladiator. He really is over the top, and when you add in stilted, ridiculous dialogue to boot, the results aren’t very pretty.

I’m truly amazed that people liked this movie. I swear that people pretend to like films because they feel they should. Ooh, it’s got a mostly English cast, and doesn’t have explosions — it has to be art! I say we call crap crap.

So you have this guy, The Marquis de Sade, who is a sick, twisted individual. No, he’s not this crusader for free speech that they make him out to be in the film. The guy was arrested for basically raping and torturing a woman, as well as poisoning others during a manage a trois and attempting to sodomize another. Wow, what a swell guy. This definitely sounds like a character we should sympathize with. Certainly a guy who would elicit the attention of an innocent washerwoman like Kate Winslet. It’s really disturbing how movies romanticize utterly despicable historical characters. Did you know that Ted Bundy really loved classical music and was just a misunderstood romantic guy? Come on.

So, de Sade is portrayed as this tortured soul who just yearns to write, to share his thoughts, to get them out of his head. We are given the idea that he is in jail for merely writing down controversial thoughts. Um, no. Granted, his writings certainly didn’t help his case. If the Marquis were around today, he’d be the guy in the trenchcoat jerking off on a park bench to a crowd of secretaries eating their lunches. Worse, he’s the guy who would drop GHB into a woman’s drink at a bar and rape her in the coat closet. By every account, the guy was just a manipulative sexual deviant who cheated on his wife with every manner of prostitute (man, woman and child), loved blood play and enjoyed forced sodomy. Sounds like a hero, eh? Also reading up on The Marquis, this history is not even close to how things actually happened. Whatever.

So, according to Quills, The Marquis is locked up in an insane asylum for doing something we don’t really know about. He befriends this innocent woman who takes out the laundry (Kate Winslet) and gets her to smuggle out his stories of sadism and sex to a publisher. Blah, blah, blah. They figure out that these banned books are coming from The Marquis. And Abbe, the director of the asylum, takes away his quills so he can’t write. They also send in Michael Caine to “cure” The Marquis. Without his quills, The Marquis starts losing his mind, as he can’t get the evil, sadistic thoughts out of his head. So he figures out a way to write a book on his sheets using a chicken bone and red wine. Another annoying point: this one sheet full of rather large writing somehow turns into a novel. Later, after his sheets are taken away, he writes an entire novel in his own blood on his clothes. Again, there is no way this small amount of writing turns into a thick novel. Ridiculous.

Meanwhile, Michael Caine’s character marries some young orphan and basically forces himself on her. Also, his “cures” include dunking people in water, an iron maiden looking device, and other torture. Is this supposed to be subtle? Great, they’re both sadistic individuals. Who cares? Meanwhile, I’m not really sure what point the filmmakers are trying to make. On the one hand, they are saying that the voice of free speech can’t be squashed. On the other hand, everyone who reads The Marquis’ books or comes into contact with him seems to become sexually deviant. The innocent washerwoman allows The Marquis to slobber on her and fondle her. Michael Caine’s wife reads Justine and wants to give the architect a hummer, an asylum inmate sees one of The Marquis’ plays and tries to rape Kate Winslet, the Abbe (a priest) almost breaks his vows of celibacy, etc. Are they trying to back up the religious right who say that violent and sexual images make people want to be violent and sexual? Again, whatever. Anyway, I don’t get the point of the movie, I don’t sympathize or care about any of the characters, and I was really getting sick of seeing Geoffrey Rush’s skinny, white ass.