So, where was I? Oh yeah, we went to England so we could throw shit at David Blaine. We brought some rotten tomatoes, a twelve pack of raw Sabrett hot dogs and a thirteen pound small mouth bass. We figured this would both disgust and tantalize the man who had pledged to stay in a box suspended by a crane near the Tower Bridge for 44 days. Unfortunately our booty didn’t make it through customs, and I was branded a lunatic and almost banned from the European continent. It turned out I had to merely stay at least one hundred yards from Mr. Blaine and sign up for some anger management courses. This British Channel, Sky One, which seemed to be somewhere on the sliding scale of quality between E! and The WB, broke into their programs to show updates of this serial model-dater looking sleepy, then groggy, then suicidal. For fear of being wrangled by Interpol, this is the best picture I could get of our friendly magician: 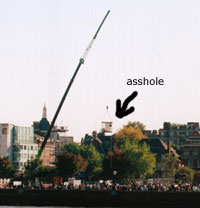 After finally seeing this guy emerge and cry his eyes out like a big f’n baby on national TV, I have even less respect for people who think making spectacles of themselves (without being drunk) constitutes magic.

So we move on to drinking–naturally. England is a country of many pubs and bars. We went to places called things like The Crown and Two Chairmen, The John Snow, The Endurance, The Dog and Duck, Alphabet, and Electricity Showrooms. These places ranged from typical English football-watching pubs to trendy East Villagey-type bars to local beer and darts joints. There was lots of beer, lots of wood and lots of smoke. The best part? No tipping! No longer did we feel obligated to give a twenty-five percent tip to a person behind a bar for popping the top on a bottle. No longer did we have to put up with empty-headed, flirtatious barmaids who think they’re going to suck an extra dollar out of some dorky dude in jeans and white sneakers. It’s a win-win situation for all of us–except the damn smoking. Oh, and everything closes at eleven o’clock. Nothing like an early closing time to encourage raging alcoholism. Dinking starts hard at five and continues through dinner until you stumble out of the bar in time to catch the nightly news. Of course, we f’d it up every night and end up having about three hours to pack in six hours of drinking. Damn us Yanks. Plus, these wacky folks let your bring your beer outside. Now that’s progressive.

The one weird thing about England is the lack of human interaction. Yes, Mr. Hipster got no love. Not a look. Nothing. People in New York are constantly looking around at other people. They’re people watching. They’re checking each other out. The Brits don’t look at anyone. There’s no staring or even sideways glances. I checked with Mrs. Hipster, who, despite wearing the “come hither” low-riders, didn’t even warrant a “hey baby,” a wolf whistle, or even a creepy eyebrow wiggle. Very odd, indeed.

All in all, visiting London is very much like visiting NYC. Granted, the food is much, much worse, the bars close five hours earlier, the prices are even higher, most everyone is white and has the same haircut, the people walk even faster, the buildings are older, and the citizens have funnier accents. Go for it, and tell ’em you know David Blaine–they love him.