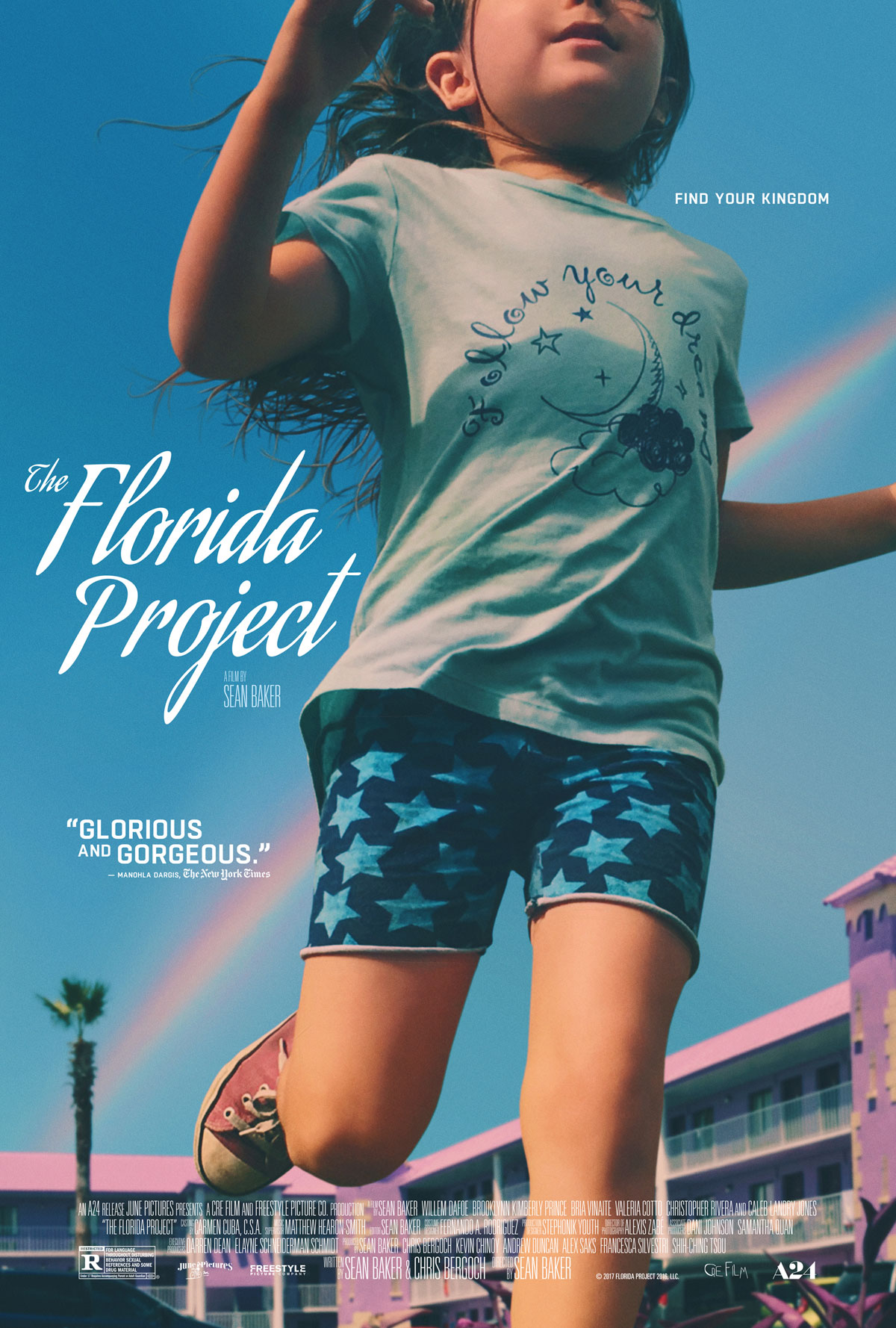 I hate Florida. No, seriously, it’s a canker in the mouth of the United States and its general culture needs to be destroyed. Although, to be fair, it has provided me with many entertaining hours of COPS and YouTube fails. Three of my four grandparents lived there during their lifetimes and I visited as a child, went there for one spring break and two funerals and haven’t been back since. The Florida Project doesn’t really do much to make me want to go back, to be honest. Granted, my family wasn’t living in cheap motels, but the feeling of a cheap motel kind of hangs over the entirety of the state.I sat with this movie in my queue for a while, thinking it was some sort of experimental film or documentary based on its title. Turns out I was way off, and this is a pretty straight-forward family drama about a young woman and her young daughter trying to survive life in the sunshine state. Just miles from the Magic Kingdom, Halley (Bria Vinaite) and her daughter Moonee (Brooklynn Prince) are subsisting in the Magic Castle motel, which is a giant purple Barney-looking thing surrounded by other similar fourth-tier tourist motels in lovely shades of coral and sea foam all with similar cheesy themes vaguely based on either space travel or Disney World. Halley is a dirty-mouthed out-of-work stripper who lives hand-to-mouth on scams and some other no-so-legal things. Her daughter spends her summer days wandering around the hot parking lots, abandoned condos and various other relatively depressing and gross Florida stuff. Now, these are six-year-olds wandering around unsupervised. Which would seem completely odd, but for the fact that Moonee is almost as foul-mouthed and brash as her weed-smoking mother (but with way less tattoos). Granted, this is just learned behavior and a survival mechanism. She begs money form locals and tourists to buy ice cream and is precocious beyond her years.The movie is incredibly naturalistic. From the way the thing is shot, to the soundscapes to the acting style, it almost takes on a documentary feel as we get to peek in on the inner lives of the daughter and her one or two friends just kind of making it through the day. I’d say we see Moonee eat about 42 pounds of food throughout the film, as there is a really big focus on edible things for some reason. But I guess when you’re a mother trying to make ends meet, the things that cause you the most stress is feeding and housing yourself and your child. So Halley worries and talks a lot about food and the rent, both of which always seem tenuous.So why, you ask, would this be in any way interesting? The answer is that it probably isn’t from scene to scene other than watching the young actress who plays Moonee act is pretty amazing. And Bria Vinaite, in what amounts to her first acting role, is completely believable as the trashy, desperate mother just trying to get by. And Willem Dafoe, who gives an amazingly constrained and nuanced performance as the motel’s manager, makes you wonder why he isn’t in every movie. Seriously, the guy is great. He jumps off the screen as usual, but in a role that could have easily gone cheesy or overly sentimental he plays it like a real person and makes the character feel like a real Florida motel manager with a heart. Which, trust me, is much harder than it sounds.The whole look and feel of the film is not like a lot of other films I’ve seen. It’s the real side of the Disneyfied version of the world that people come to the area to enjoy. Meanwhile, Moonee and her friends are forced to create their own fantasy land using only their legs and their imaginations, but are shielded from their bleak realities in the process. Until they’re not. And the result is heart-breaking. Literally, there is a scene at the end of this film that, having Hipster Jr. Jr., who was Moonee’s age only a few years ago, was more wrenching to me than any I’ve seen in years. And there was no swelling music and obvious bullshit, but a culmination of a world of make believe crashing down and an incredible feat of acting by a young child that reminds you that her character is just an innocent six-year-old child and not the smart, resourceful child that we think is above the nonsense of her own life.Ultimately, this film is subtle and effecting. It’s an original tale that is not high concept, filled with stars and doesn’t end with violence or New York City being destroyed by aliens or superheroes. It’s a small, somewhat quiet movie that plays like something a lot more. I’ve never seen anything else from writer/director Sean Baker, but if the dude can continue to make art like this, I predict great things for him in the future. And for the new cast as well. Good stuff.