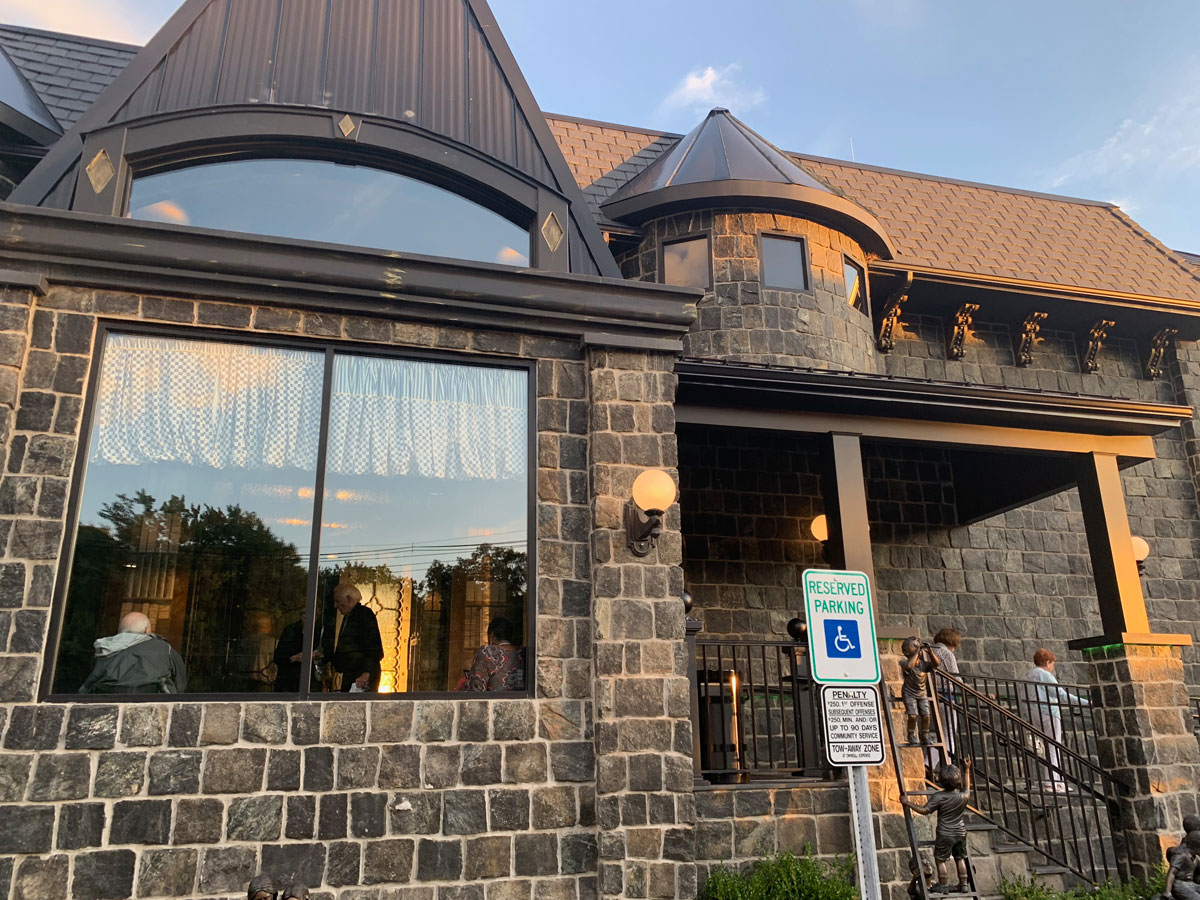 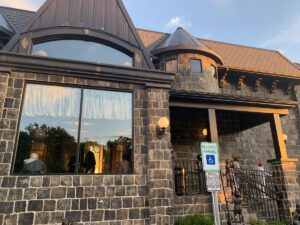 Once upon a time there was a shitty, little diner on a hill. It was called the Eagle Rock Diner and it sat atop what in NJ qualifies as a mountain range or something. Whatever you call it, the location has an incredible full-on view of Manhattan. The entirety of the skyline just laid right out there. I imagine this is a pretty damned valuable piece of land. So, it was weird that this broken-down restaurant that served sad breakfast remained on the spot for so long. Until 2015, when it didn’t.

And in came the bulldozers and the little diner on the hill was no more. In its place sprung up this absolute atrocity. This bizarro Disney castle that looks like an incredibly overzealous haunted house designer thought would make for a rad dining experience. It’s a very odd choice, this heavy stone fortress of a building. I don’t think there are actually any gargoyles outside, but I wouldn’t be surprised if they were, in fact, lurking there under the eaves.

The insane design choices don’t stop with the outside. Walking into the diner, your eyes are assaulted by what feels like an Alice In Wonderland acid trip. Competing and clashing patterns fight for space all over the place. On the walls, on the booths, on the lights. Everywhere. Checks next to stripes next to florals and fleur-de-lis. It’s ugly as hell. The space — which is basically just a giant, high-ceilinged box — takes liberties with patterns in a way only a blind asylum inmate would come up with. The only thing breaking up the chaos are large screen televisions mostly broadcasting sports, which is also kind of an odd choice.

I told Ms. Hipster the whole place reminded me of something out of a Tim Burton fever dream. She scrunched her face and said, “No, this was done on purpose. This is Mackenzie Phillips.”  “The woman from One Day at a Time, daughter of The Mamas and the Papas dude?” “Not her. Uh, MacKenzie-Childs!”

Turns out there’s this manufacturer of ceramics and stuff that is indeed called MacKenzie-Childs, and all their stuff looks like a toddler got ahold of Quark and whatever kind of machine makes wallpaper. It’s a bold and somewhat unappetizing decision that is bound to turn some patrons off. But, based on the folks I saw there, odds are they didn’t go as deep as I did on this and they most likely just think it’s just delightfully quirky.

The service started off not bad. It ended not as good. Our server was very nice, but seemed to lose his place later on and disappeared amongst the swirl of servers (of which there seemed to be about 200). We’ll cut him a break; he probably became disoriented because of the dumb mixed-media design aesthetic. The whole experience is just kind of confusing. From the little olive-laden pitas and olive oil they drop on the table gratis, to the not-really-a-diner diner menu, to the prices that are seemingly way higher than I’d expect anyone in the area would be comfortable paying for mediocre grub, it all just feels like a miss at first glance. My tuna melt was not really a traditional tuna melt. There were raisins in the coleslaw. And the carrot cake did not at all have the consistency of cake (though they were kind enough to leave the raisins out of it).

Anyway, if you’re looking for a true Jersey diner experience, this ain’t it. If you’re looking to mess with your brain a bit and overpay for the honor, then come on down to the Chit Chat Diner and grab yourself a booth with a view (or one without one like ours.) But, honestly, beware of the creepy, life-sized Three Wise Monkeys bronze on the bench outside. I almost turned tail and ran before eating a thing when I spotted it. So damn unnecessary.