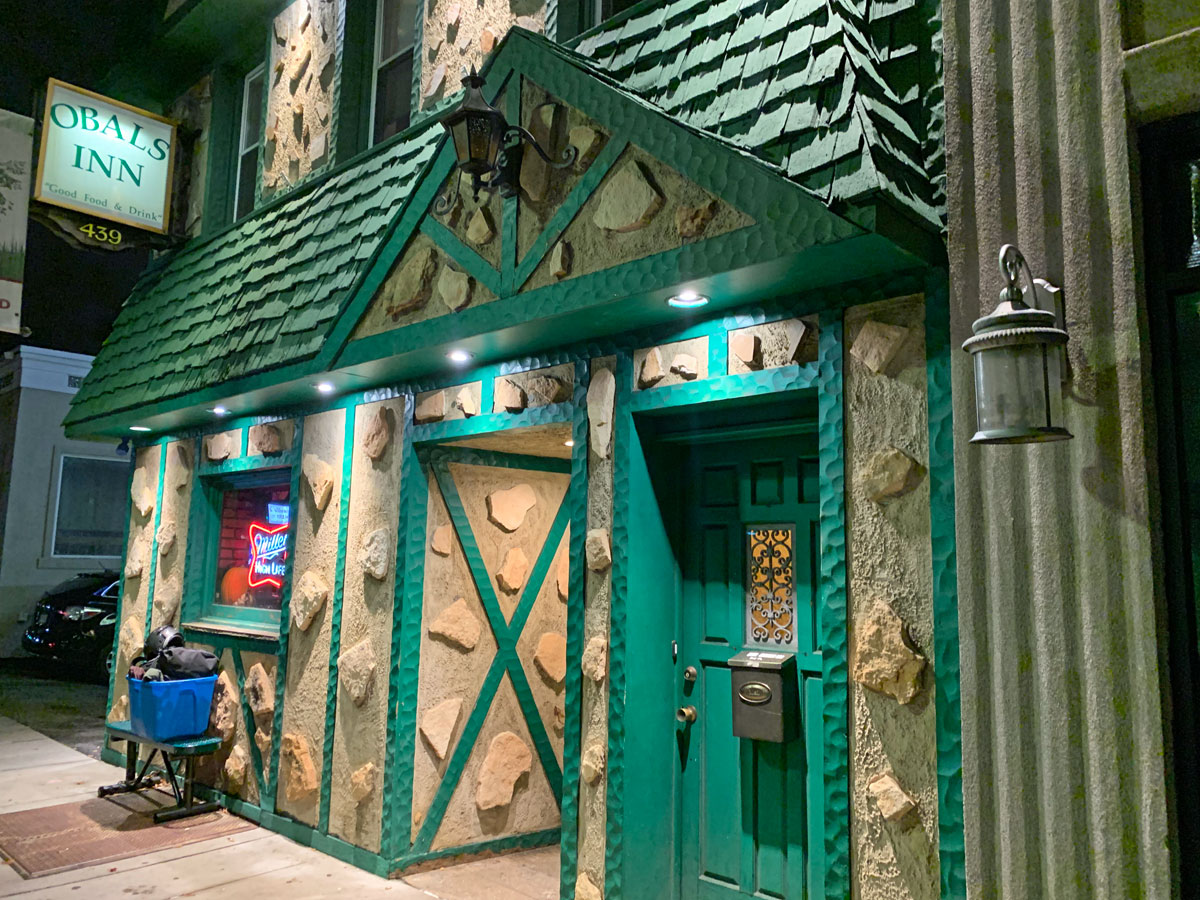 Everywhere you look online Obal’s Inn is classified as a dive bar. I think that assessment is a bit… harsh. Not that “dive” automatically equates to shithole, but generally bar owners who think they’re running a neighborhood joint probably wouldn’t take kindly to people referring to their pride and joy as what amounts to a rundown hole-in-the-wall. Even if the shoe fits. I’m not sure in the timeline of this particular establishment — opened in 1952 by one Mr. Obal and bought off him 30 years later by the current owners — when it took its current dive-like form, but it certainly feels like time froze some time in the 1970s.

From the outside one might think that hobbits or leprechauns are the bar’s target audience. Do hobbits even drink? Not the point, I suppose, but the shire-like exterior is very distinct and a fun and wacky site amongst the urban blight of banks and faceless businesses that surround it. The interior is certainly no great shakes, though. I’d call it fraternity basement chic? And that’s probably me being kind. Though I spent four years in a fraternity basement in the early nineties and can certainly look back at that time as some of the best years of my life. When it comes to listening music, drinking and being stupid, mostly. So I have a real affinity and warmth for the aesthetic, even if others might label it a dive.

We spent our time here in the wood-paneled back room of the bar. Call it the game room, I guess. Equipped with darts, a pool table and shuffleboard, it’s a competitive drunkard’s dream. I think the lighting could use a little bit of a downward bump for a little more of an intimate feel, but I guess that might make darts a little harder to manage. Also, I’m not very good at shuffleboard. I used to play the full-sized version at my grandma’s condo in Florida when I was a kid, but the tabletop game requires a whole different hand-eye coordination thing. I do feel like the placement of the table against the wall cramped lefties going one way and righties the other, but I suppose we’re both inconvenienced equally. Thus ends the sucking excuse section of this review.

My usual dive bar burger and beer in the area is Tierney’s over in Montclair, but they either got overzealous in cleaning their tiny grill, or one of the dudes who used to man the grill there passed away and they just haven’t rediscovered their meat mojo of late. So I was happy to find another option at Obal’s. Their beer list was surprisingly decent for a joint that certainly feels like a Bud and Coors Light kind of bar (though they were inconveniently out of my first couple of choices), and the burger — while not even in the same realm as a Tierney’s burger at its peak — was exactly what one would want from an old school bar burger. We were there on a Tuesday, so the crowd was more of a gaggle or a huddle, but apparently people flock here for the famous ribs and activities on Thursdays. It certainly feels like a neighborhood bar (especially on a Tuesday when we had the very friendly server’s full attention) and not necessarily a destination, so I’m curious what the clientele are like on those more active evenings. I don’t often drink or even leave the house midweek, but after my pleasant experience — eating a decent meal, playing my selections on the juke and learning a new “sport” — I can totally see myself returning to this dive to try to relive that basement time of my life. But with like twelve less beers.