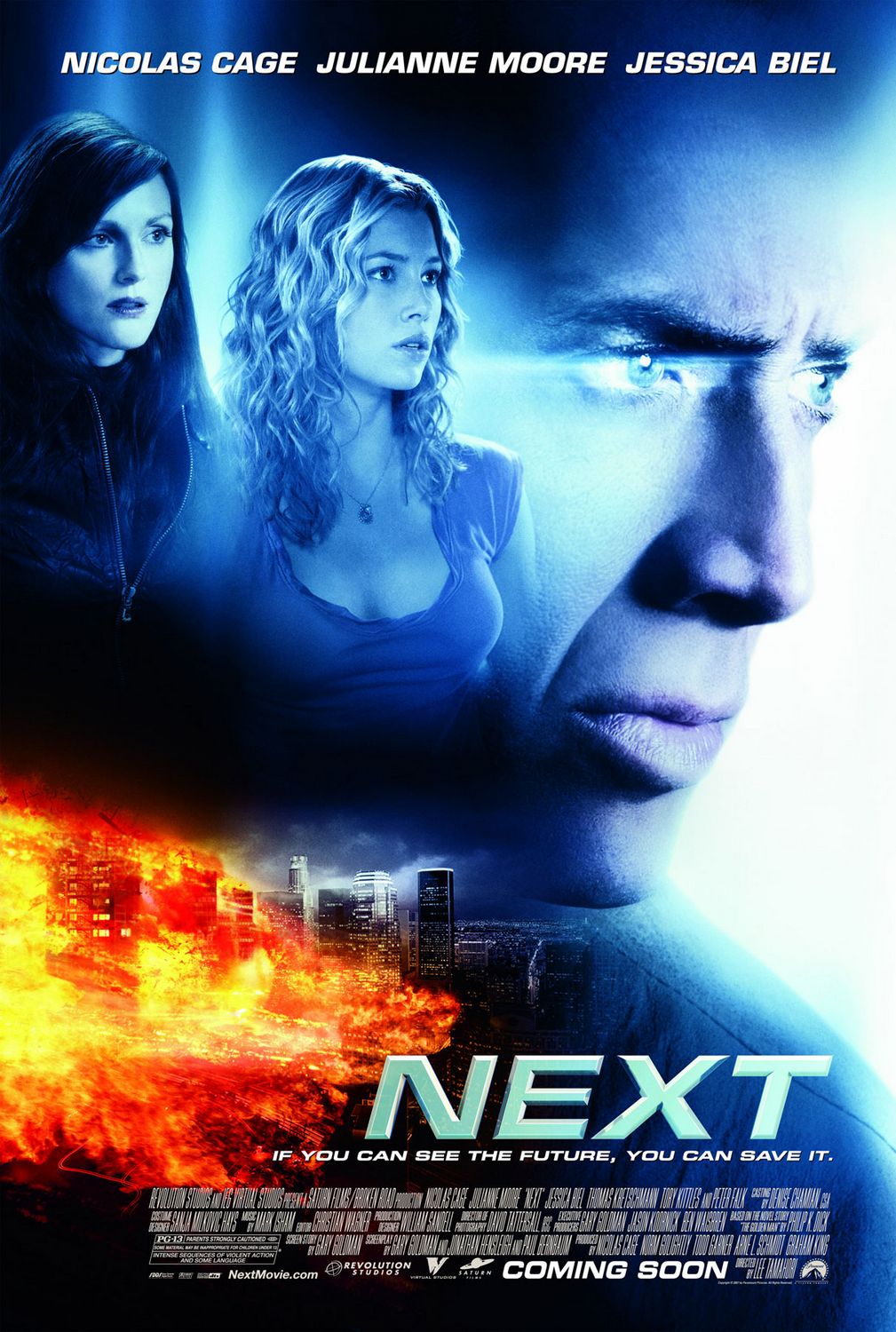 There are some movies that are such an utter waste of time that they hardly deserve a review at all. And then there are others that are so bad that one almost has to shout it to the rafters about what a complete train wreck it is.

First you have creepy, hair-plugged Nicolas Cage, who is actually pretty well cast as a cheesy Vegas magician. Granted, Vegas seems to be his thing what with Leaving Las Vegas, Honeymoon In Vegas, Con Air (crashes a plane on the Vegas Strip). And while he may be in Vegas and drinks a bit, this movie is nothing like those three. This is yet another movie adaptation of a Philip K. Dick sci-fi mind fuck book, and done right could have been a doozy. Unfortunately anything involving Cage and an untrained director these days turns into an overblown farce. And so goes Next.

The one positive is that we have the blindingly hot Jessica Biel to look at for 90 minutes. The bad part is that we get to watch an overly plastic looking over-actor pursue her for those same 90 minutes. Now, making time on a girl 20 years your junior isn’t new for the movies (see Rear Window if you really want to get the dad/daughter heebie jeebies), but for some reason having to believe Biel would ever be interested in Cage is the most unbelievable thing in a movie filled with stupendous unbelievabilities.

So, high concept here (as are most Dick concepts), Cage is a hack magician who claims he can read minds. Thing is, he’s actually really good at it, but he’s not really reading minds. He can see two minutes into the future, which is in essence if you give it enough time, like reading someone’s mind–or seeing the future. So he plays it off as some sort of parlor trick, which along with his lackluster stage presence cements him as a hack. He then goes and uses his power sparingly in the casino to earn walking around money.

And then one day he’s standing at the chip counter in the casino and has a vision of a guy robbing the place. And who sidles up next to him but the guy! He foils the robbery and thus begins an adventure in nonsense.

And the nonsense revolves around the FBI having a need for Cage’s ability to chase down a loose nuke that’s going to be detonated sometime in the near future by some faceless terrorist organization. The plotholes here are big enough to drive a garbage truck through. Regardless, Cage is resistant to helping the FBI due to childhood trauma of being used and tested because of his ability, as well as the fact even he realizes that seeing a detonation two minutes before it happens is pretty much useless. I used to think Julianne Moore could act, but as the stiff and completely ineffectual lead FBI agent chasing Cage she proves me wrong big time. Mix in the fact the bad guys (presumably the same terrorists looking to inexplicably set off a nuke) are following the FBI who are following Cage and you got yourself an “action” movie. Meanwhile there’s this whole side plot involving Biel where Cage can (confusingly and again inexplicably) see anything involving way more than two minutes into the future. He takes this as a sign that he needs to meet her, so he sits in a diner every day waiting for her to show up. Totally random. And, of course, he eventually does meet her and involve her in his whole misadventure. And then we have to watch them do it. Yuck.

This whole shitshow is wrapped up with an awful St. Elsewhere ending that essentially invalidates all 95 minutes that came before it. At least it mercilessly comes to end.