Once again Mr. Hipster proves that he is anything but hip. Yes, this is the stupid whiteboy himself dancing at the Island/Def Jam Christmas party. Now, you say to yourself, of course he’s dancing, it’s a friggin’ party. Did I mention he’s the only asshole dancing… in front of a truckload of Def Jam people who watch people dance and rap for a living? Yeah, he’s cool. 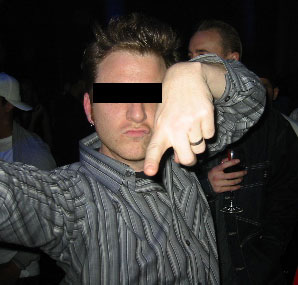 Was I sober? Not so much. Was my hair wacky and out of control? Of course. The funniest part about this whole thing is that this picture was taken a mere two hours before Mr. Hipster was arrested for trespassing in Grand Central. The crime: peeing in the bathroom in the food court. Pretty wimpy, right? Apparently cops have nothing better to do than bust people for ducking under a theater ribbon to use the only public bathroom in the area–and I even flushed the toilet, put the seat down and washed my hands. Okay, so it was the ladies’ room (I think), but the mens’ room was locked, and when you gotta go, you gotta go. The bathrooms were closed anyway, and I doubt any women would be so bold as to disobey the law with the reckless abandon that I did. I’M A FUCKIN’ OUTLAW, MAN! Alright, I’m a pussy (although the cop that busted me did call for backup when he saw my hulking frame immerging from the toilet). 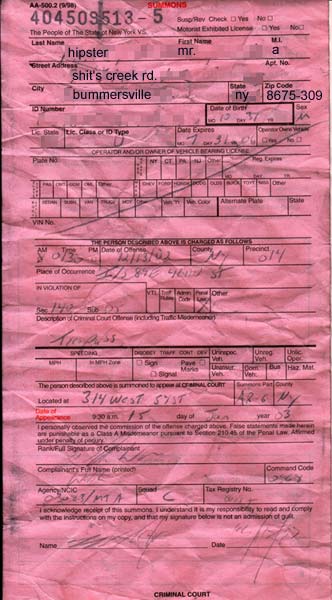 I think I’ll be very popular in prison. In fact, I’ve heard Rikers is a lovely outlet for squeamish prep school kids from Brentwood. I hope they have one of those new-fangled Internet cafes so I can continue to update Mr. Hipster from the “inside.” See you in two to four.