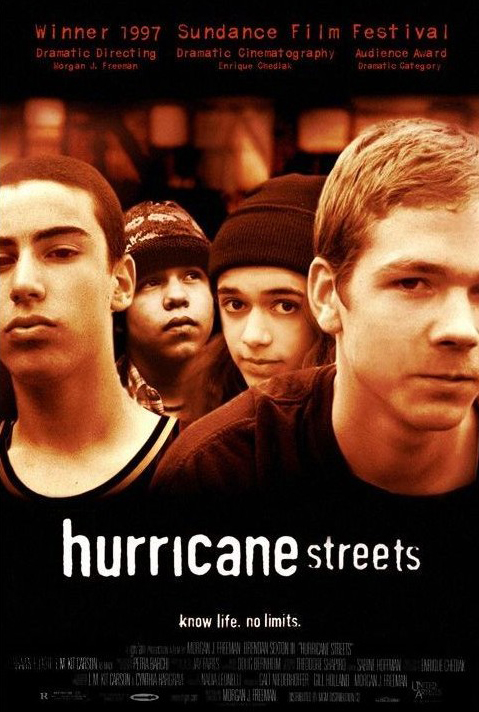 Gritty. Dramatic. And, as usual, somebody has to end up dead. Isn’t this basically the plot and outcome of every indie movie ever made? Did I mention mushmouthed kids that haven’t showered in weeks, don’t seem to have parents and seem to have very little regard for life in general? Such is the bleak setting of Hurricane Streets, a movie about a group of kids who love to skip school, shoplift and hang out in some sort of bomb shelter down by the Hudson River. Basically, the kids aren’t too bright, are undermotivated and lack any kind of drive other than stealing stuff for no apparent reason except to buy weed.

Despite all this, Brendan Sexton gives a good performance as the ringleader of the gang of screw-ups. He plays it very low-key, as his character comes to many realizations throughout the film, including the fact that his mother (Edie Falco from The Sopranos), who he thinks is getting out of jail soon to come take care of him, is, in fact, in jail for life after killing his father after he beat her. Depressing enough for you?

Basically, the kids in his crew spend the entire movie trying to convince Sexton’s character, Marcus, that they should move up from petty crime and start with the big stuff like GTA and armed burglary. Meanwhile, Marcus is busy dreaming of a life away from the city in New Mexico (where everything, of course, will be perfect) with his girlfriend (who, of course, is beaten by her violent father). If this plot sounds familiar, it should. Anybody remember Carlito’s Way? Carlito (Al Pacino) just dreams of a life in the tropics with his girlfriend after getting out of jail, while his buddies try and convince him to get involved on a big score. So, against his better judgement, he goes along with it, risking the dream and proving that nobody really changes. Like Carlito, Marcus is pinched after the cops catch him selling sneakers to grade schoolers, and is warned to go straight or face incarceration. He does go straight until his friends finally convince him to go along with a stupid idea to rob some guy’s apartment who they know stashes a bunch of cash in his drawer. Then things go bad. Surprise!

Anyway, Carlito’s Way was one of the worst films of the 90’s, so this doesn’t say much for this film. It’s not the first time this plot has reared its ugly head, and certainly not the last, but I just don’t understand how filmmakers can rehash the same crap over and over again. Speaking of writing, the dialogue in this movie is so understated and droll (so as to not make the film seem showy) it defeats the purpose and passion of the characters. Also, I just find it to be an incredible weakness in indie films these days (and some Hollywood films as well) that the conflict in the film always needs to end in gunplay. It’s like the writers aren’t smart enough to come up with something more ingenious, so they introduce guns, someone integral to the character conflict gets killed and, poof!, no more conflict — end of story.