January 6, 2003
Things don’t get much uglier than the experience I had last night. The bar I went to was filled with the scariest bunch of folks I’ve ever seen–and I’ve been to a couple bars in Canada! Seriously, there’s nothing uglier than a woman in a gut shirt dancing on top of a plywood plank covering a pool table. The thing that made this scene truly ugly was the fact that these chicks were dancing to the off-kilter karaoke warblings of other disgusting ABBA fans that stuffed themselves onto a tiny stage for all to see. (I found a picture of the place on the karaoke company’s website.) It was as if ugly exploded all over the walls.

Normally I’m not a snob about looks or ladies wearing clothes that they shouldn’t be wearing, but I was shocked by the sheer number of beasties packed into one NYC bar. It was as if a weird bus from Skokie stopped in front of the bar and dropped off its cargo onto the unsuspecting populous of Manhattan. There was also a drunken midget of a man standing in front of us intermittently staggering and farting. I think God was trying to tell us to leave.

After standing gape-mouthed (and seriously wondering when flannel came back into style), I finally realized that I was no longer hanging out on Earth. I had obviously been transferred to some awful corner of Planet Jersey where the hideous can congregate without us normal folk gawking and pointing. Did I mention that half the freaks were making out with each other? Ah, ugly spawn.

In my seven years of hanging out at the awful bars in my old UES neighborhood, I can’t collectively remember seeing as many bizarre people as I did in one night in this joint. I guess I can look on the bright side: this chick wasn’t there. 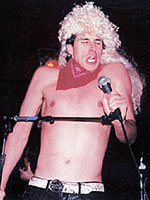 Don’t hate me because I’m beautiful.