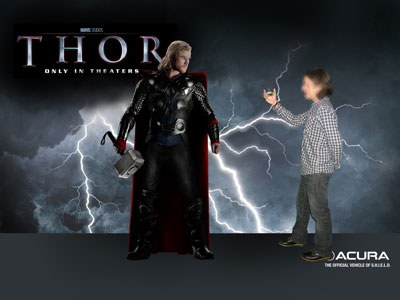 Yes, my buddy invited me to a lovely screening of the movie Thor. He being an employee not of the folks throwing the screening, Acura, but another entity tied in a roundabout way to the production, I think neither of us knew what to expect. Not from the movie of course. That was pretty evident. Lots of very loud fight scenes, not much in the way of acting (though looking at Natalie Portman and Kat Daniels for a couple hours was nice) and some completely unnecessary 3D. I mean the after party to which we were invited. Would we get an Integra in our schwag bag? Could we count the number of ping-pong balls in a jar to win our very own dealership?

Not quite. We hoofed it down from the Times Square theater to espace to join a bunch of dudes in what turned out to look pretty much like an Acura car showroom with a couple open bars and some oddball set ups. You could, for instance, watch a dude play the Thor video game in 3D in a little living room set up, get a tour of a new Acura somethingorother from a salesmodel or take a wonderful green screen photo with Thor’s image like the one above. More attractive, but ultimately way more nerdy, was the chance to win a sitting with an actual Marvel cartoonist (if that’s what the dorks call the guys who draw comic books). He would basically draw whatever Marvel character you could dream up. I didn’t get a chance, but of course I can name like Spiderman and The Hulk, though I don’t even know if the second one is a Marvel character. We did watch as some douche in a Doom t-shirt asked the guy to draw some dude who looked like maybe he was one of the bartenders at the event. But was probably like Mr. Shiz from the third book of some series that nobody has ever heard of. He was very proud of the fact he stumped those of us watching the guy draw. Mega-nerd, no doubt.

There was also this interesting CRM ploy as they tried to capture our info by offering us an I.D. for their fake CIA organization from the movie. They did totally screw up my name somehow (how do you misspell Hipster?) even though I handed them my driver’s license, but they did indeed capture some of my info, but not the peritnent stuff like email or cell number. Maybe they’ll mail me something? Did it make me want to buy an Acura? Well, after a few free Grey Gooses and a free poster, keychain and hat in the schwag bag (was hoping for an iPad or like a coupon for a six month RDX lease), I was ready to drive one on out. 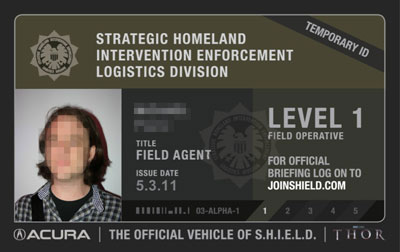