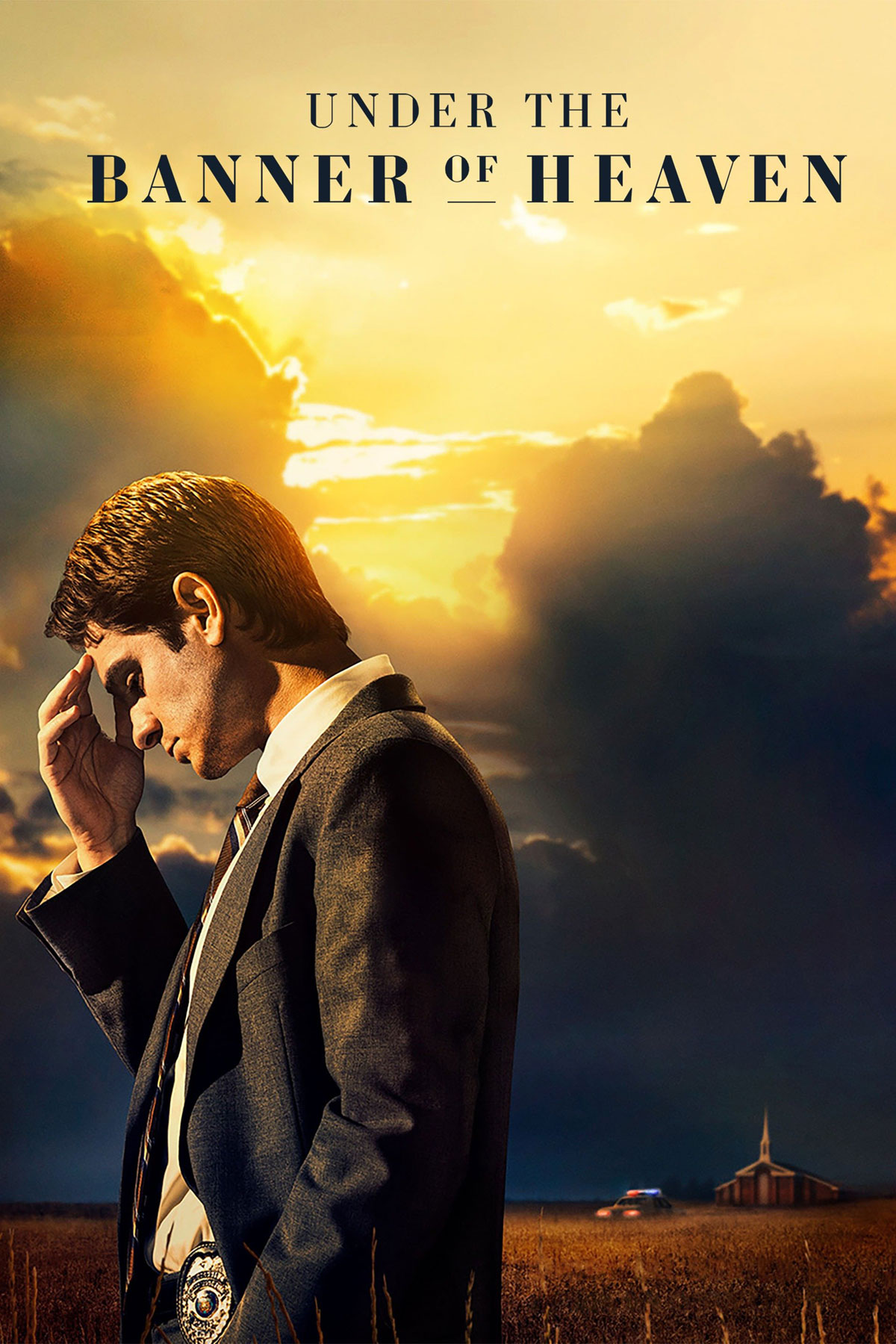 Under the Banner of Heaven

Apparently Under the Banner of Heaven was a very popular book. Like other popular books by Jon Krakauer, I didn’t read it. Because I’m just not a nonfiction guy. Despite being overly interested in weird religions like Scientology and Mormonism. Not that I’m a bigot. I mostly dislike all religions. But ones started in recent history by failed sci-fi writers and horrible polygamists really hold sway on my brain. So it was with some interest that I dove into the miniseries version of Krakauer’s novel. Because who doesn’t love a story about magic hats, fantastical underwear and religious zealots killing one another?

Again, my familiarity with the subject matter here was next to nil. Not Mormonism per se, but the specific murder and investigation among their ranks. I did know that Andrew Garfield plays the lead, and have been generally impressed with his acting in the past. In fact, I’d heard in one of my podcasts that he was good in this. And he is. The rest of the cast is rounded out by a bunch of decent second-tier actors, including a Culkin who is neither Macaulay nor Kieran. The thing was being broadcast by FX (or, FX on Hulu, I guess) who tends to put out mostly decent, high-quality content of late. So you have a popular book by a very successful author starring a charismatic actor on a network that is known as being friendly to creative creators… Seems like a win, right? Well, not so much.

Adapting a book to screen is never an easy task. At least that’s my understanding. Even with a very on-trend genre like true crime. It gets even more difficult when said TV show has to explain an entire history of a religion that most folks know little-to-nothing about in the course of telling the story of a murder investigation. And it’s here where the creators of this show kind of fell down. We mostly know that Mormonism (or LDS in modern times) was started by this dude Jospeh Smith. That’s probably the extent of most folks’ knowledge. But the series has to delve into the entirety of his journey from its beginnings in Palmyra, NY to Ohio to Illinois. Where he was killed trying to escape an angry mob. His “religion” also had to be outlined, including his do-called magic plates he won’t show to anyone that he reads through his hat via a magic stone. I shit you not. And, honestly, when laid out the way it is, it’s pretty clear that the dude went through all of this mishigas in order to be able to cheat on his present wife with impunity. I mean, it’s a real far way to go to get some strange. But that’s pretty much what it comes down to. That’s all interesting in and of itself, but these scenes of Joseph Smith are sprinkled in with the current timeline in a way that makes it feel a bit like that show Drunk History. The oldy-timey acting is hacky and the quality feels quite different than the main 1984 timeline in which the murder investigation is taking place. To add, the editing and when these pseudo-flashbacks to the 1800s drop in is disjointed and pretty janky.

The overriding issue with the series is that there is just too much information to stuff into seven hour-long episodes of television. To tell the entire history, even of a new religion, and all its machinations, while also following a relatively convoluted murder investigation, is tough. Notice above, they hadn’t even gotten to Utah yet? Yeah, that’s because Brigham Young hasn’t even taken over the troops. And, let me tell you, they should definitely not have a University named after that asshole. Whew, he’s a horrible dude. But, hey, who am I to deny Jesus’ racist, misogynistic, philandering word?Again, all seemingly so the dudes (especially Young himself) could boink a bunch of different women without recourse because God said so. Which, in modern language, we call a cult. Whatevs. Point is they use the history of the church and the religion to try to explain the divide in the current church’s thinking and kind of underpin why this murder happens. Essentially there is LDS and FLDS. The ‘F’ I think stands for Fundamentalist. Which, as we know, is never a good thing for anyone, especially when it comes to religion. Because Fundamentalists always believe in a violent, vengeful God. Which — and, look, I’m not a Christian — I believe is totally how Jesus wanted things. Oh, wait, wasn’t the dude like 98% a pacifist? Anyhow, I can see how they tried to tie things together, but there are a lot of slow stretches in the series filled with exposition that they really want you to understand, but also kind of half-ass at times. Which makes things both annoying and boring simultaneously.

So, what does this all have to do with the plot? Well, there is this family of Mormons, the Laffertys. There are five adult brothers. And somehow no sisters. They’re apparently a respected and powerful family in their Utah community. Despite the family business being chiropractors. Weird, right? Anyhow, they are led by an overbearing and cruel father who one day decides to leave the family compound and go on a special two-year LDS mission with their mother. Leaving the sons to run their bone-cracking business. Things quickly descend into chaos as a power struggle ensues and one of the brothers, Dan (Wyatt Russell), decides that paying taxes is for jerks. Which leads to federal leans on the house and business and a death spiral of weird anti-government sentiment and the entirety of the family being plunged into religious fundamentalism. And beardiness. Which is explained not so well. And is confusing with all the brothers and their wives and whatnot. But it’s interesting in a larger sense because it feels so familiar. An individual who, because of self-inflicted economic trauma, develops a hatred for the government, buys guns and retreats from society. Only to lean into religion, and in his isolation develop paranoid and over-the-top interpretations of God’s word. A word that somehow tends to veer toward eliminating obstacles through violent means and/or creating a society of like-minded individuals who will then treat that person as the mouthpiece of God. Delusions of grandeur, etc. We’ve seen it a thousand times in these cult documentaries. And this one is not much different.

Meanwhile, it’s up to Garfield’s detective character, Jeb Pyre, and his partner, Bill Taba (Gil Birmingham), to solve the case of the murdered wife of one of the brothers and her baby. Jeb is LDS and Taba is Native American. Immediately there is an interesting setup, in that LDS folks have a built-in deference to church elders and others in power in the LDS community. Knowing that this murder happened in an LDS community — most likely by an LDS member — it is in the elders’ and entirety of the church hierarchy to keep it hush-hush. There is also a weird relationship with the LDS and the Native American community. Well, weird in a super-racist and exploitive way, I suppose. But Native Americans are part of the religion from the beginning, so there is instant recognition that Taba is at odds with all of their witnesses and sources, while Pyre is in a bind in his position as a cop within a community of which he is otherwise a low-level member. Watching Garfield struggle with his belief and spiral toward a place on the brink is super-interesting. He does a really good job of inhabiting the character. His quiet demeanor balanced by inner turmoil is obvious. Taba, though, is super-awesome as he drapes sarcasm all over these people he knows think of him as a second-class human. His character would be your typical wise-cracking cop, who would seem kind of rote in any other situation. But his cigarette smoking and cuss-filled jokes are like the fart in the room every time he’s around folks who consider caffeine the devil’s whatever. The trolling is excellent. He’s funny and charismatic and just a delight.

Ultimately, though, the whole series suffers from information overload. There are historical downloads. And complicated familial downloads. And names of a lot of white dudes, who all grow beards and are sometimes just indistinguishable from one another. At times the show felt too much like homework. Complete with bad historical recreations that felt apart from the main narrative both production and plot-wise. It got kind of dry at times, and verging on boring in others. Some of the actors had not a whole lot to do, so they had to amp it up when on screen. And others, like Garfield, were asked to do a lot of heavy lifting in terms of keeping the narrative afloat with complicated exposition, as well as being the emotional center of a series chock full of detail. He did great. But it made a lot of what was going on around him feel somehow both rushed and like a slog at the same time. Anyhow, if you have a deep interest in LDS, this might be one you could check out. But if you’re like Ms. Hipster or myself, it may test your patience at times. Anything to avoid having to read a 400-page book, I guess.