It’s nice to see that the blog juggernaut, Gawker, has finally vindicated twelve years of tall tales about the man who was nice enough to give me my first job in Manhattan, Mr. Scott Rudin, by naming him “New York’s Worst Boss.” 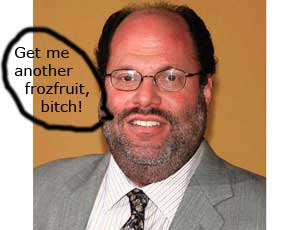 The sad thing is that my stories of eighteen hour days, rapid weight-loss and oft-thrown projectiles are all true. Not only did I go from about 150lbs. to about 120lbs. in a matter of a few months (due to Rudin deeming our food “disgusting” and making us throw out anything we dared to have delivered the office) but was branded with the fun moniker “California surfer shithead” (despite never having surfed in my life). The stories are soooo endless that I don’t have the stamina to write them all down here. Plus, I want to save them up for my book and make back some of the money I lost out on when that same boss cut my salary in half for no apparent reason–and without telling me. Eventually his first assistant gave me the explanation I was looking for: “There are a million dudes just like you who would work here for free [so just be glad you can get paid to be tortured, belittled, intimidated and essentially broken down and debased to the point where you are a mere shell of a human being.]”

Top 5 random Rudin quotes
[not verbatim in most cases, but pretty close]:

1. “Why doesn’t that bitch just fuckin’ die already?!” – After slamming the phone down on his mother mid-call, and then tearing the phone cord from the wall

2. “This… is not a fuckin’ granita” – After, in the days before the Internet, demanding a “granita,” but refusing to tell me what that might be, and then throwing away my first two attempts. Finally, after running around for three hours in 95-degree weather, he was satisfied with my purchase, took one sip and threw it in the garbage and told me to “get the fuck back to work.” To this day I dont even think he knew what a granita was.

3. “Your fat, old c-nt of a client wouldn’t even have a job if it weren’t for me, so shut the fuck up” – Speaking to what I believe was Kathleen Turner’s agent during her run in his B’way play, Indiscretions

4. “Someone needs to find out what kind of fuck would want to do this to me!” – After finding out, yet again, that someone had broken in and vandalized his CPW apartment that was in the midst of being renovated while he lived at the St. Regis. He had, of course, fired several contractors (who all had keyes) and workmen without paying them, so you do the math, Captain obvious…

5. “I never want to see that California surfer shithead ever again!” – To his first assistant on the phone after I shoved my pager in his face in the now demolished New York Coliseum building after being paged five times (and having to jump out of my cab every time to find a working pay phone) to the wrong number and then being screamed at for not calling him to report my progress uptown with the Marvin’s Room script.

Bonus* “This place looks like a goddamn meeting at The Advocate. I need to get a woman in here!” – After looking around his office at the four very young, male assistants sitting at their desks. I was actually replaced in that office after I left by a young woman, who lasted exactly one week in the position before storming out. Rudin was reported to then say, “Well, that fuckin’ experiment is over.”