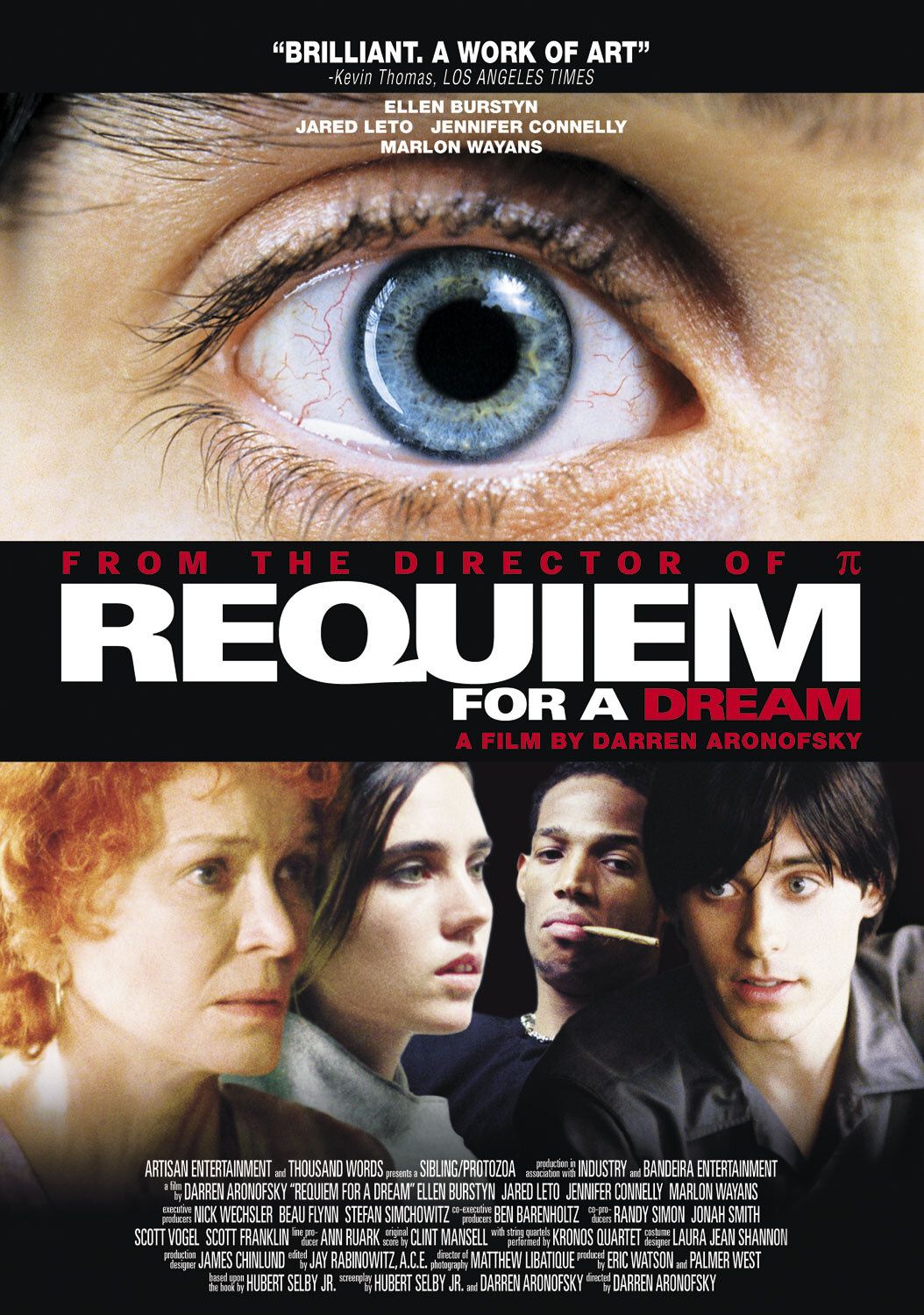 Requiem for a Dream

Oh my god this movie is nuts. I mean, I’ve seen tons of movies about drug addiction, but they all seem to have this Hollywood sheen about them. We care about the main character who inevitably kicks his habit and ends up okay — albeit in a much more sedate, boring lifestyle. Even if they don’t end up okay, we’re usually left with some sort of hope. Requiem for a Dream leaves us with none of that. The movie ends and you just want to go bury your head in your pillow and scream (a la the very cool Jennifer Connelly screaming into the bathtub scene).

Let me just stop for a moment and say that it must take a very special movie for me to give anything in which Marlon Wayans appears over two stars. Anyhow, the whole message behind this movie is very bleak. We have four characters all trying to better their lives in some way. They have dreams. Mind you, these aren’t huge dreams. Sara Goldfarb (Ellen Burstyn) wants to appear on a TV talk/game show that she watches incessantly. In order to do this, she feels she needs to lose a bunch of weight to fit into her special red dress. This leads her to a doctor that prescribes a combination of diet pills, uppers, downers, and some other pills. Her son, Harry (Jared Leto), and friend, Tyrone (Wayans), just want to make enough money dealing drugs that they can live and support their growing habits. Harry’s girlfriend, Marion (Connelly), has dreams of a life with Harry. Basically Aronofsky equates drug addiction with the addiction to fulfill one’s dreams. Damn, that’s really a “glass is half empty” kind of outlook. It’s almost as if he’s saying that we shouldn’t follow our dreams, because we will become addicted to the pursuit, and will ultimately end up ruined. Definitely something to think about.

So the movie follows these four characters as their lives spiral out of control. Sara Goldfarb becomes completely addicted to the diet pills she is taking, to the point where she is calling her doctor to cop more pills because she is doubling and tripling her dose in order to feel the euphoric effects of the uppers. She is also slowly going mad from malnutrition, lack of sleep, and general drug abuse — as she imagines her fridge coming after her, her favorite TV show host, Tappy Tibbons, appearing in her living room and a whole host of other delusions. Harry and Tyrone also become more and more desperate as the drug flow slows down, their money dries up, and a turf war breaks out in their Coney Island neighborhood between the dealers and the mob. Meanwhile, Marion slips further and further into addiction, and her relationship with Harry begins to break down. She ends up doing just about anything to get drugs (you’ll see).

While this story sounds pretty typical of your heroine addiction movie, the thing that makes it different is the amazing style in which it is filmed. There are some of the most disturbing scenes I’ve ever seen in a film. There’s this creepy feeling that pervades every frame, with many of the scenes lit only by flickering, fluorescent lighting — casting a sallow sheen to everything. Aronofsky uses everything in his film school bag to move the film along, including jump cuts, split screens, fast and slow motion, and all sorts of bizarro close-ups. Usually this would detract from a film, taking the focus off performances and distracting the audience with camera tricks. This is certainly not the case in this film, as Ellen Burstyn gives one of the most disturbing, amazing performances I’ve ever seen. She manages — through the use of a couple fat suits, bad hair styles and creepy make up — to take her Brooklyn grandmotherly character from robust and sunny to a drug addled, anorexic paranoid freak. She delivers a monologue about being old and lonely (all while flying on uppers) to her son at one point that should have snagged the Oscar for her right there. Her performance made Julia Roberts’ acting look like Amy Smart in Road Trip. Burstyn was robbed.

Jared Leto doesn’t have a whole ton of range as an actor (he cocks his head, stares and stands around looking pretty) but does a decent job as the low-key Harry. Marlon Wayans actually does an okay job. Jennifer Connolly is surprisingly good in her role, considering the last thing I saw her in was that wonderful “help me, I’m stuck in Target overnight” comedy, Career Opportunities. Of course I know she’s been in things since, but I still have trouble separating her from her early work as a teen dream in those after-school specials. This movie is not for the weak of stomach, or the person that needs their morality tales to be wrapped up in a neat little, happy package, but if you want to see something that will leave its mark on your brain for a couple weeks or months, go rent it. Warning: may cause some seriously f’d up dreams…