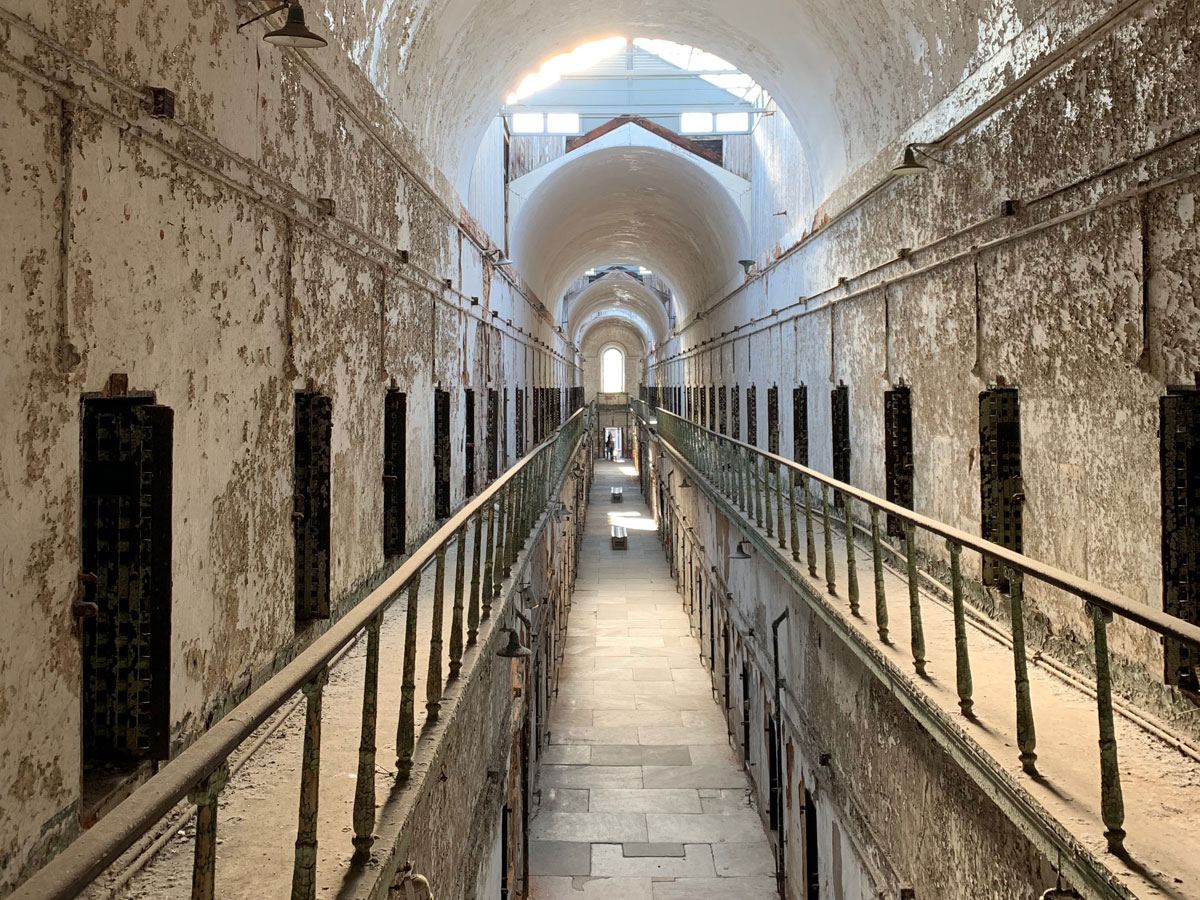 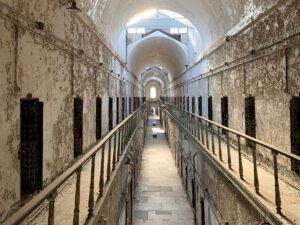 Philadelphia is known for all sorts of things. You have some stuff about the Declaration of Independence and a famous sandwich that involves cheese and steak and even a perennially underperforming basketball team. But did you know it’s also home to the world’s first true penitentiary? And that this penitentiary, Eastern State Penitentiary, is a national historic landmark? Well, it can’t all be cheese whiz, Phanatics and whatever the hell that Gritty thing is, can it?

When planning to visit a couple friends who bought a house in the Kensington neighborhood of Philly (after moving from the grossly-named, Fishtown), we looked at landmarks and whatnot that we hadn’t visited in one of our other trips to the city of of brotherly love. After all, there’s only so many joints that were once filled with wigged-out, old white guys one can see before they all start looking the same. So, to prison we went! 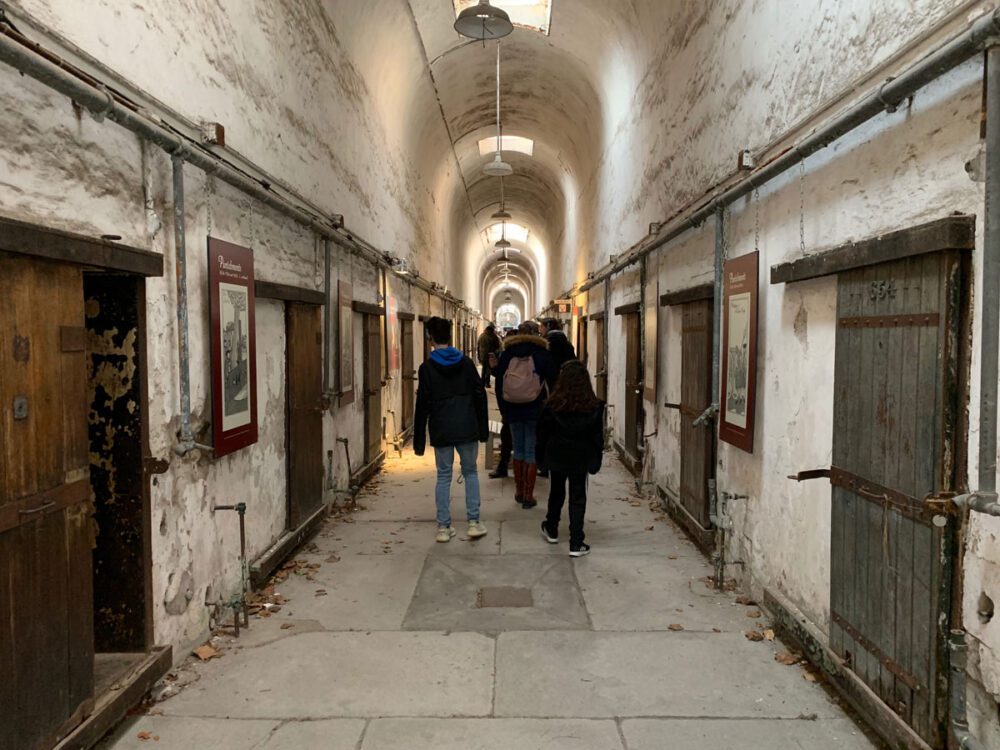 A word of warning: do not come here when it’s really cold out. Old edifices are not built with a lot of insulation, and this joint is cold as fuck. No, seriously. It’s like walking into a stone meat locker that is both cold to the touch and breezy at the same time. It traps the chill and intensifies it in a way only a place meant to house the wicked can. So, that aside, it’s a lovely place! Okay, it’s totally not. And this level of cold — and what you can only assume is the intense level of heat on a really hot day – must have been super-fun for those prisoners. The tour guide mentioned that there was “heat” back in the day, which basically meant hot water pipes flowing under the floor. And they even had indoor toilets! Which, apparently, was more than the White House had back in the day. But, whatever the case, the cells these folks had to live in (and they had both men and women housed here) could not have been pleasant in the dead of summer or the deep freeze of winter. There was no window in which to put an air conditioner. And, for the first hundred years or so, no electricity, even. And it’s not like you’re gonna give prisoners candles or fire of any sort. So, when the sun went down, there you were in the pitch black. 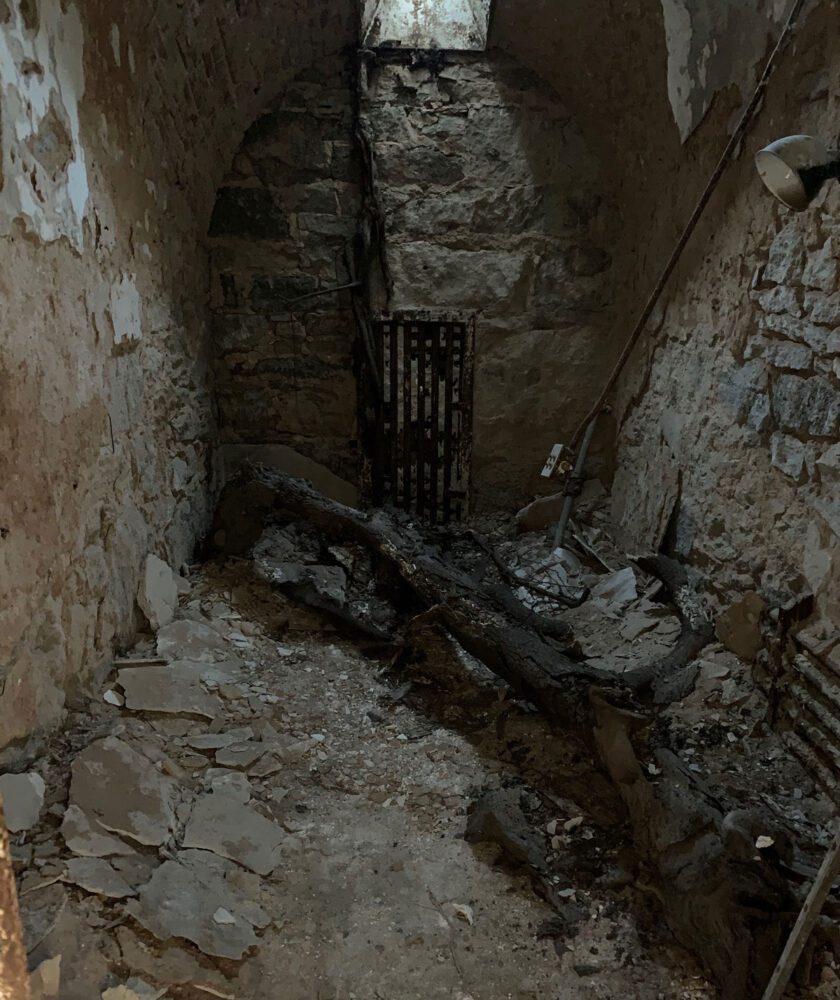 I kind of buried the lead, though. Steve Buscemi was there! Okay, his voice was there. When you walk in, the oddly pleasant docents hand you a lanyard with a device on the end of it and a pair of headphones for what turns out to be an audio guided tour. And that tour is Buscemi telling where to walk and what to look at and what’s what. It’s pretty cool. That kind of leads you around to certain sections of the prison, eventually leaving you outside in a yard where you see a large installation outlining how many more people we put in prison than any other industrialized country and what amounts to a pretty good argument for prison reform in the US. How very radical.

The rest of the grounds can be toured on your own, or there are scheduled guided tours of certain sections of the prison, including the medical wing, which you can see in the first big photo up top on this page. All in all, it’s a fascinating place, though Hipster Jr. kind of wanted to see a ghost or two. Apparently they do one of those live haunted house things here every Halloween called Terror Behind the Walls, which is a very popular event in Philly. You couldn’t make me come here at night for lots of money, and I don’t like dudes in masks jumping out at me in any venue, let alone a crumbling prison where people most definitely died — although mostly of TB and not murder. Though I’m sure there was plenty of that as well.

I honestly wish it hadn’t been so damn cold, or we would have stayed longer and I would have taken my hands out of my pockets to take more photos, but what we did see in this castle-like structure in the middle of a modern city was definitely worth the trip. And, again, I found it super-funny that the folks who worked here were beyond nice. Philly almost treats its “brotherly love” nickname or motto like an ironic joke, but the employees of this particular institution seemed to take it to heart and engage the paying public like, well, the paying public. The penitentiary stopped being a working prison back in 1971 and was locked up for twenty years, falling into some disrepair and being vandalized by the aforementioned typical Philly crowd, until some renovations started in 1991 and it opened back up to the public in 1994. One of our guides was actually a retired prison guard from another prison who was beyond excited to be showing us stuff and answering Ms. Hipster’s many enthusiastic questions.

Even more than the actual structure and the sight of a modern ruin a short Uber ride from a friend’s house, this prison was at the forefront of the modern prison movement in the US back in the early 1800s and was the global model for quite a long time. A model that thought strict solitary confinement — including absolute silence and solemn penitence — was the answer to rehabilitation. Whether you stole a horse or murdered a dude. What we’d definitely see as cruel and unusual they saw as just. And it lead the way for quite some time. Turns out it’s super-pricey to house prisoners this way, however, and not at all reasonable in most cases. So they learned not through humanity, but through practicality that maybe leaving criminals alone with their thoughts 24 hours a day isn’t necessarily the way to salvation. Who knew?