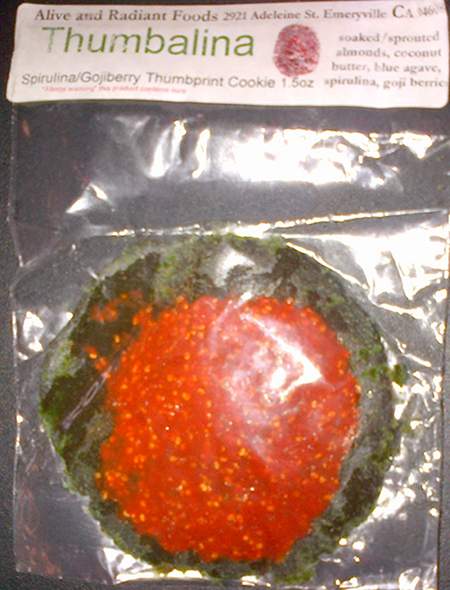 There are two simple things we ask of our food. Be nice looking and be nice tasting. Now, in many instances I can think of I’ve had beautiful food that wasn’t all that tasty. Less often, but still somewhat acceptable, is ugly looking food that tastes damn good. The first instance usually happens with fancy deserts. The second with Mexican food. And then there are times when the food in question is both ugly and too nasty for words. Even something as innocuous and supposedly joyful as a cookie. And so I introduce you to the world’s worst cookie. Hell, the world’s most disappointing all around bastardization of a childhood snack. Look upon it if you will:

What appears to be a St. Patrick’s Day died cookie is in fact made of the hippy’s favorite living organism, spirulina. I’ve never tasted spirulina, but I imagine it tastes like the underside of Sigmund the Seamonster’s fish balls. And that topping? I know it looks like a lovely marinara (which would be disgusting in and of itself), but it is in fact gojiberry. I think that shit is just plain made up. The fact this thing could probably crawl on its own is reason enough not to eat it, but the thought of putting something purporting to be a cookie into my mouth that looks like a tomato sauce covered pile of seaweed is enough to bring bile flowing. We couldn’t even get one of the hardcore vegans in our office to taste it! And they’ll eat anything that isn’t nailed down and never had sense enough to try to escape slaughter.

If for some reason you want to play a trick on someone or make somone eat something on a dare, you too can order one of these things from the stinky hacky sack crew at Alive and Radiant Foods. 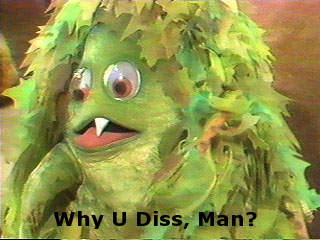