I understand that there’s this new influx of men’s magazines out there. I used to subscribe to FHM, but let it lapse after I realized it was meant for dudes who were still going on spring break and doing bonghits in their dorm rooms. Even if this wasn’t the case, it was embarrassing carrying that glossy mag with the half-naked woman on the cover into the elevator of my building that’s filled with doctors and lawyers and French people. I could almost feel the brain cells popping as I read yet another article about how to get the wet look in the age of the dry look. Besides, the only interesting parts of the magazine could be found on their Web site.

Prior to this I had a subscription to Details. My subscription ran out right before they left on hiatus to “overhaul” their direction. It seems this plan involved filling the pages with lots of men’s underwear ads, articles about toning your glutes and interviews with Bruce Weber about his titillating all-male wrestling Abercrombie campaign. Sorry, not in my interest pool.

So this leads me to my subscription to Esquire. I remember this magazine sitting by the toilet in my house growing up. Every book I read claims that it was originally published in part in this magazine. The covers are sure not to embarrass me in public, and the articles tend to have some sort of journalistic or artistic slant. Overall I was very happy with the magazine’s content, and found the $9 for a year’s worth more than satisfactory.

I remember being about twelve and ordering my first Sports Illustrated subscription. I’m not sure if I was more excited to get the magazine or the free football phone. And this wasn’t one of those punk football phones that folded in half and lay on your desk like a dead trout. Nope this was the real thing, complete with pulse/tone switch and life-sized laces. Remember? (Mine was a Raider phone, not a Jets phone.)

It’s not as if I expected anything too fancy from the folks atEsquire. After all, I realize that this is a monthly mag that charges a whopping $9 for a year’s subscription. I don’t remember how much a year of S.I. cost in 1984, but I’m sure it was quite a bit more. I didn’t expect anything as cool as the football phone, or even the horrendous digital logo watch with the fake button that does nothing other than provide one more hole through which water can invade. In fact, I completely forgot about the free gift until a plain manila envelope showed up with a crooked label affixed to it. I furrowed my brow, listened for ticking, opened it, and found this: 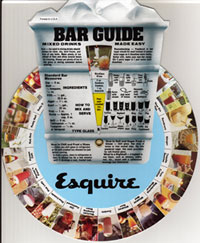 A friggin’ paper thing with a copper brad through the middle of it. I think I may have made this exact thing in fourth grade to show the whole ROY G BIV phenomenon. It’s literally a piece of thick paper with a bunch of outdated drinks printed on it. The thing rotates awkwardly to show you the ingredients in classic concoctions like a Brandy Alexander and Dubonnet Cocktail. Awesome! I can’t wait to show off my bartending skills to all my friends. It’s not as if I don’t have a perfectly useful bartending guide sitting on my shelf in case I need to figure out how to make a Gin ‘n Tonic. Seriously, you’d think a classy mag would know better.

Oh well, maybe I’ll wear it around my neck like a medallion so the next clueless bartender I run into can get an eyeful of my cardboard friend and the secret to making a good Harvey Wallbanger.