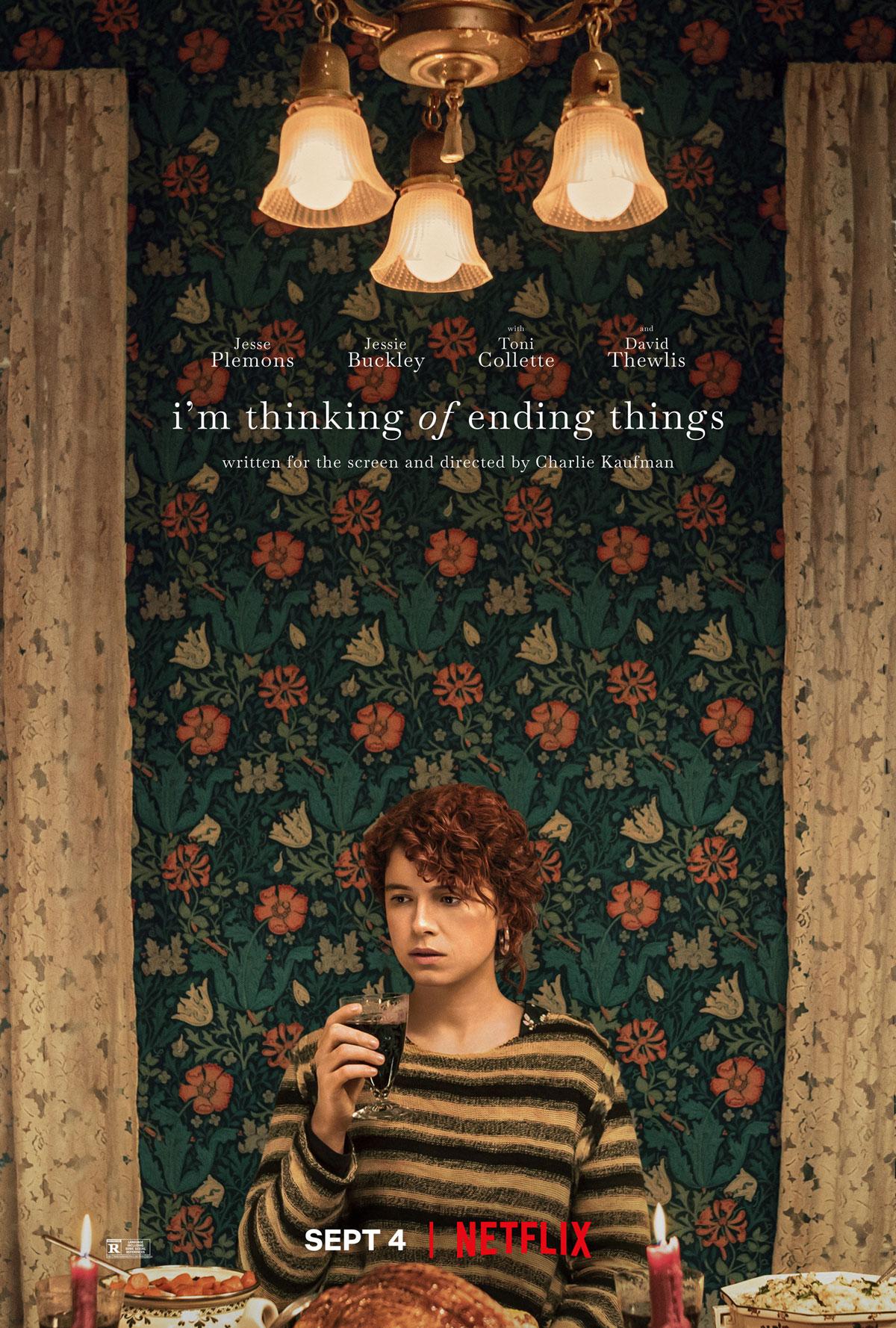 You know going into a Charlie Kaufman movie that you’re not in for a conventional time. You can take all that formulaic shit and throw it right out the window. Not as weird (or European) as a Yorgos Lanthimos film, but more insular and more oddball and than anything from Paul Thomas Anderson, Kaufman explores the world of the mind and the way it can shatter into surreal pieces. I’m Thinking of Ending Things is no exception, and definitely feels like it happens in the same sad universe as Eternal Sunshine of the Spotless Mind, Synecdoche, New York, Anomalisa, Adaptation and even Being John Malkovich.

So, what do all of these movies have in common? Regret. That is thematically what all of his movies seem to be about. And this one is pretty much the pinnacle of Kaufman’s regret oeuvre. It’s a film about a man named Jake (Jesse Plemons). And a woman seemingly named Lucy (Jessie Buckley). Lucy narrates in voiceover as they drive through the snowy countryside on their way to a dinner with Jake’s parents on their farm. All the while Lucy repeats the sentence, “I’m Thinking of Ending Things,” as she stares out the window into the rising storm. The assumption here is that she’s referring to ending her seven-week relationship with Jake. And that this whole trip is just kind of a fait accompli. But I’m too stupid to even think of that and just assumed from minute one that she was talking about killing herself. Because, after all, this is a Charlie Kaufman movie and you always just kind of have to go to the saddest, most depressing interpretation of things. Seems my initial thought was closer to the truth. Sort of.

After driving and talking and reciting some really dark poetry, they arrive at the farm only to have Jake tell a really disturbing story about a maggoty pig. Things are off to a surreal start. And then we meet the parents. Unnamed mother (Toni Collette) and unnamed father (David Thewlis) seem to both exist and not exist at the same time. They are both creepy and standoffish, but also somehow overbearing. Lucy’s profession seems to change with every conversation. At once she’s an artist, studying theoretical physics and a waitress. The story of how they met changes. And Jake continually looks uncomfortable and several times loses his shit. And then time becomes unstuck. As is Kaufman’s wont. We see the parents in different stages of their lives. Young mother, old father. Old mother, younger father. Different stages of dementia and the slow unraveling of reality. It’s very disorienting, but clearly this is not what it originally seemed to be.

All the while we see intercut scenes of an old high school janitor going about his day. There are hints that Jake and this janitor are obviously connected and that time and reality are fluid. When Jake and Lucy finally leave the farm and have deep and uncomfortable conversations about everything from the song “Baby It’s Cold Outside” to the movie A Woman Under the Influence, Jake eventually pushes the action toward — you guessed it — a high school. That’s where everything kind of shatters and there’s interpretive dance and the coming together of the worlds of Jake’s mind and his stark reality.

What’s most surprising about the narrative is that Kaufman tips his hand so early in the movie. He basically unwinds the “twist” over the span of the two hours, but lets you know pretty early on what’s going on. Lucy — whom it seems is the main character here — is clearly not the main character. Despite being the one on the poster and the narrator. She is the regret. More pointedly, she is Jake’s regret.

This is a weird one. It’s cerebral, even compared to other cerebral Kaufman films. There are long swaths when Plemons and Buckley are in a dark car having in-depth conversations about poetry and films. And the aforementioned long scene that involves interpretive dance in the hallways of a high school. It’s pretentious, to be sure. But it’s also haunting and sad and filled with the quintessential Kaufman dread. I classified it as psychological horror because I’m not sure what else to call it. It’s certainly psychological. And there is horror. But not the typical ghost or monster type of horror. It’s the horror of being stuck in a life you didn’t imagine for yourself. The horror of regretting the good deeds you did in sacrifice of the life you believe you could have had. It’s almost a film that demands a second viewing once you kind of decode and process the framework of the characters’ psyche in order to catch the nuance and enjoy the really great performances from all involved.