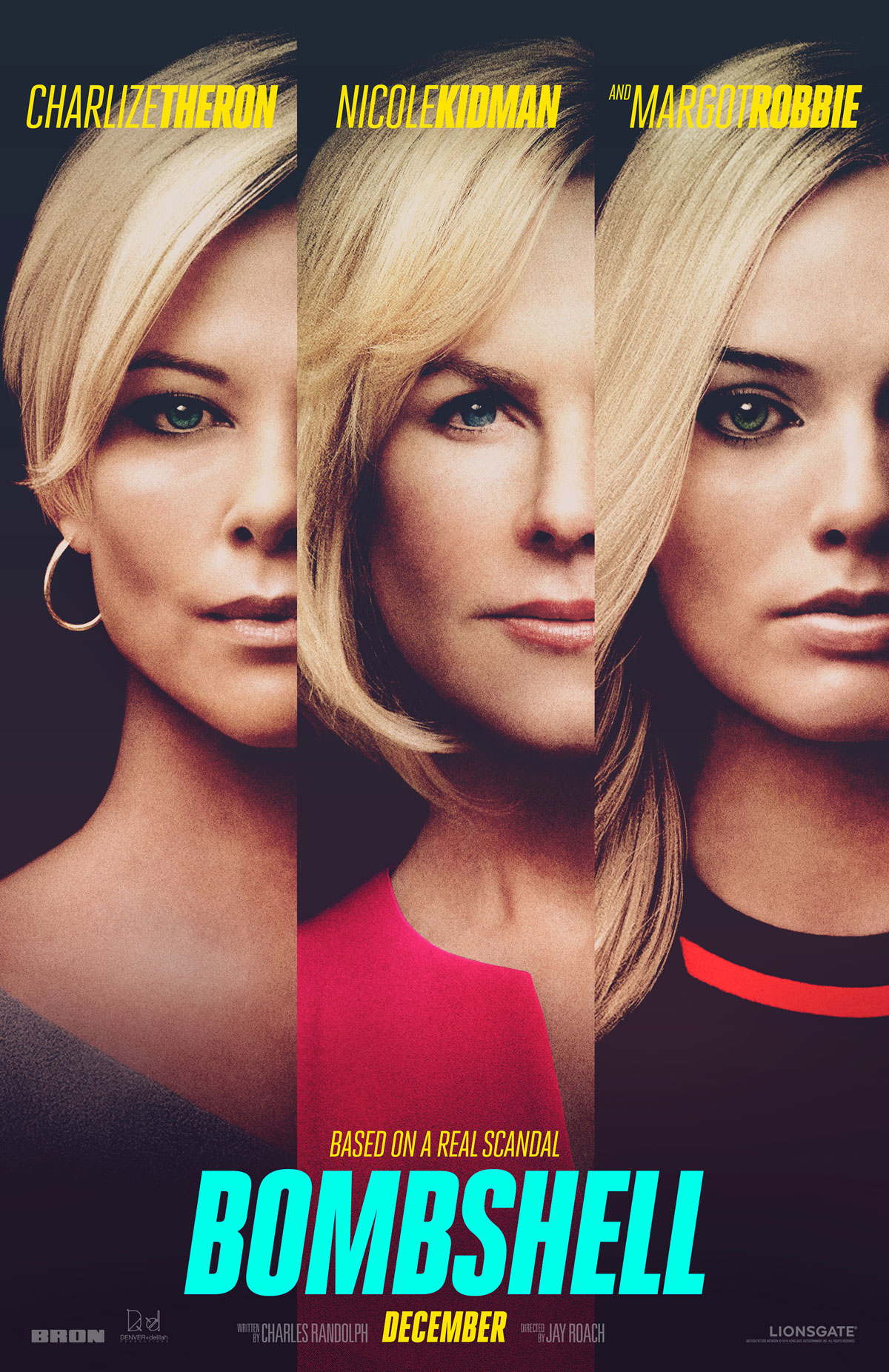 And, yes I totally agree that nobody, man or woman, should be punished for ambition. And absolutely nobody should be put in the position that these real or fake women were put in. Roger Ailes was the fucking devil and I hope he’s enjoying a good ass-roasting in his new home. But, I don’t know, the whole thing is just distasteful to me. Horrible people being sexually harassed by even more horrible people. Who wants that?

So, let’s name names. You have your Megyn Kelly (Charlize Theron). And then you have your Gretchen Carlson (Nicole Kidman). And, thirdly, you have your “composite” character, Kayla Pospisil (Margot Robbie). The makeup jobs are remarkably good. The performances are fine, though guarded. Because, again, it almost feels like Theron and Kidman are holding back because even they are afraid to make these two women too relatable or sympathetic. As is director, Jay Roach. The only character who seems to get her due is Robbie’s Kayla, because she is kind of the stand-in for all young women in a predatory industry that preys on beautiful, young ambitious women. Exactly what Kelly and Carlson were a decade or two earlier.

John Lithgow as the fat crypt keeper, Roger Ailes, is creepy enough, but almost plunges into caricature. You can see and hear him through the fat suit and it’s hard to imagine the mild-mannered Lithgow as this dude who, by the time we join him in 2016-ish, is a decrepit old man. But — and this is where I started to question some of the whatever of the film — is still gaming the system for sexual favors? And, yes, we know that Kelly and Carlson allege sexual harassment and abuse, which happened when Ailes was a more spry dude in the 80s, but are we to believe that this harassment and abuse was still going on with newbies well into the two thousand and teens? That is what’s portrayed here. That he has a line of young, blonde woman traipsing into this office to, uh, service him. I may be mistaken, but I don’t think that’s what went down.

Anyhow, this is the main problem with biopics. You have to collapse timelines, create composites and illustrate bad behavior in a way that makes it seem like that’s all that happened. Because when Ailes wasn’t telling women to wear shorter skirts, inventing the see-through desk and threatening women’s jobs unless they gave him a hummer, he was also busy ruining this country. Both things are bad. Both things are deserving of being outed. But the bombshell here is that this horrible man and his horrible work place were demeaning, subjugating and abusing women? That hardly seems like a bombshell considering the slow and evil undermining of the American trust and way of life that he and Fox News were perpetrating on the public each and every day. It would have been a bombshell if the organization turned out to be respectful and supportive of women. Seriously, how could this be a surprise to anyone?

Anyway, I’ll get off my soapbox. And, yes, it’s a horrible thing that this man and others (asshat Bill O’Reilly among them) did to these women. But in creating this toxic environment and this culture of awfulness, it was pretty fucking satisfying to watch them fall. But, like any evil endeavor, just because they’re gone doesn’t mean the evil goes away. They just promote the next general. And the next one. To spread their culture out to the weak and unsuspecting minds who take each and every word as gospel. So, I guess what I’m saying is that I wanted more fire here. I wanted more anger. I wanted to see this human effluence suffer and for us to dance on their graves. Instead we got this kind of in-between thing where these people are painted as malevolent clowns and not the purveyors of doom that they are. And, sure, the film is kind of put out there as a pseudo comedy with its wacky titles, quick edits and snappy dialog, but there is absolutely nothing funny about any of this shit.