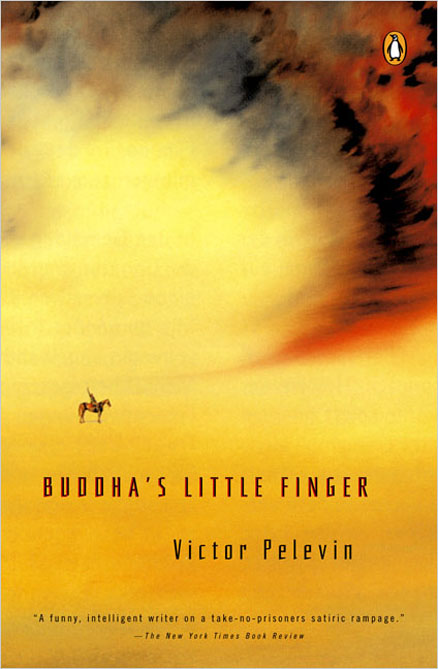 Wow. Yikes. Um. I have completely reached the limit of my reading comprehension. Remember those ERB things you used to read in elementary school (maybe they were called something else in your state) that were essentially torturous versions of the SAT reading comprehension section? They came in different color folders; pink being the easiest and like the back of the box was dark purple and used ten dollar words and triple negatives in the questions–which, of course, makes no sense when it’s the reading that’s supposed to become more challenging, not the questioning. Point being that if this book had a folder color, it would be the deepest, most bruising shade of black. It’s not even that the Russian-English translator choose big, confusing words so much as the concept of the Russian revolution and the delusions of it in the context of modern-day Russia as an allegory of Buddhism is beyond me on so many levels. It’s as though I took not a single history class. Am I the only one who only remembers learning about slash and burn agriculture and the feudal system and that’s about it? The fact there was even a revolution in Russia only sounds familiar because I seemed to recall a Woody Allen film called Love and Death that may or may not have had anything to do with it. In which he wore a funny hat and talked to a couple guys who looked vaguely like Yakov Smirnoff. And to even imagine I took and Eastern religions class… Granted I’m not a total idiot, but the thing kept slithering from between my fingers. The book started of relatively innocuously with a mysterious murder and identity theft and cocaine and shooting and armored cars and shit and then it just gets wacky, what with giant Arnold Schwarzenegger’s and delusional, Nietzsche-spouting commanders and this dual past/present world in which our main character Pyotr Void seems to slip between at the drop of an eyelid. Every character also seems to have names and aliases and nicknames and an unnatural love for revolutionary poetry. Don’t get me wrong, the little I could glean from the text was pretty cool, but like most Buddhist garbage about “there is no spoon” I hear, it drives me more mad than calms me down. There IS a spoon, dammit, and I’ll smack the shit out of you with it! Perhaps this thing is best read with the Russian Buddhist’s companion open next to it, but I’ll never know. Chalk it up to another one I can shake my head at and wonder how and why I manage to do this to myself time and time again.