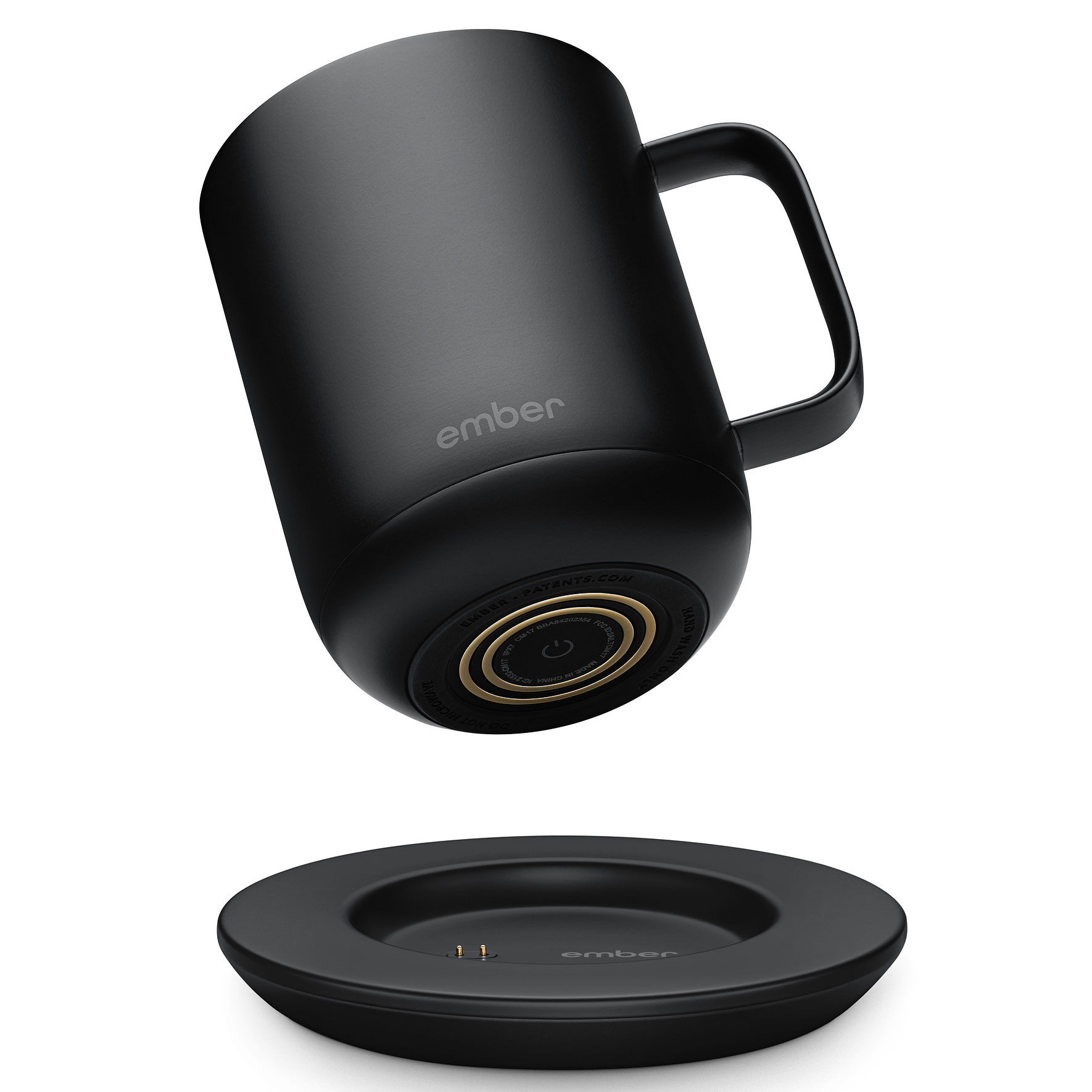 What kind of bougie fucker am I that I need a $100 “smart” mug? The kind that’s gifted it by a vendor and can’t possibly look a gift horse in the mouth. After all, I hate cold coffee as much as the next guy. And I’m also incredibly forgetful when it comes to actually drinking my morning brew. I’ll leave my full mug places. Or I’ll get working on something and just space it. So a container that maintains that temperature for my dumb ass actually seems like a useful product. Even if it’s a hundred smackers.

First, let’s look at what the Ember Mug² is (called this because it’s the second version of said mug). It’s a 10-ounce ceramic coffee cup. The aesthetic is modern and incredibly plain. Austere, even. The handle is just a little too angular to be super-comfortable in your hand, but the weight of it is actually pretty satisfying. The ceramic is a matte finish, which makes it look like one of those extra-fancy Maseratis. Pretty sweet. It’s not going to be your old-fashioned cat mug that you stole from your mom’s house. Or like that chunky insulated plastic Rangers thing that holds 40 ounces and looks more like the Stanley Cup than something that holds coffee. It’s sleek and understated, just like good tech should be.

Yes, I called it tech. Because, well, it’s a mug with a battery and some sort of fancy wi-fi in it. And like all connected devices these days, there’s also an app that controls it. Ember was cute and made the coaster on which the mug sits the charger. So I suppose you could theoretically keep your mug on the coaster while you were drinking and never run out of juice. The only caveat, of course, is that you’d have to place it somewhere where it could remain plugged in. I suppose I could rig that on my desk, but, like I said, I tend to wander with my coffee and leave it on the kitchen counter, on the bathroom sink, in our closet. Anywhere where it remains misplaced while my brew grows ice cold. For shame, I am a terrible coffee drinker. So, without the coaster plugged in, I usually get around one to two cups worth of coffee heated by the Ember. Which I suppose is fine, and in some regard makes me more aware of the fact I need to drink that shiz before its temp drops. Or it just makes me more lazy…

The app does nothing really other than to tell you what temperature your coffee is and allow you to set what temperature you’d like to keep it at. As long as the mug holds a charge or it’s on the base, of course. I imagine it’s for liability reasons, but the top temp you’re allowed to set the coffee doesn’t seem particularly high. I’m pretty sure I have close-to-the-surface nerve endings, so I have trouble holding or drinking anything too hot, but even Ember’s top temp isn’t overly hot for me. So I imagine there are some out there who love their liquid more on the scalding side and will be disappointed by the cap on the top end of the heat index with this thing. Frankly, it’s probably fine for most, though. So I’m not really certain why people would jack with the app much at all, as turning down the top-end temp doesn’t really seem necessary. Unless you’re some sort of frail granny who likes her Earl Gray room temp. Of course, an old granny wouldn’t be caught dead drinking out of this hipster coffee cup any more than I would drink out of one of those flowery porcelain things with the tiny looped handle.

I think Ember promises about 90 minutes out of a charge. I use just about every minute of that every time. It essentially gets me through two cups. Which is probably more than enough. But I always crave more. Maybe I really will move the saucer/charger over to my desk and try out keeping it charging. I’m not totally convinced that’ll work, but it’s worth a try. Anyway, I’m also not sure anyone needs a $100 coffee mug. But there is something satisfying about adding tech to an otherwise analog activity. Or maybe all of our brains have just been rewired to the point where this all sounds like a good idea.