The Decemberists @ The Wellmont Theatre 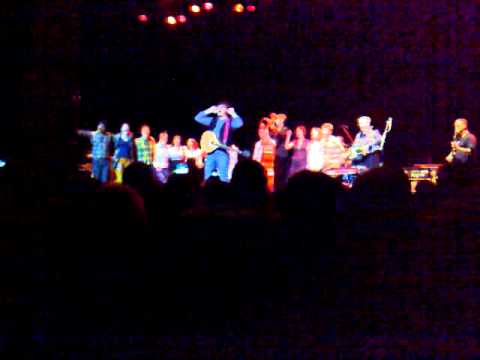 We walked the eighth of a mile or so from our house down to The Wellmont Theatre in Montclair to see The Decemberists, and could hardly believe how they turned the former shithole of a movie theater that once stood there into a terrific, modern concert venue. And I stood there proudly, secure in the fact that I too had what those hipster kids in Brooklyn had: a legit joint to watch bands play at high volume while drinking seven-dollar beers. Wooohooo! Granted, I don’t think Steely Dan is playing Williamsburg any time soon.

Clearly The Decemberists (who shilled for Obama at some point in the campaign) knew their audience. After all, I believe 89% of Montclair residents voted for Obama, and the other 11% voted for idiots like that smug shit, Ralph Nader, and a smattering of Green and Commie party nobodies. They mentioned the outgoing administration several times, and sang with passion in a new-ish song about Valerie Plame. It was a good time, despite the spastic, swaying Euro guy in front of me, and my fixation on lead singer Colin Meloy and his uncanny resemblance to Dwight Schrute. Here’s the final couple minutes of the show shot on my cell phone. The guy singing way off key to the hippy bs going on is in no way me–so ignore him.