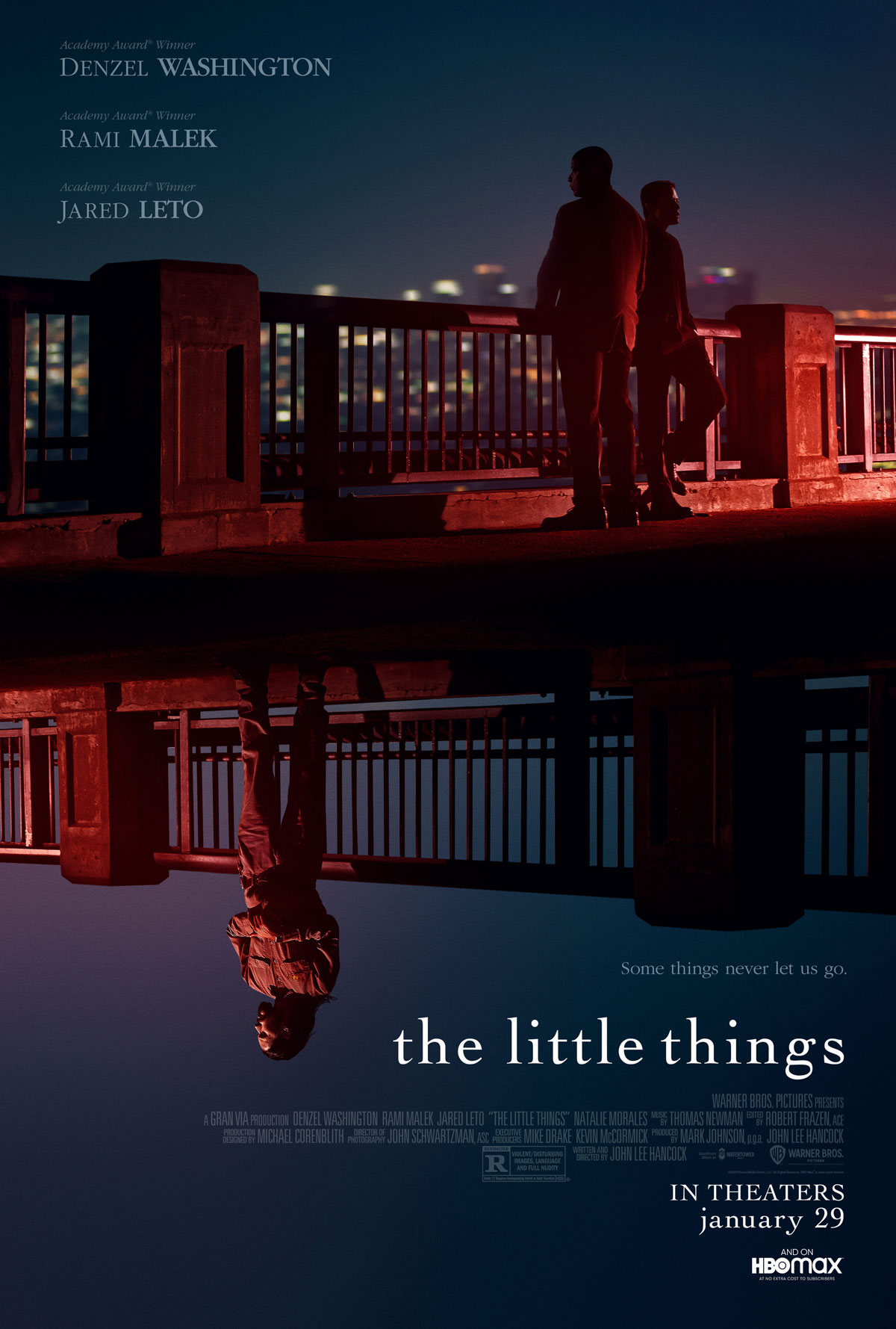 This movie ended and immediately left my head. You say The Little Things and I say, is that supposed to mean something to me? Not a great sign for a film that stars otherwise pretty memorable stars. But directed by a guy, John Lee Hancock, whose resume of light period pieces and inconsequential biopics like The Blind Side certainly doesn’t suggest taking on a dark, neo-noir crime thriller. I mean, when you’re essentially trying to remake Se7en, I don’t imagine he jumps to the front of the line. But for someone somewhere at the movie studio, I suppose he represents a solid, safe choice. Which, whatever.

So, why, you ask is this film so unmemorable? I honestly can’t remember. But if I had to hazard a guess, it’s because the thing is just so trite. So manufactured. So obviously scripted. Which, to be fair, can either lead to a taught thriller, or a muddled piece of stilted melodrama. The Little Things, unfortunately, falls into the latter category. There is a not a scene in this thing were you can’t see the actors acting. The words on the page in their mouths. The overly-complicated, but singularly uninteresting script raising not much but yawns. Everything from the pacing to the questionable logic of the narrative kind of left me scratching my head that something this relatively high-profile could come out as such a mess.

Let’s start with the basics. Joe “Deke” Deacon (Denzel Washington) is a deputy up in Bakersfield, CA. For those of you who haven’t been to Bakersfield, it is literally the butt of every “boring” joke for people from LA. Well, there or Fresno. The point is, it’s essentially nothing more than a podunk stopping point between LA and places that are better than Bakersfield. It’s boring. If you’re a cop who wanted to retire from the LAPD without actually retiring, you’d move to Bakersfield, because nothing ever happens there. Which, in the case of Deke, is exactly why he’s there. It seems that he had a hard time of it in LA as a homicide detective. Because… wait for it… there was that one case he just couldn’t solve that he obsessed over that eventually ruined his relationships, his health and his career. Wow, I did not see that coming! I mean, this is the oldest trope in the book, and from jump made my eyes roll up into my skull.

Well, as (un)luck would have it, Deke is sent down to LA to pick up a piece of evidence that pertains to a murder in Bakersfield. That contrivance was actually pretty confusing to follow, but I just went with it. There he meets young hotshot detective, Jimmy Baxter (Rami Malek), who just so happens to be investigating a murder that is eerily similar to that big case that drove Deke out of the LAPD to begin with. What are the fucking odds! And here’s where things start to make even less sense. It seems that Deke has left a pretty bad taste in everyone’s mouth in the department. Because, again, he became a lunatic over this murder case he obsessed over. But the young Baxter thinks he could be an asset in his investigation, so he just asks him to tag along. So, get this, a cop who has no jurisdiction in LA — after realizing the serial killer similarity between this case and his old case — just files for vacation time in Bakersfield and becomes the co-lead on an investigation in LA. Now, I’m no cop, but I’m pretty sure this isn’t how things work.

Enter creepy Albert Sparma (Jared Leto). The world’s most obvious suspect. So obvious you’d think someone like Deke wouldn’t fall for his tricks meant to provoke him. Such a hothead, that Deke! They interrogate Sparma to determine if he’s the serial killer they’re looking for — and in serial killer trope heaven, they can’t make anything stick to him. So they plan a shadow investigation to track the dude and wait for him to mess up. Which leads us, as the viewers, into way too much sagging narrative of Leto glaring and Denzel and Rami skulking and way too easily picking locks and sitting very obviously in cars outside Sparma’s apartment. You might even think that perhaps these two are not particularly good detectives. Intertwined with all this is some larger conspiracy in Deke’s past, which is untangled via flashbacks and whatnot. A conspiracy that is confusing until the end of the film. Which is essentially the “twist,” but is told in such a circuitous way so as to conceal it that it just ends up confounding the viewer. It’s clumsy as hell.

Anyhow, Leto is doing the heaviest lifting here, doing his weirdo thing. Skinny and greasy and mumbly, he transforms himself into… pretty much the same calm-on-the-surface, creepy-as-shit character he played in Blade Runner 2049. And every performance since My So-Called Life. He’s for sure a weirdo, but his character motivation is super-opaque. Seeing Denzel playing washed-up isn’t new for him. Shit, he played washed up seventeen years ago in Man on Fire. And again nine years ago in Flight. Though his performances are starting to show his specific acting tics (like that sad, hangdog look he always gives) more and more as he ages, which are making said performances a bit too predictable and specifically Denzel to let you separate his character from the man. Malek, as he tends to be, kind of disappears. But not in the way an actor might hope. He doesn’t disappear into the character, but rather disappears in the film. His style is so specific and so low-key, mush-mouthed Rami Malek that you wonder sometimes what he’s saving his energy for. Like does the dude have another gear, or is this just it? Which worked for the zoned-out, drug-addled Elliot in Mr. Robot, but sometimes you just want the dude to hit the gas a little bit, or downshift and let the engine roar a little in the corners.

It’s taken me longer to write this review than I thought about this film after watching it. The ending gives a little something to think about, and would have been maybe a decent denouement if it were handled better and with more subtlety. Again, there’s a shot in there that just undoes any work the ending tries to put on the line. It’s almost criminally irresponsible that Hancock decides to include it. Oh well, I’m sure we can look for his next movie, The Penguin: The Life of Ron Cey, or whatever.