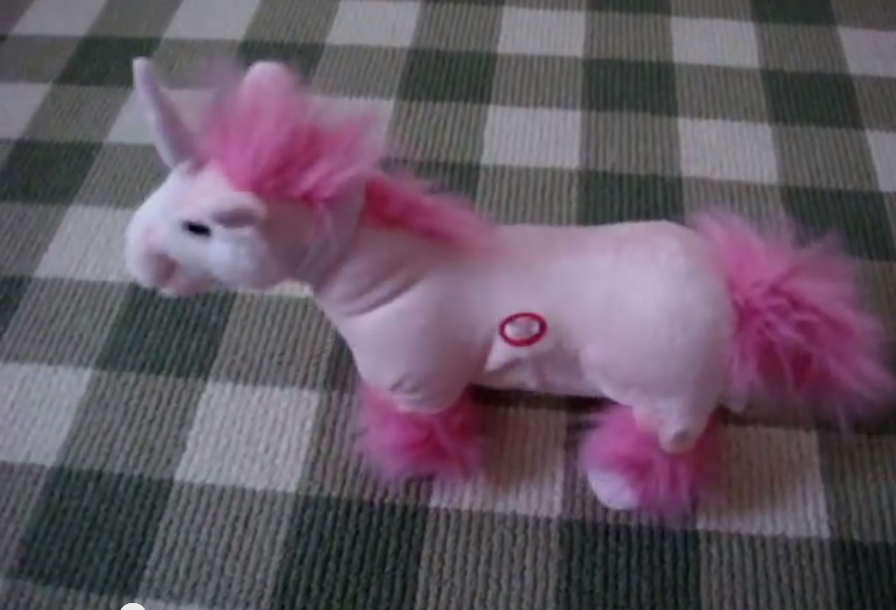 So this innocuous pink unicorn, along with a bunch of other stuff, arrived at our house courtesy of Grandma Hipster and her job at the Cancer Society thrift store in LA. It went on Hipster Jr. Jr.’s shelf for several months, its secret agenda never revealed.

Until one day someone decided to push the button on the side of the thing, unleashing what has to be the weirdest song ever to be associated with what purports to be a child’s toy, “Bad Moon Rising.” To remind you, there are the lyrics (in the abbreviated form sung by the unicorn):

I see the bad moon arising
I see trouble on the way.
Don’t go around tonight
Well, it’s bound to take your life
There’s a bad moon on the rise

Er, that seems appropriate for a child. And completely consistent with a pink unicorn. But even weirder than the fact a child’s pink unicorn is singing a Creedance song about the apocalypse is the awkward Chinese pronunciation (the toy was manufactured in China) and the almost direct rip of the ‘Macarena’ tune. Watch the video and notice the last little death spasm as the unicorn realizes even it’s embarrassed about the whole affair.