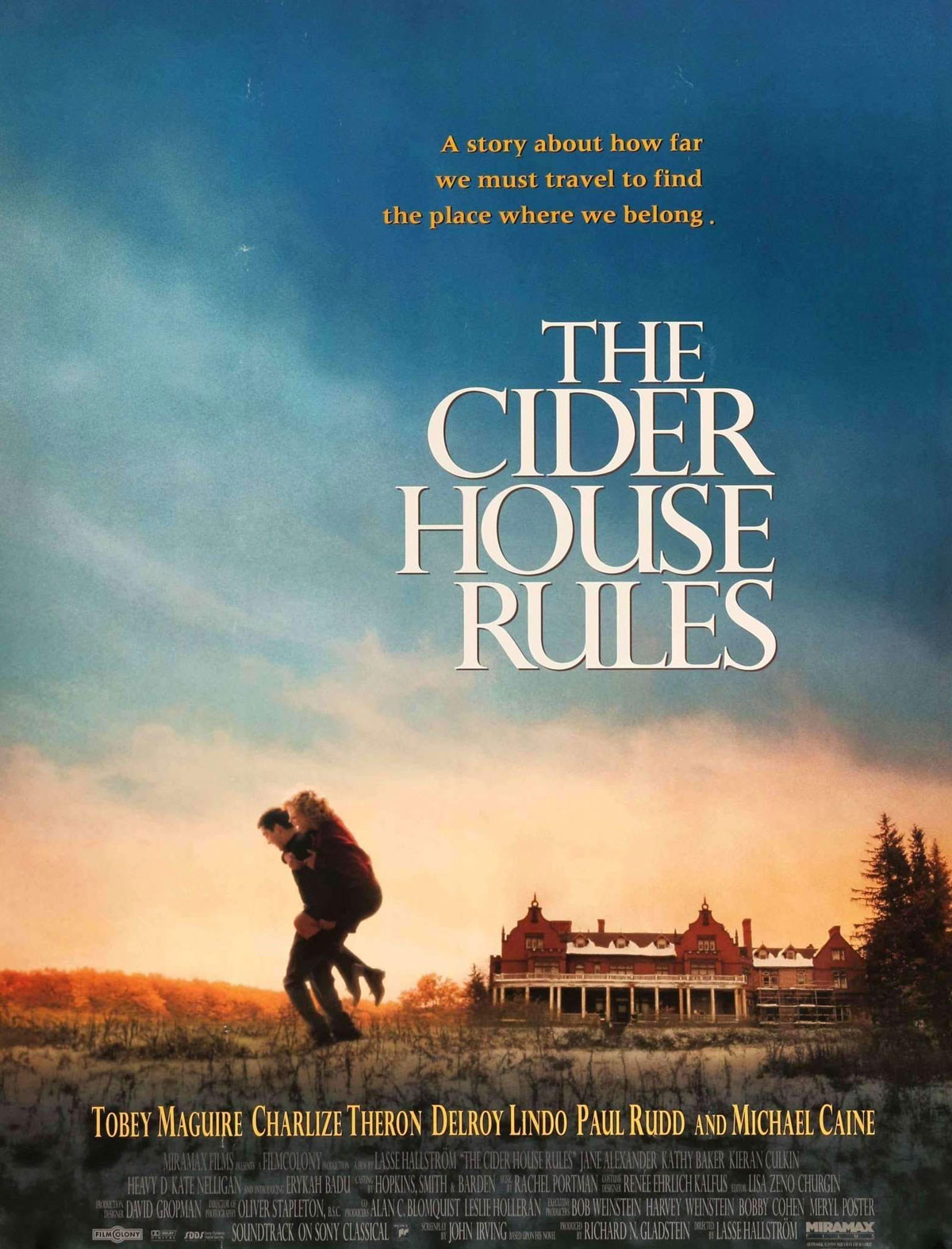 Another in a long line of adapted John Irving novels, this one in particular captures the essence of what I think John Irving is going for in his books. Gone are the wacky sped up scenes of The Hotel New Hampshire and The World According to Garp, replaced by lingering shots of the countryside and the majesty of human suffering (of which Irving is so fond and Hallström is so famous for shooting). I remember reading The Cider House Rules a long time ago. I remember the pace of the book being slow and meandering. The film refreshed my memory, and I was indeed correct — it was a pretty boring book and, thusly, a pretty boring movie.

There are two ways a film can go if an author of a book adapts his own work for the screenplay: he/she is so in love with the story and its total sum parts, that he/she tries to cram all the narrative into the constrictive box of a two hour movie and ends up telling us nothing about the characters, or, as in this case, he/she can be so enamored with certain scenes, that he/she lingers on them and ruins the flow of the film while he/she fixates on these particular scenes. You can tell after one viewing of this film that John Irving put a lot of his heart into writing this screenplay, and probably begged the studio to let him release the eight-hour version I’m sure he would have preferred. Instead we have something that feels like two distinct movies. It reminded me of Full Metal Jacket in that way (I know it’s a weird comparison) with the first movie being the soldiers at basic training and then the second them out fighting in Vietnam.

This one starts in the orphanage, as we see Homer Wells’ (Tobey Maguire) relationship as patriarch to the children, along with Dr. Larch (Michael Caine). His relationship with the children is actually way more interesting than anything else that happens with Candy Kendall (Charlize Theron) later on. The second half has Homer as an apple picker falling in love with Candy while her boyfriend Wally (Paul Rudd) is off flying bombing missions over Asia.

Like I wrote, there are many of the same scenes in the book as in the movie (scenes that Irving obviously couldn’t do without), except they fall in completely different orders, years apart and without the benefit of the much more developed plot of the book. In fact, the book and the movie basically start and end in the same place, but the book spans twenty more years and a couple more generations. Maybe that’s why the movie seems to be missing something — why the scenes after the initial orphanage scenes don’t carry much weight. All the events in the movie are crammed into a very short time period, and, without giving anything away, the relationship between Homer and Candy gets much more complicated in the book than it does in the movie, leaving you to feel a kind of “who cares” about what seems like a frivolous relationship between the two, based on her loneliness and his horniness (or lack of experience with women).

Overall, the film feels a bit disjointed and both slow and rushed at the same time. If Irving could have written this as a mini-series, (a la The Thorn Birds) he may have had a winner on his hands. But, as it stands, it just felt like we couldn’t delve deep enough or keep up our sympathy for characters that we really couldn’t understand. [movie theater. MF]