I fuckin’ hate snow. This is a recent phenomenon. I used to love snow. Growing up in a warm weather state, snow was never a hindrance or something heavy that had to be shoveled off my walk. Snow was something I only saw when I was shooshing down slopes in one of many awesome ski resorts like Heavenly, Mammoth, Alta, Solitude, Park City, and Snowbird. I even enjoyed the snow while being brought down in a toboggan after tearing knee ligaments at this crappy ski “resort” when I was in fourth grade (or maybe it was this one). Point being, snow is fun when it’s an activity, but a complete fucking nightmare when you have to deal with it in your everyday life. I don’t know how you East Coast freaks handle it.

Granted, I lived through the Blizzard of ’96 in Manhattan (and the Superstorm of ’93 in Syracuse), but this recent stuff is completely insane and annoying. Why am I so put out? Because I have to shovel my own shit now. 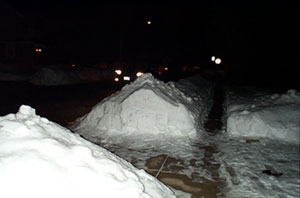 There’s no super in his mesh shirt with a cigarette dangling from his mouth mumbling in Spanish about how he never should have moved from The Dominican Republic to shovel snow for stupid Upper East Side kids and their dumb poodles. Now I get to shovel this stuff myself, while buried up to my knees and sweating and itching in my wool sweater. I’m starting to understand how healthy 30-year-old guys have heart attacks in their driveways while lifting the white stuff and end up looking like Jack Nicholson at the end of The Shining. The thing that pisses me off more than anything is that there’s been like two total inches of snow between ’96 and ’02, and only now do I move to a place with no super, a lot of sidewalk and neighbors who actually give a shit whether or not their walkways are clear. It almost makes me miss macro-apartment living.