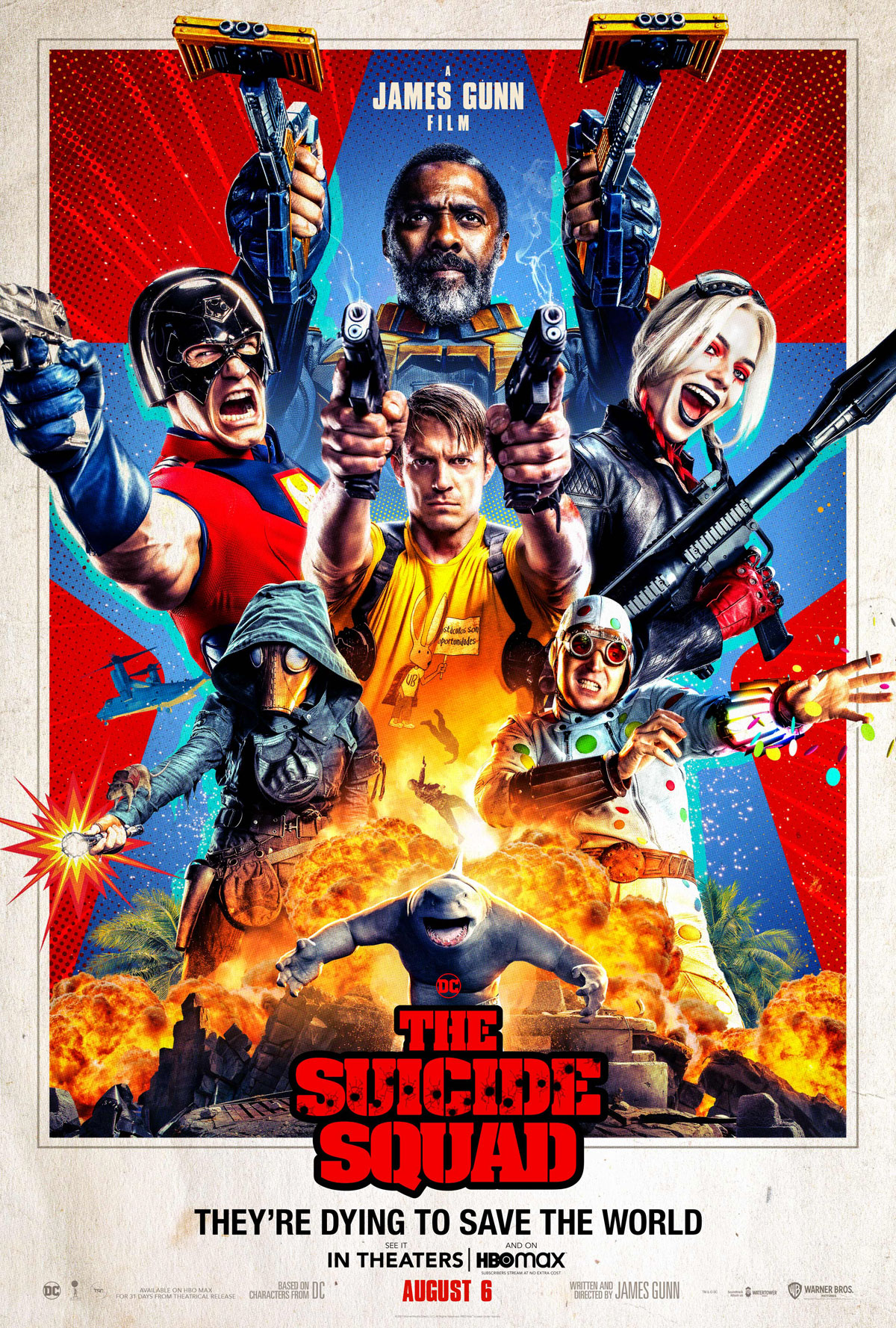 Am I a terrible person for perpetuating our superhero culture? For adding to the Marvelization of our cinematic universe? Even if this particular film is from DC? Even if this The Suicide Squad is essentially a reboot of Suicide Squad (no “The”) from a mere five years prior? The answer is, I’m definitely part of the problem. I’m also an awful parent for letting 12-year-old Hipster Jr. Jr. see this legit R-rated movie. It’s like The Boys, but with way less graphic sex. That said, the plot is so simple that perhaps they actually wrote it for pre-teens. Or maybe that’s just how these types of movies roll.

This is essentially it: some shady-ass government officer (Viola Davis) puts together two landing parties for a mission in a fictional country that has fallen into the hands of a military regime. These teams are made up of criminals, prisoners and misfits, compelled to join the “Suicide Squad” with a promise of freedom or expunged records or somesuch thing. Most know the odds of surviving are slim, but each thinks he/she will be the one to do so and get out of their predicament back home. Thing is, one party thinks it’s the only party, and the other knows they are the real party and the other is the real suicidal decoy. Like I said, shady. Neither team has a real idea of what the mission is, other than they have to find a lab that was set up by the Nazis in the 40s and destroy something called “Project Starfish.” That’s the whole plot.

The weird thing is, the film’s creators spend time introducing us to these characters a la those old heist films. I wouldn’t say it was in depth, but it’s enough to make us assume they’ll be around for a bit. Turns out the whole first action scene is almost exactly the same as the convoy assault scene in Deadpool 2. To the point where that Deadpool group is called X-Force, and the one in Suicide Squad Task Force X. Weirdly coincidental. Almost shamelessly so. But most of those folks we spend time getting to know end up getting cut down almost immediately. Maybe that’s the filmmakers trying to “shock” us. Or maybe it just is what it is. It felt weird to me, but what do I know?

I have no clue if this is typical DC stuff outside of Superman and Batman. Because a dude who throws polka dots, a woman who can control rats and a manshark thing voiced by Sylvester Stallone seems… weird. Mainly because it is. Their powers are kind of stupid. Or seemingly non-existent. Like I watched this whole thing and still don’t get what Harley Quinn (Margot Robbie with a, uh, Queens accent) brings to the table other than being crazy. Which I suppose makes them underdogs and weirdos. And who doesn’t love an underdog? Even if that “person” is a sharkthing that eats people whole. Or a dangerous psychotic. Or an assassin.

Ultimately the big bad is akin to the Stay-Puft Marshmallow Man from Ghostbusters. An absurd, cartoon-like creature with no lines of dialogue or personality. Just a giant, town-crushing monster. Which is… not that compelling. Honestly, the narrative is a bit all over the place. There’s just enough to string together the action scenes. Some of which are pretty fun, truth be told. They’re violent and probably break just about every law of physics, but James Gunn knows how to direct the hell out of amped-up, technicolor craziness. And interject that action with witty banter and some actual laughs. You can certainly feel the Guardians of the Galaxy DNA all over this thing. I’m sure DC was like, “We want our Guardians movie.”

And, look, Joel Kinnaman is a lot of things as an actor, but he isn’t funny. He doesn’t have the comic timing of a Chris Pratt. He’s not really asked to do that much other than to look like an imposing Swede, but Gunn’s words in the mouths of these characters just doesn’t resonate the same way as it did in Guardians. The characters aren’t as developed or sympathetic. They are — for lack of a better term — comic book characters. Loud and brash and turnt up. Gunn does try a couple quieter moments, leaning on the father / daughter-like relationship between Idris Elba’s character, Bloodsport, and the young lady, Ratcatcher 2. Whose actual father, Ratcatcher, is played in flashback by the ever-present… Taika Waititi! But, ultimately, it just doesn’t hit in the same way. The warmth doesn’t feel earned. Instead it just feels like a bolted-on obligation.

So, yes, the movie is entertaining. I could probably watch it again and catch things I missed the first time. There is a lot crammed into the frame. It’s even bordering on fun at times. But is it a “good” movie? I mean, that all depends on if we’re judging it on a superhero movie level or a film level. I think the former is a fairer comparison. And in that regard, it’s a decent addition to the canon. Mostly brainless, yes. But, hey, when you want lots of action and some chuckles and gore, you could certainly do worse.