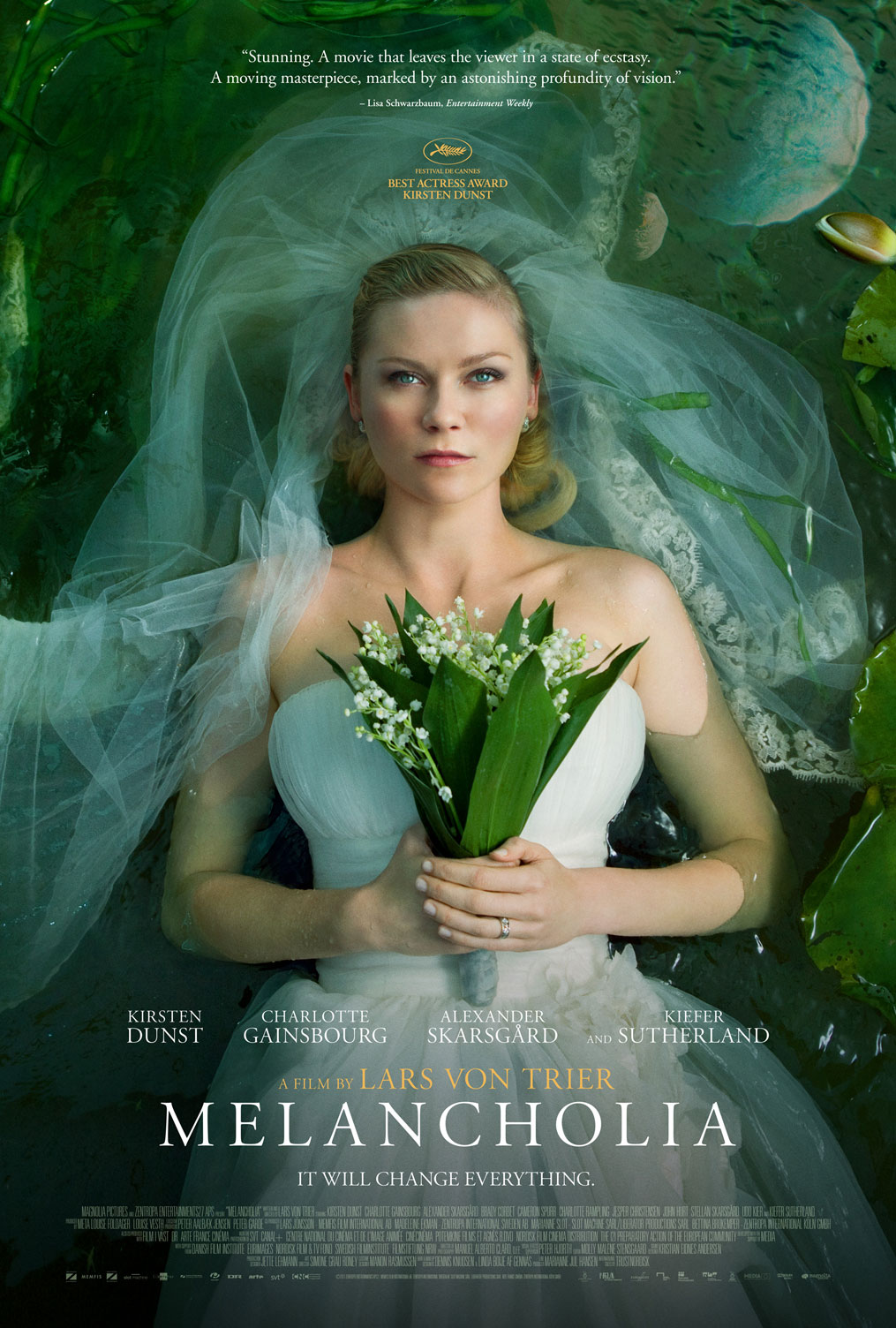 I’ve somehow gone my entire life without seeing a Lars von Trier film. And, honestly, I felt as though I could have gone the rest of my life without seeing one. His shit sounded pretentious and super-Euro and just plain boring. Like Jim Jarmusch, but more into Nazis. But then Ms. Hipster came to me after seeing Melancholia and practically begged me to watch it so she could talk to someone about it. You know, shared snobbish misery. The funny thing is, Ms. Hipster generally hates highfalutin movies. She deems them “talky-talky” and usually walks out when I’m watching them to go look through Land of Nod catalogs. I tried to play her a Whit Stillman movie at some point in the 90s and she stopped talking to me for a week. Aaron Sorkin makes her want to stomp puppies. Point being, if she found this Lars von Trier guy tolerable, even in his pretension, then perhaps he wasn’t as over the top as I had assumed.And then I was forced to sit through what felt like fifteen minutes of super-slo-mo renderings at the very beginning of the film of Kirsten Dunst in various painting-like scenes surrounded by swelling classical music that had me reaching for the fast-forward button. And just as I was about to hit it, the thing kicked into normal mode and unfolded the story of an emotionally detached young woman on her wedding night in some giant castle in what is apparently Sweden. Von Trier has this super-naturalistic way of shooting scenes and writing dialogue where it hardly seems like the actors are acting and lines are delivered in an almost tossed-off manner that leaves it up to viewer to determine what’s important and what’s not.

In those slo-mo scenes we see what we can only assume is the end of the world. Birds fall from the sky, insects gather in droves, lightening gathers on Kirsten Dunst’s (Justine) fingertips and then a giant planet runs into the Earth. So we see all that as a precursor, knowing how everything is going to end, even as a marriage devolves before it even starts. Justine, our bride, has what looks to be a fairytale wedding in a giant castle to her fairytale man (Alexander Skarsgård) with her dysfunctional family in attendance. Her mood degrades as the night goes on and her attachment to the reality of the situation becomes less and less involved. It’s kind of this languid spiral into depression, where her outlook on things goes from eager to hopeless over the span of several hours. Gradually things unravel to the point that the whole situation becomes untenable and this part of the film ends.

Cut to a while later, where a fully catatonic Justine comes back to the castle where she got married and her sister, brother-in-law and nephew live. Things happen and we discover that planet we saw crashing into the Earth in the beginning scenes is in fact heading toward the Earth. People are convinced it’ll only do a “fly-by,” but Justine’s sister is going on the Internet and reading the conspiracy theorist’s, uh, theories that it’ll be a direct hit and is becoming continually agitated. Justine, the depressive, becomes the more realistic and straightforward of the two. Now, we know how this is going to end because von Trier already showed us. So all this theorizing is just kind of showing us how each character reacts to impending catastrophe. The grounded people are freaking out to some extent, while the depressive is just dealing with it.

The narrative is in no way scientifically accurate. I can’t imagine a planet can swing that close to Earth without tsunamis and whatnot just wreaking havoc everywhere, or whatever happens when a giant gravitational force that wasn’t there is introduced that close to the Earth, but von Trier certainly makes it look cool. And it’s really not the point. In fact the whole impending destruction of the world isn’t the point. I think that’s why he gives away that away from the jump. So we’re not sitting there wondering “will it, or won’t it?” Instead, this is an obvious study into von Trier’s own dealings with depression (with the rogue planet having the too-obvious name of “Melancholia”) and its overwhelming and always lingering crash. Or maybe that’s just me trying to interpret that which I don’t know.

The acting is great all the way around. Even Kiefer Sutherland, as the uptight, super-serious brother-in-law projects a certain “gravitas” (see what I did there?) and this Charlotte Gainsbourg woman, with whom I was relatively unfamiliar, as Justine’s sister is really good as well. Granted there is the inexplicable fact that everyone in Justine’s family has English accents (her sister, Gainsbourg, her father, John Hurt and mother, Charlotte Rampling) while she does not. And I don’t think von Trier gives a shit. She’s definitely the star of the film by a million miles and I’m certainly glad she didn’t attempt the accent. The second-half of the movie, after the wedding, really only has four people in it surrounded by this massive castle and the beautiful fjords in which it sits. So she gets a ton of room t act. Not like Mary Jane from Spider-Man act, but a human being coming to terms with the end of the world act — with more nudity. [Netflix, MF]