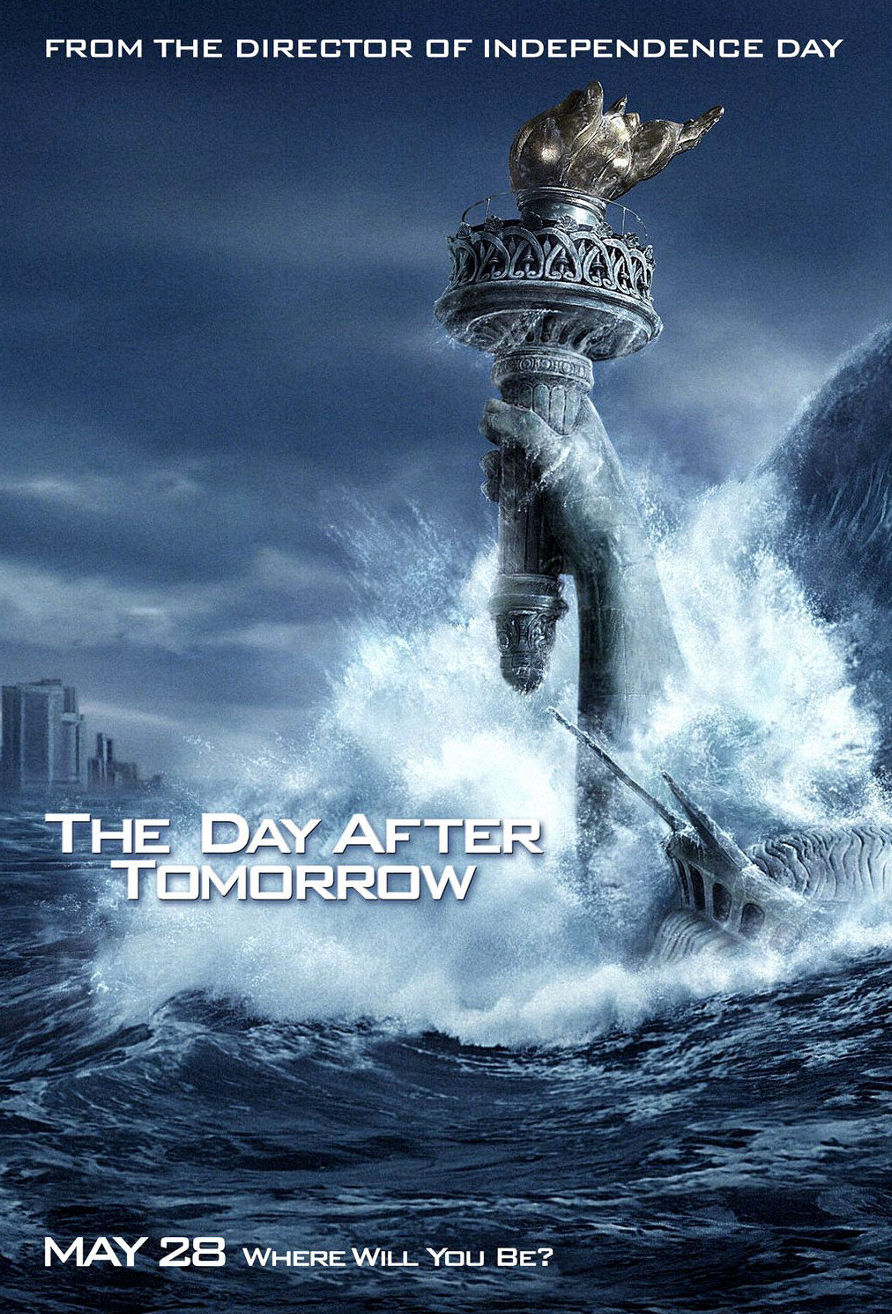 The Day After Tomorrow

I seem to see about two movies a year in the theater these days. I don’t know what the hell has happened other than my life has gotten very busy and I find that there are very few movies out there that seem worth the time and money it takes to get my ass in the theater. So what movie do I waste one of my two trips on? That’s right, a movie based on a book by notorious crackpot, Art Bell, about some giant storm that is supposed to come and wipe out the world. And I see it on opening night at the Ziegfeld no less.

Not to mention the movie is written and directed by disaster film expert and notorious ra-ra American cheese-master, Roland Emmerich (who is, oddly enough, a German). The man that brought us both Godzilla and Independence Day is not really stretching his skill set with another big-budget, big-effects summer popcorn movie where shit explodes, people die and the truly cheesy rise to the occasion.

I didn’t walk into this movie with any expectations of it being a fine film, but what I found defied even my standards of absurdity and hokiness. Why the Sierra Club thought the message about global warning in the movie was serious enough to warrant handing out leaflets to theatergoers as they stood in line is beyond me. After all, this movie wasn’t about the ramifications of our lackluster environmental policy, but an excuse for the folks at whatever studio to destroy Los Angeles and New York City in a blaze of CGI glory.

The ensemble cast brings back all the characters you loved in ID4. You even get Randy Quaid’s brother, Dennis, as the workaholic (instead of alcoholic) father who, again, realizes that all he wants to do is make his son proud of him and fulfill a promise he made him after spending too much time with his work and not enough time raising his kid. And then the wackiness starts. While on an expedition in the North Pole, Jack Hall (of course his name is Jack) witnesses global warming first-hand as the ice shelf he’s researching literally splits in half”or something. What a coincidence.

He proceeds to go back to the world and share his findings with world leaders, who, of course, don’t believe any of his nonsense. And, truly, neither do I. And this is where the problems start. There is absolutely no sense of time in this movie. From what I can tell, the effects of global warming start like two days later as giant hailstones fall in Japan, and then tornados destroy Los Angeles, and then all hell breaks loose. And by hell I mean silliness.

Among the stupidity are some horrible CGI arctic wolves who somehow survive the giant NYC flood to attack our heroes. Jack manages to drive from D.C. to Philadelphia on “impassable” roads in route to rescue his son, Sam, in New York City (of course that’s his name). Jack then walks from Philly to Manhattan in a blinding blizzard, dragging one of his injured compadres half of the way (in a toboggan that mysteriously appears out of nowhere). As I mentioned earlier, we have no sense of time in the movie, so this walk seems to take about a day or two (although it’s most likely supposed to have been longer).

Let’s see… Our hero, Jack, sits in just a turtleneck in a thin, little tent in the same weather that is causing people inside a giant stone edifice to almost freeze to death. There’s some sort of bizarro weather condition in which the eye of the giant storm opens up overhead and everything below it freezes instantly. We actually see as the cold descends from the sky to freeze everything in its path. This phenomenon freezes oceans and giant, steel buildings, but can apparently be stopped by a simple wooden door. Who knew?

The US president’s big plan to deal with the storm is to evacuate the southern half of the United States to Mexico. Now there’s a plan! That, of course, leaves the northern half to freeze to death in their homes. Luckily he doesn’t have to worry about re-election because surprisingly (!) he is the last person to be evacuated from the White House and dies in the storm. Somehow Jack’s wife leaves a D.C. hospital hours after the president and manages to get herself all the way down to Mexico in the back of an ambulance with a poor cancer kid in tow. Ugh.

There are so many more terrible gaps in logic and sloppy script points, I don’t have enough memory in my computer to hold them all. Of course everything ends happy for our family and the triumphant Americans, but nobody seems overly distraught that about 90% of the people in the northern hemisphere are dead. Oh joy! There is basically no plot going on here, and as is the norm these days with a lot of Hollywood movies, the thing relies on special effects to fool the audience into thinking somebody actually put some effort into making a quality piece of work. The shit is sloppy and careless and a total abomination–but if you want to see a giant tidal wave destroy Manhattan, you could do worse.