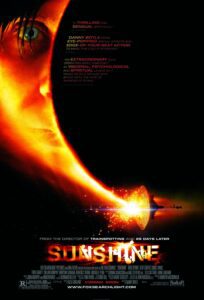 I seem to be doing a lot of doubling up of late. First I had my whole Bourne Trilogy run, followed by yet another Matt Damon in the CIA movie, The Good Shepherd. And now I’ve followed up 28 Days Later with another Danny Boyle directed, Cillian Murphy starring film in Sunshine. These coincidences are completely coincidental, but not uninformed. Whatever the case, it’s just a little weird.

It’s even clearer after watching this film that Danny Boyle really puts his films on the backs of his young, male stars. First he had Ewan McGregor in Shallow Grave and Trainspotting, and now he has the equally charismatic (and skinny) Cillian Murphy in 28 Days Later and Sunshine. He is fascinated with their faces, focuses attention on them and chews them up whole. Starring along with Cillian in this film is his nemesis, the sun. Yes, the sun. And what good sci-fi movie, which this is in the purest 2001: A Space Odyssey kind of way, doesn’t have some sort of metaphorical and religious and gigantic meaning of life overtones? This one is chock full of deeper meanings and the face of humanity, etc.

Not surprisingly, the film looks cool as hell. And unlike a lot of sci-fi movies both past and present, it didn’t look cheap. Too many times movies rely on stage pieces or inordinate amounts of CGI to fill in the creative holes, but Boyle manages to show us just enough in every frame to not ruin our sense of place, he doesn’t overwhelm our senses with technology or cold/grimy aesthetics (a favorite of sci-fi), letting the story and characters come forward. Sure, there’s some cool stuff, including the holograph room that allows these astronauts, on their deep space journey to kick-start a dying sun, to recharge by experiencing simple Earth activities. And the ship itself looks like a giant eye, but otherwise Boyle plays it relatively straight. There are no robots and shit, in other words.

So the story goes that these astronauts, all with different skills, have been sent out on the second Icarus mission (the first was lost without any communication) to shoot a bomb into the sun in an attempt to get it working again. You see it seems the sun is dying, which of course means the extinction of the human race.It’s a very noble mission, and sounds a little silly when you think about it. There is talk of dropping the payload and flying back to Earth, but somehow I think they all know that this is a suicide mission.

So they’re way the hell out in space, flying towards the sun and some bad stuff happens. Things start to break, fires start in the ship, and people start to die. This starts infighting, near-mutinies and all sorts of whatnot. The thing has elements of every more cerebral disaster movie of this type you can think of, including 2001, The Abyss, Alien and a bunch of others that I’m blanking on, but you get the idea.

Meanwhile the crew gets themselves into a real pickle trying to complete their mission. After all, the fate of the entire planet is in their hands, and they need to deliver that bomb into the sun no matter what. That is even if some bizarre malevolent entity has invaded their ship in an attempt to rectify what it feels is cosmic balance. This is where the movie goes off the rails a bit, turning into a weird mixture of slasher film and neo-philosophical jumble. Whatever the case, I didn’t hate the shift entirely, but was just a bit surprised. Funny enough, I told a friend I had rented this thing, and he warned me that the first three quarters of the movie were great, but that the last 15 minutes or so ruin everything. So I was expecting something really, really bad. What I got was a bit of a mess, but not completely beyond help.

This movie barely made a peep at the box office (like one of the worst totals I’ve ever seen). I wouldn’t be surprised if it didn’t get a second life on DVD. After all, with people buying all these Blu-ray DVD players and big screens, they’re going to be clamoring for gorgeous films like this one, regardless of plot. As tends to happen with rented DVDs, there were several places in the disc that were filthy enough to actually stop the thing. I had to pull it from the player, clean it as best I could and forward to the scene on which it staggered. And then towards the end of the film when the aforementioned malevolent entity enters, Boyle uses one of his strange filmic techniques where the thing basically burns the lens and causes the film to stutter and skip and do all sorts of things that made me wonder if in fact my DVD was screwed, or if he intended the effects I was seeing. To this day I have no idea what was intentional and what was mechanical failure. Whatever you think of the movie, it will, in the words of Ms. Hipster, stick with you.