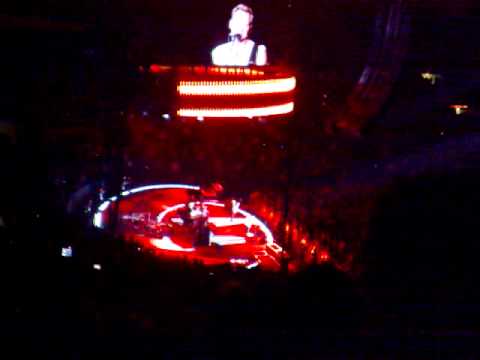 So it had been over twenty years since Mrs. Hipster last saw The Police in concert. This was back when she carried a framed 4×6 photo of Sting with her from class to class, setting it up on her desk and dreaming of the day when he would ride up on a white horse and sweep her away to his castle or hive or wherever the hell it is he lived at the time. Needless to say she didn’t end up marrying an amazingly wealthy rock god, but at least I have more of my original hair.

And how did Sting become the music and advertising mogul that he is? Apparently by charging like $90 for crappy seats to his shows. Actually they probably should have titled the tour “Andy Summers, Back in the Black.” We honestly didn’t get the idea to go see the show until several days after the tickets went on sale, meaning that we got what we got and paid whatever The Police, their management and Ticketmaster wanted to take me for.

It was inevitable that the show would be a disappointment. I mean these guys were the seminal rock band of our early lives, and shaped a life full of music appreciation and rock band idolatry. My “Can’t Stand Losing You” 45 played non-stop on my sweet Fisher-Price record player, probably driving my folks to drink. Hearing the song live almost thirty years later was hardly the cathartic, defining moment that I thought it might or could be. And, seriously, what was with all the Andy Summers solos? That man is by far the least talented of the three members, yet they practically gave him a solo in every song–solos that were in no way part of the original tune. It was clear that Sting and Copeland were in one camp and Summers in another. Perhaps they just gave him the droning solos to appease some sense of guilt, or more likely to prove a point. The point being that nobody wanted to hear that crap. Ah, well. At least we weren’t the oldest people there by a long shot.