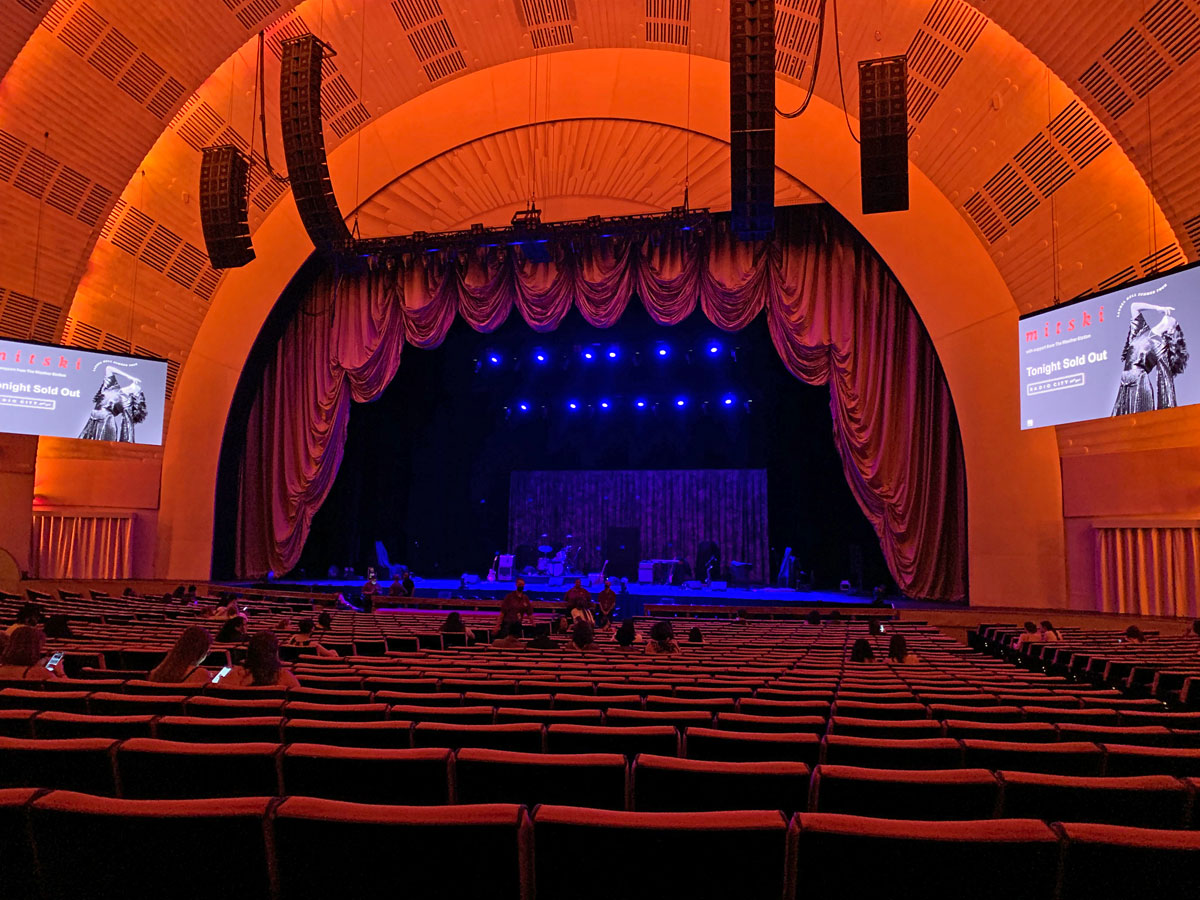 I didn’t even know what a Mitski was a few months ago, before being introduced to her by Hipster Jr. Jr. and then eventually being groomed to buy her concert tickets. Issue was they were running about $650 a pop at the time. That would mean one show would cost me probably the sum total of every show I’d seen at Bowery Ballroom, Irving Plaza and Mercury Lounge over the span of my long-ass lifetime. But when incredibly terrible Ticketmaster pricing and reseller gouging shut the door, COVID and a rescheduled date opened a window. Or however that saying goes.

Somehow in my many years in and around NYC, I’ve never been to Radio City. Despite currently working directly across the street for about six years. Like literally one of our conference rooms is named Radio City and looks out over the venue. I’ve walked by the entrance to a line of auditioning Rockettes, and fought my way through crowds of Christmastime tourists swarming to photograph and attend the Christmas Spectacular. It seems like the whole area is kind of the epicenter of NYC holiday foot traffic. But this is summer in the stinkiest city on earth, so there were less crowds, but still a good swell of Europeans looking for something to stand in front of with their phones. Anyway, this was the evening where I got to stop being one of those tourists, and actually enter a space I’d only ever imagined. Sans kick-lines, of course.

Let’s get this straight: I am old and male. Hipster Jr. Jr. is the opposite of that. As was ninety percent of the crowd. I get the sense this is Mitski’s core audience: young women. Some younger than others, but I’d put the range at like 12 – 22. I was not alone as an older, male chaperone with either a singular or group of young ladies. The same young ladies who generated ear-piercing screams each and every time Mitski did one of her signature, weird-ass dance moves. “Dance” being a stretch, but certainly something that resembled modern movements that mimicked something akin to dancing. It’s her thing, apparently. As is a vaguely alternative singer-songwriter vibe that is honestly kind of difficult to categorize. The internet has labeled her everything from indie rock to folk punk to pop rock. I don’t think any of those accurately capture what she’s doing, though. I think it’s more like art rock. Or art pop. Or just straight-up alt singer-songwriter. Like a mashup of Aimee Mann and the Yeah Yeah Yeahs. Which I guess kind of makes her the Talking Heads? I don’t know.

Whatever the case, Mitski is her own woman. She’s opened for everyone from the Pixies to Lorde. Pitchfork started her three album reviews with a 7.7, 8.5 and 8.8 respectively. So she was apparently a known commodity (and a well-reviewed one at that). Just unknown to me. And, frankly, I don’t know much more about her after seeing her show. She’s not… chatty. She came out on stage, flanked by a drummer, guitarist and three others who switched between guitar, bass and keyboards. The middle of the stage was adorned with a mysterious door that… well, it never got opened or really used. Though she did seem to go kneel next to it between every song. We speculated she was checking the setlist. Or maybe taking a sip of water? Point is, she came out, started her songs and kind of never broke out. No banter about being in NYC. No introducing the band or the songs. No storytelling. Just played for about 90 minutes, said she loved everyone, played one more song or so and walked off. It wasn’t a distant performance, but I did find it a little odd that she didn’t address anyone or anything. Didn’t really break that fourth wall of the performance until the very, very end. Quite a different experience than my last show where an inebriated Bob Pollard talked a blue streak. Maybe it was a matter of the large venue. Maybe that’s just how she rolls.

Can I comment on the music? Not really. She sounded good. She can certainly sing. And the aforementioned dancing is weirdly suggestive. But almost in a cartoonish way. She wore this outfit that looked like a cross between silk pajamas and like a House of Flying Daggers getup. Which I suppose was a convenient and appropriate fit for her kicking and punching thing, along with her, uh, below-the-waist adoration of that microphone (which made me cringe a bit sitting next to Jr. Jr.) Her songs all seem to include the word “body,” and I think are generally about her struggles in life and in love. I’m bad at lyrics. But the girls in the audience certainly seemed to know them, singing along with what Jr. Jr. alerted me were her “popular” songs. She, like me, clearly scoffs at newbies, of course. The ones who know the lyrics to the “hits,” and love to sing along. Such a serious music fan, she is. It was a pretty entertaining show for an artist with whom I had no familiarity. Jr. Jr. had a good time and we even waited in the longest merch line ever invented by man just to have the item she wanted sell out right as we got up to the front. She ended up with a t-shirt that she then slept in and wore for like three days straight. A good sign.

Did I mention this was Jr. Jr.’s first concert? I would have rather brought her to a rock show at a smaller space (and saved some serious coin), but I suppose this gave her a really nice experience that she’ll probably never repeat. Not to be a downer, but when you start your concert career with a popular artist in a classy venue with tickets that cost more than the GDP of most small, island nations, you have nowhere to go but down. Next show? Dive bar gutter punk. Then she’ll see how the other half lives.