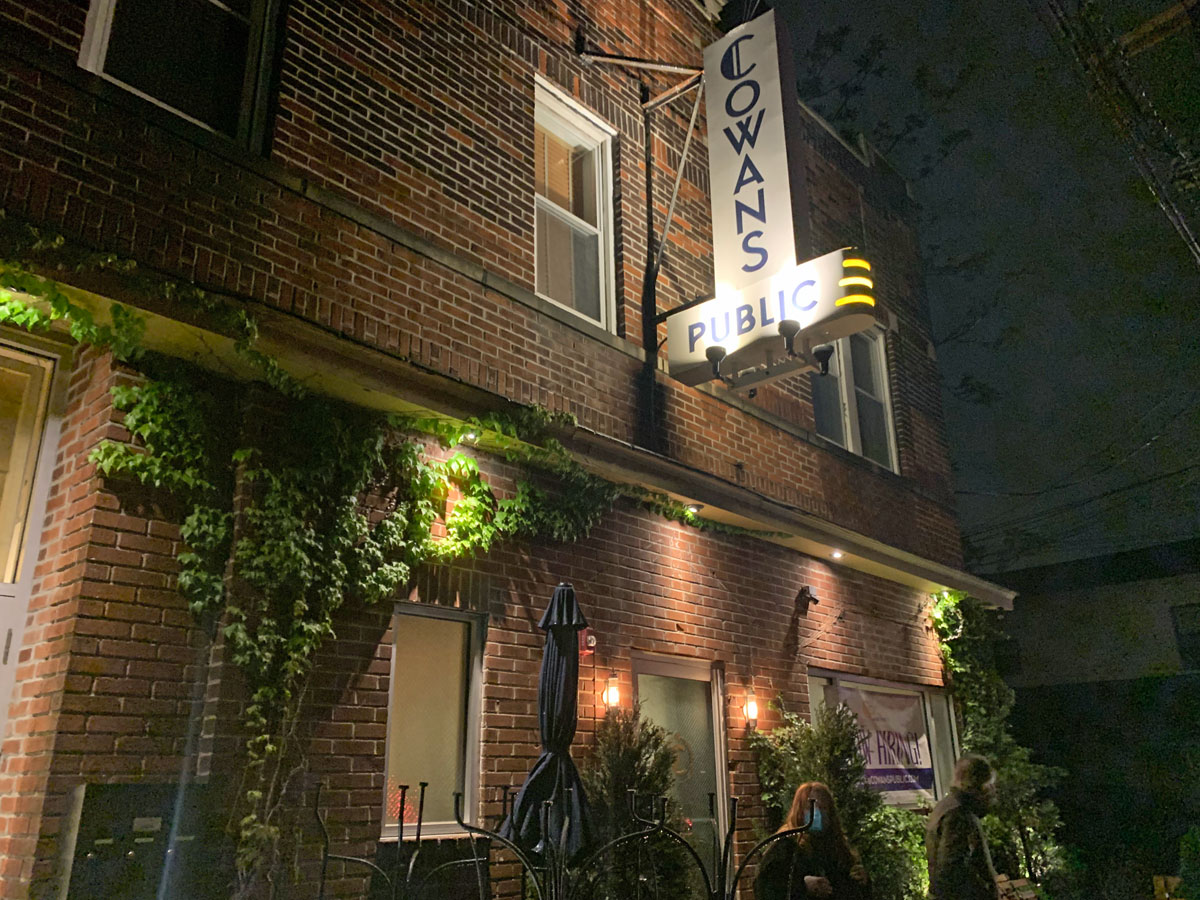 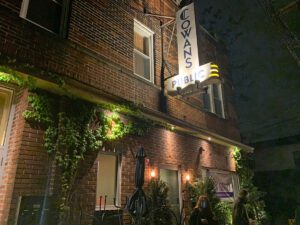 Nutley is not the first town one thinks about when they think of “cool.” Mostly they think about a racist pool club incident back in 2002. Or like old people sitting on a stoop or something. But Cowan’s Public makes its attempt to class up the ‘hood by bringing that speakeasy life to a town just aching to move into… Well, back in time to the future. Or whatever. Point is, they serve good cocktails in what passes for a modern setting, so that’s a step in the right direction.

Located in a non-descript brick building on a non-descript block in a non-descript part of town, Cowan’s presents like a place that just might be more of an asbestos liability than anything else. Parking is downright nonexistent, and the night we went there I think the sidewalk outside may have crumbled into the gutter from the constant downpour of the day. Painting a lovely picture, so far, eh? Well, luckily you can’t judge a book by its dreary-ass cover.

You step inside and are immediately struck by how small it is inside. According to their website, this place has been a pub since 1934, but it feels more like what it most likely is, which is a converted house built in the 20s. So it’s almost as if you’re stepping into the living room — albeit a slightly blown-out version — of one of the dinky two-family homes in the neighborhood. There’s a large, curved art deco bar that takes up probably half of the space, a few high-tops and probably five-to-seven tables against the wall across from the bar. There’s even a fireplace to give it that truly homey vibe. Not sure if it’s original to the space, but odds are it is. The whole thing is fussily period, owing most of its style to the 1920s and 30s when men wore hats, gals wore those flapper dresses and people poured booze behind closed doors. There are a few odd touches, including what seems to be an intentionally water-stained tin ceiling and some crumbly plaster around the fireplace, but they do manage to make it feel pretty cozy.

Like a lot of these types of gastropub-type places, the appetizers are sometimes the biggest food draw. Besides the cocktails, of course. My Manhattan was professionally and expertly made. It was quite good. But the appetizers — in this case labeled “shares” — could probably sub for a meal. Like you could sit and have a couple drinks and a couple orders of the soft pretzel — which was amazing — and be satiated. I mean there are fifteen things on the shares menu, from burrata to tacos to fried pickles and only five main courses. Sure, there are six things on the sandwich menu, but you kind of get the idea that they expect most folks to come in and eat at this joint more like a bar/pub than a restaurant. Which is totally fine.

That said, our dinners were actually pretty decent. Between the six of us, we had fish & chips, burgers, a fried chicken sandwich and a couple specials. All of it was professionally prepared and tasty. The patrons all seemed to be having a pretty good time. Mainly based on their volume level. It’s an intimate experience, but not what I’d say is a joint you’d want to go to have a quiet, private conversation. It feels somewhat communal, despite not being communal seating. Which, again, is just fine. All in all, we were happy with our experience both service and food-wise, and especially when it came to our drinks. Because, ultimately, you come to a speakeasy to drink hooch. And that they have down to a science.