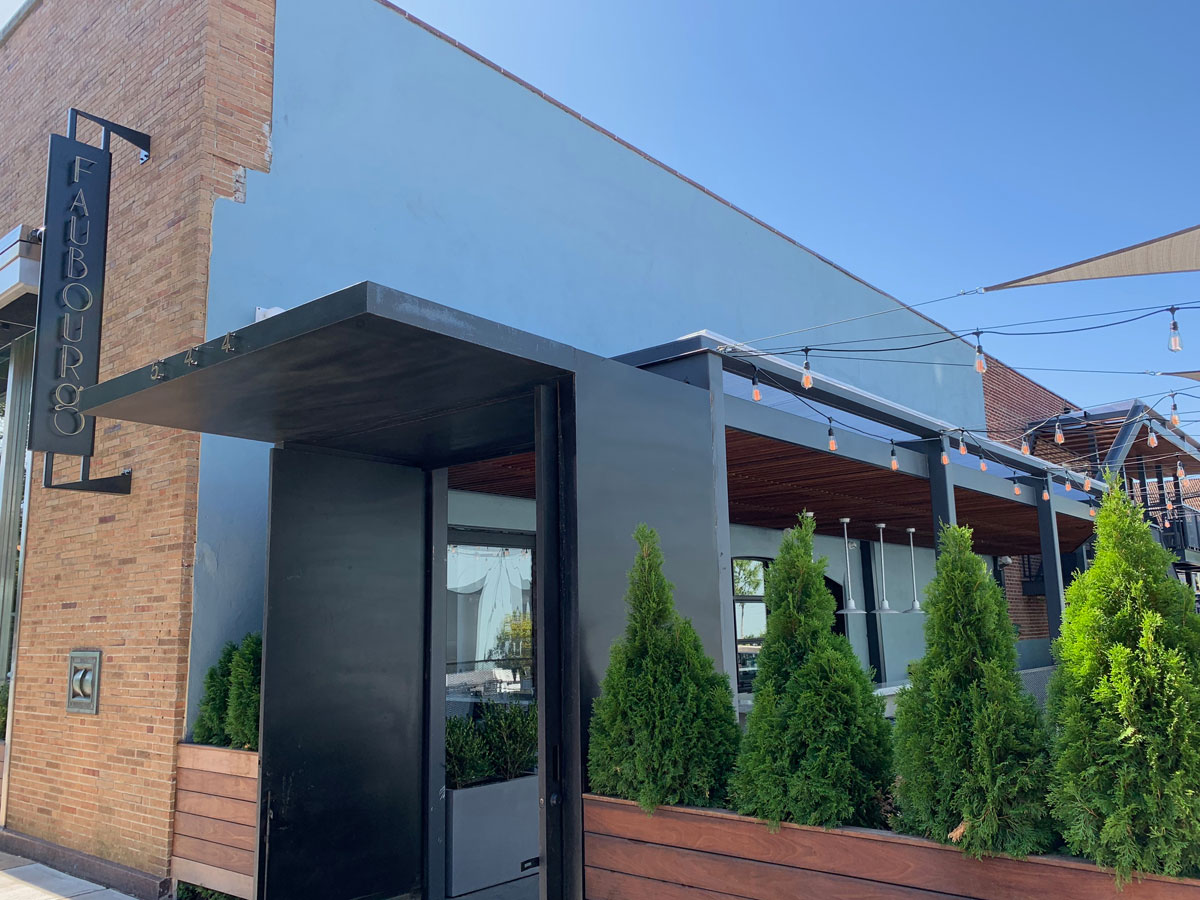 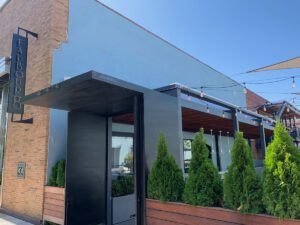 The hope is that Bloomfield Ave. in Montclair will eventually be filled with restaurants opened by former Manhattan chefs. With lower rents and arguably better parking (hah!), it totally makes sense for sous-chefs and whatnot from fancy-pants joints in the city to move our here to serve grub to people who mostly commute to the city every day anyway.

The hope here is that this new flagship French eatery and bar, Faubourg, will lead the march west to the friendly confines of urban-suburban New Jersey. After all, if Montclair can get two Daniel Baloud alumns to build out and start this place, just think who else we can draw. Come one, come all. All you Collicchios and David Changs, Thomas Kellers and Éric Riperts. We have plenty of open storefronts and abandoned restaurant spaces for you to settle into. Way too many, in fact.

But for now we have this place. This restaurant that takes over a space that was clearly once a bank and then the weird movie theater I vaguely remember and then the lighting store, wood slab store and, of course, the Halloween pop-up store. This is way better. They’ve even cleaned up the abandoned alley next to it to create a cool outdoor bar space with lots of seating, firepits and romantic lighting. The double-height indoor space creates a wonderfully open feel inside the restaurant, but they may have to figure out how to temper some of the noise when this place really takes off and is packed with loud, drunk people. The decor is relatively understated in the relatively austere Restoration Hardware kind of way (with a little West Elm softness mixed in). I would have liked a tiny bit more personality in the muted design, but the space kind of speaks for itself.

Now, we’re pretty early on in the process, so some of these issues will most likely be worked out as they get more seasoned, but… We had eight o’clock reservations and we didn’t get out of there until ten-thirty. It wasn’t because our seating was delayed — we sat right at eight — but there were long stretches during the meal where our server went AWOL or seemingly lost his way form the kitchen to our booth on the second floor. Luckily we didn’t have anywhere to be, but the timing was certainly off and the service more than spotty. The first couple bottles of water we got were warm, the replacements only to appear about ninety minutes in, the wine was a whole thing and they ran out of a desert we ordered, which we didn’t know for quite a while. But, again, our server seemed new and I’m sure this will improve with time.

So, the food. It’s French. And French food is good because it’s flavorful and absolutely kills it with sauces. Sauces are the shit. Like food without sauce (all those farm-to-table joints) just seems to not be trying hard enough. Sauce. Yay.

There were four of us and we seemingly spent the first half hour of our meal confusing the shit out of the waiter with our requests to taste a few of the wines. They were very nice about it, but seemed unaware of what was what. When we finally settled on wines, they were decent. Granted, most restaurants in Montclair are BYOB, so this adds to the price, but it’s convenient. We did a couple appetizers. Gougères comté, which is basically a popover-like cheese puff. And barbajuans with swiss chard and ricotta, which are basically little fried raviolis. Both were interesting in their own way and were pretty tasty. I do feel like the puffs would have been good stuffed with vanilla ice cream and covered in chocolate sauce, but I’m a heathen.

We all ordered different mains. I did the salmon and sorel with wild rice and radishes. Ms. Hipster did the steak with au poivre sauce and our friends did the coq au vin with späetzle and the halibut with ratatouille. My salmon was perfectly cooked and the sauce kicked ass. I mistakenly thought sorel was going to be mushroom, but apparently this is a classic French dish and sorel is some sort of plant. I’m not a sophisticate, but I know good food when I taste it. The only thing I could say is that I wish the wild rice was a little more wild. The Ms.’ steak was cooked to a perfect medium rare and, once again, the pepper sauce made the day. I think the winner, though, based on my buddy’s reaction, was the coq au vin. He finished and was already saying he was ready to come back to get it again. So at least I know what I’m ordering next time.

I think they took a little pity on us having numbed our tailbones for 2.5 hours and delivered us a comp bowl of amazing madeleines. Again, almost worth the trip alone. It’s a shame our espresso didn’t show up until about 15 minutes later, because that would have been a perfect capper. Despite the long waits and whatever the opposite of “French service” is (as the servers put each meal down in the wrong spot and we did that fun thing where you try to hand very hot plates to one another) we will definitely be back to enjoy what is currently the jewel in the Montclair culinary crown. At $75-per-person (including wine) it’s not cheap, but if you break that down based on the time we spent there, you’re only paying fifty cents per minute. Such a deal.