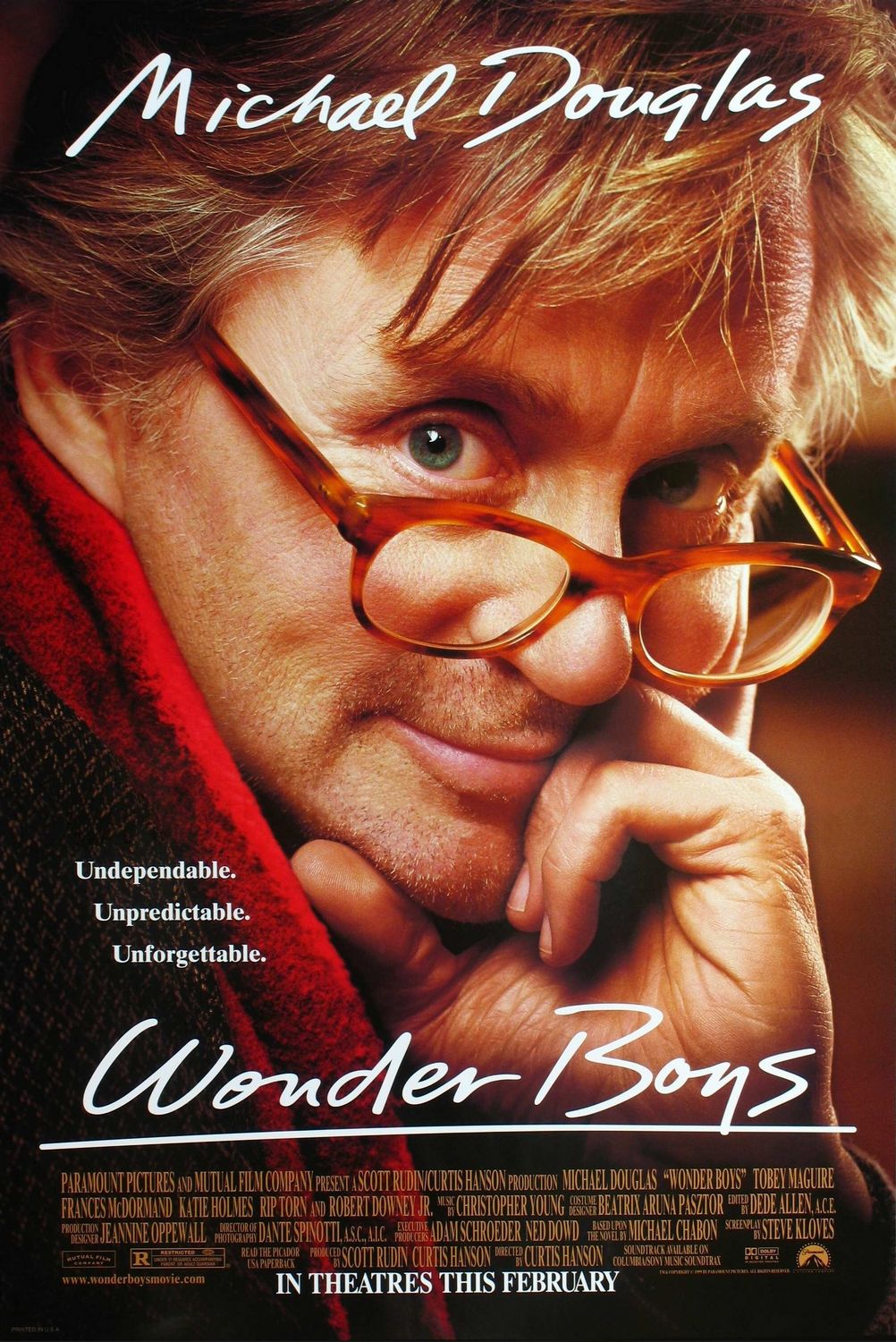 After I finished reading Wonder Boys I signed onto IMDB to see when the movie would be coming out. No, I didn’t know a film was actually in production, but the book read like a movie script and just begged to be turned into something visual. I just have a hunch the thing was being made before the ink even dried on Chabon’s publishing contract. (His follow up to Wonder Boys, The Amazing Adventures of Kavalier & Clay just won the Pulitzer Prize for fiction.) The book/film combined great characters, commentary, slapstick, etc. into a cohesive story about what it means to be a writer and a human being who is honest about his emotions.

Anyway, the story revolves around the life of Grady Tripp, a burned out professor at a Pittsburgh liberal arts college who once had a huge hit novel, but hasn’t produced anything in seven years. The book describes Grady as this disheveled, fat mess who is constantly stoned, drunk and philandering. For some reason, I pictured Nick Nolte (he plays disheveled well.) When I read that Michael Douglas would be playing Grady, I didn’t think he could pull it off. The guy’s not fat, he’s not sloppy, and he usually plays the guy in the suit with slicked-back hair. Boy was I wrong. Yes, he’s still not that fat, but man does he capture the essence of the character. He’s this guy who knows exactly what he is doing to himself, but has lost any desire to do anything about it. Is it the drugs? Is it the three failed marriages? (The movie starts with his third wife leaving him.) Is it writer’s block?

We soon learn that he is anything but blocked. His attempt at a follow up to his original novel, The Arsonist’s Daughter, has ballooned to something like 2,600 pages, with no end in sight. To add pressure to the situation, Grady’s agent, Terry Crabtree (Downey Jr.), is coming to town for the annual Wordfest (some writer’s symposium at the college) and wants to see a finished product. On top of this, the chancellor (McDormand) is pregnant with his child, one of his students, James Leer (Maguire), has just shot the chancellor’s husband’s dog in front of him, and he is suffering from mysterious fainting spells. Add in a frisky coed (Katie Holmes) who rents a room in his house, a transvestite who leaves his tuba in Grady’s trunk and a crazed dude named Vernon Hardapple who thinks Grady stole his car, and wackiness most certainly ensues.

The most interesting relationship in the movie is between James and Grady. James is talented young writer who has some serious issues, including a morbid fascination with celebrity suicides, a problem with compulsive lying, and a streak of kleptomania. Grady’s emotions have been dulled by years of smoking pot and feeling sorry for himself. He sees something in James that sparks in him that passion he once had. It’s way too complicated to explain everything, but the relationship between the character’s progress and everyone and everything becomes intertwined. We keep returning to the relationship between Grady and the chancellor. Is this a man capable of love or compassion? Does she want to leave her husband and have a baby with a man who can’t commit to anything, including his own vision?

McDormand is great as usual, by the way. And I can’t wait to see Maguire as Peter Parker. He’s one of those actors who can really take a subtle approach to things and still convey an awful lot of emotion. Rip Torn is still one of the funniest guys around. Watching him on the The Larry Sanders Show, you almost had to laugh every time the guy opened his mouth. In this movie, as Grady’s friendly competition, he really shines. Katie Holmes is the eye candy in a role that is small, but pivotal in furthering the character development of Grady. Curtis Hanson does a really decent job with the direction, constantly creating scenes in which Douglas looks like an old dog left out in the rain. He is obviously choosing his projects carefully of late after directing such wonderful films as Loosin’ It, The Bedroom Window (with Steve Guttenburg), and The River Wild. After this movie and L.A. Confidential, his stock has got to be skyrocketing. Overall, the movie was smart, well written, entertaining and thought provoking. I don’t know about you, but that’s kinda why I go to the movies.