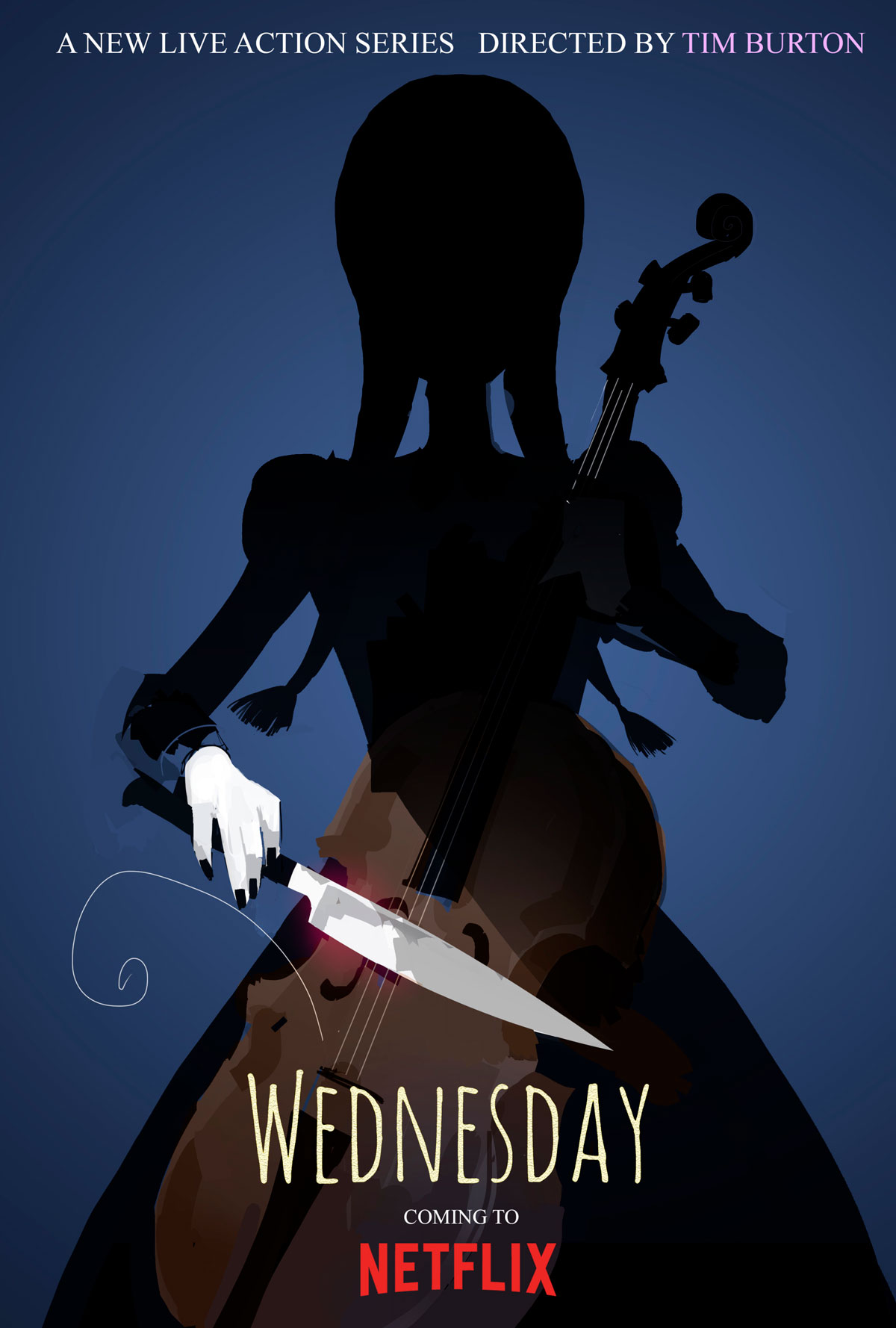 On paper Wednesday makes a ton of sense. It’s like this weird amalgam of everything the last three-and-a-half generations can feel something about. Those damned Boomers probably remember the first run of the original 1964 The Addams Family series as teens or young adults. Then the preponderance of that same series ran in syndication throughout our Gen-X childhoods. Usually paired with The Munsters, which also debuted in ’64. Then the Millennials got The Addams Family and Addams Family Values as kids either in the theater in 1991 and 1993, or over and over again in their parent’s living room on cable and DVD. Stupid Scott Rudin. And, of course, now we have this show for the Gen Zs, starring Disney Channel star Jenna Ortega from Stuck in the Middle. Sadly, a show I’ve seen with Hipster Jr. Jr. more times than I care to admit. And what Gen-Z kid can resist the throw-back, 90s-style, goth-emo, Hot Topic aesthetic of the Wednesday character? Answer: none.

In other words, it’s a generational entertainment. If you factor in the nostalgia of the show and the man behind the show itself, Tim Burton. You know, back before he was tagged as problematic for casting exactly zero actors of color in any of his films ever. But what person’s mind, who was alive in the late 80s and early 90s, doesn’t jump, in a nostalgic way, to movies like Beetle juice and Edward Scissorhands? Films that feel of a piece with the themes and aesthetics of this series. Burton just feels like the perfect avatar for something like this. Dark, humorous, wondrous. You know, all those adjectives that kind of sum up the magical proposal of his work and what this show purports to be.

Which raises the question: does it fulfill the promise? Welp, first we have to understand the premise, I suppose. And it’s a super-simple one. Wednesday Addams is a misfit. She’s this dark, seemingly dysfunctional soul who cannot survive in the day-to-day world that is typical high school. She seemingly a nihilist. She doesn’t suffer fools, and clearly cannot understand why people are smiling and goofing around. It’s not that she’s shunned and weeping in a corner, however. She’s an incredibly self-assured teen. Confident and clear in her purpose. Which is essentially to be left alone to pursue the writing of her book and the enjoyment of whatever mayhem may befall her classmates. But when she sticks piranhas in the school swimming pool to get back at some water polo players for stuffing her little brother in a locker, and one of the boys loses a testicle… Well, it’s off to the misfit toy boarding school, Nevermore Academy, with her. The same said misfit boarding school where her folks, Morticia (Catherine Zeta-Jones) and Gomez (Luis Guzmán) went. But, the question becomes, even in a school of misfits, can she be an even bigger one? Sort of.

Because this isn’t what drives the show. Even though the other students are a bunch of vampires, werewolves, sirens, gorgons and other mythical and non-mythical creatures, Wednesday’s goth attitude may be the weirdest thing of all. It’s like Harry Potter, if everyone else was a wizard and Harry was just a cranky teen with a penchant for anarchic bloodshed. But before this can become the central theme of the show, we are brought into a mystery. And Wednesday — who shows no previous care for anyone or anything — becomes obsessed with solving said mystery. Maybe because it involves murder, and that’s kind of her thing? But, yeah, it’s unclear why she becomes goth Nancy Drew, but that’s what the show turns into. Which is odd. But I suppose just having her going around sneering and quipping about how other kids are stupid for eight episodes wouldn’t have made for much of a show?

My issue with all of this is that I honestly don’t care about the murder mystery. And because of this, I found it kind of confusing and not particularly compelling. They jump into it way too early in the series, which interrupts our ability to establish some of the characters as anything more than barriers or assistance in helping Wednesday get to the bottom of the murder. A murder that she insists was perpetrated by a monster. A monster we get to see at one point — and ridiculously resembles one of Burton’s earlier creations from Pee-wee’s Big Adventure, Large Marge. Apparently Netflix couldn’t or wouldn’t pay up for the SFX A-team. It’s really bad. But I guess goofy enough that you can almost chalk it up as intentional. Almost, but not quite. But besides the questionable graphic work — although Thing looks great — I just couldn’t get into the Encyclopedia Brown of it all. Wednesday with her red string board and this and that evil book and the town pilgrim dude and whatnot. It’s all too Ghostbusters: Afterlife lore for me. Why can’t it just be Heathers, but like spooky Heathers?

Despite my petty complaints, there are positives here. At first I was a little out on Jenna Ortega’s flat affectation and stone-faced performance, but it grew on me over time. I think I realized it was more the writing than the acting. In fact, by the end I could see why she’s a bit of a phenom. Granted, the series — and here I go complaining again — actually sidelines her performance as the finale ramps up in favor of the usual CGI nonsense. But she manages to push through. Her roommate, Enid Sinclair (Emma Myers), also provides some spark in an otherwise kind of ho-hum cast of young people. In fact, the dudes in general are kind of a drag. Apparently they didn’t cast for charisma or menace or anything other than beta male energy. The adults, of course, are where they put their effort. With mixed results. The imposing Gwendoline Christie, as the school’s principal, is great. She looks especially impressive next to Ortega, who seemingly runs about 4’8″. Zeta-Jones and Guzmán are good, but given very little screen time. And then there’s Christina Ricci and her weird, fake wig. Poor Christina. In fact, poor us for having to put up with her stiff, uninspired role and performance. It’s not as if it’s not obvious that putting her in the show will garner her some sort of involvement in the mystery, despite her character coming off as a vanilla nothing the whole series. Like putting a recognizable celeb on Law & Order guaranteed they had some hand in the crime. Obvious, and a pretty poor choice. She’s not good.

Anyhow, I know this show isn’t necessarily for me beyond the nostalgia angle of it. And there are elements of it that are decent. But it did the thing that so many films and shows before it have done: they lean into the need to have a big bad that creates all sorts of chaotic nonsense that completely detracts from the story we all actually want. We want to see the development of Wednesday. We want her to hug her damned roommate. We want her to realize all these boys are just distractions, and are, in fact, kinda lame. We don’t need to see her fight a pilgrim ghost or whatever the hell is going on at the end of this season. It’s the same mistake Marvel makes with their shows. The giant CGI battle is for them, not for us. We don’t care about that shit. The show is called Wednesday, not Scooby-Doo Fights the Zombie Colonizer. It’s dumb, and a distraction from the core of what we’re looking for here. But I guess I’m an adult watching a show made for teens, so I should just shut up. Of course, I’m still hoping that when I’m made to watch season two with Hipster Jr. Jr., that they’ll focus more on Wednesday the character and less on their version of Hogwarts and what visual garbage they can throw at the screen.