Here’s Mr. Hipster in October 1979. He just took a ball to the face and came whimpering over to the sideline with a bloody nose. Luckily Arthur Fonzarelli was there to hand him an ice pack and a Tree Top apple juice, muss his hair and send him back with a thumbs up and a “heeey!” (that last part probably never happened, but it makes the story better.) These kinds of things happen all the time when you grow up in LA — Mr. Hipster swears.

The scariest thing about the photo isn’t the fact that there are generous celebs walking the sidelines of seven-year-old’s soccer games, but the fact that the kid in the purple jersey is the same age as Mr. Hipster. Damn he was a tiny child. 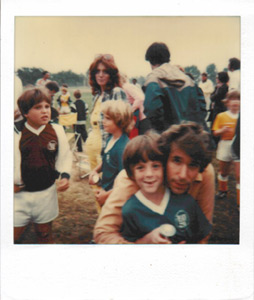