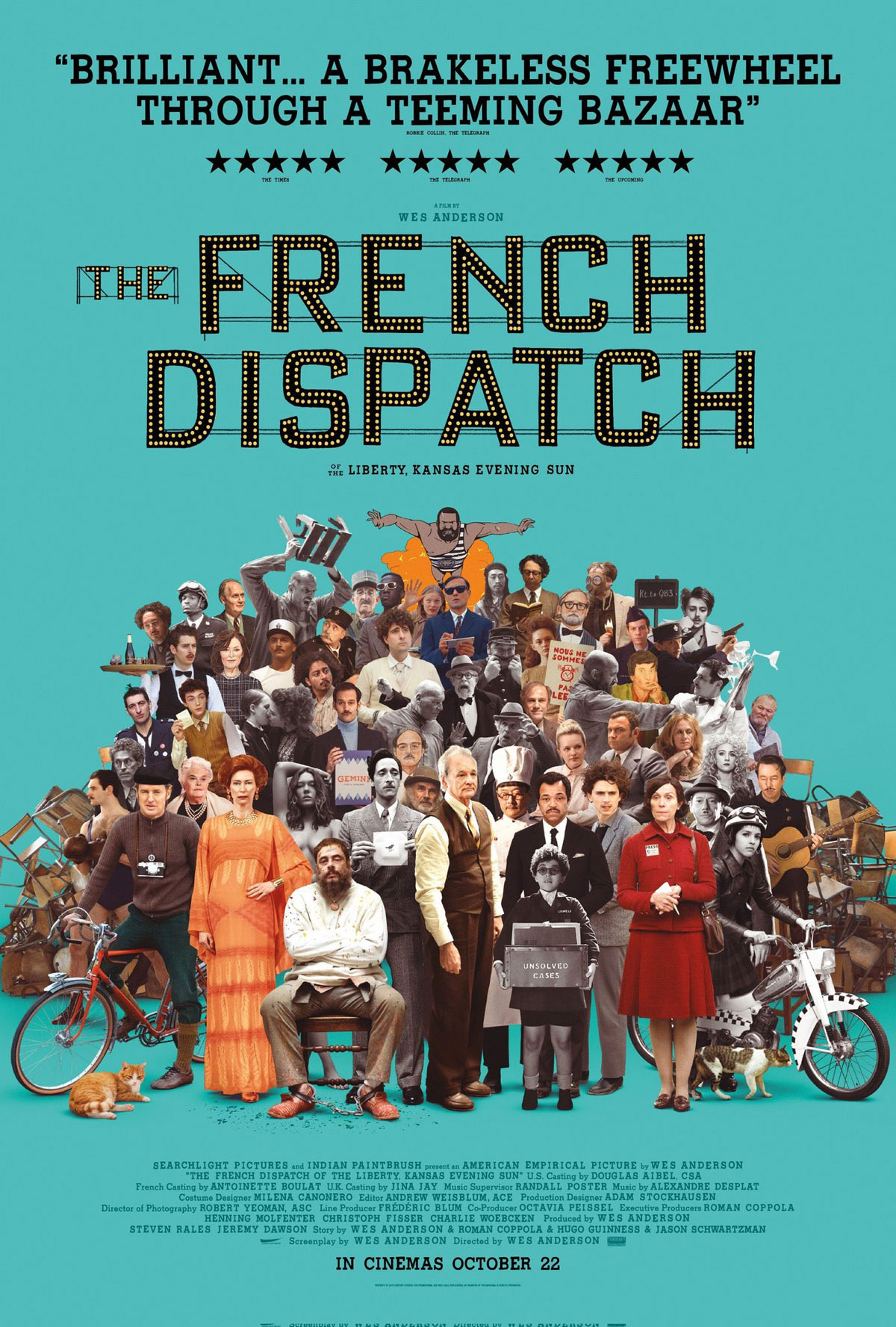 Even more than most Wes Anderson movies, The French Dispatch is a dollhouse. A dainty, little twee dollhouse of a movie that feels like one of those plays with the paper puppets… Ok, I’m mixing my metaphors, but you get the idea. It’s intricate and controlled and, frankly, a little boring. I’ve watched Anderson do his thing for years. And while I always appreciate his mastery of the craft, I question, sometimes, his ability to transcend the art and make entertainment. Even in a movie like this with about eight billion famous actors, he moves them around like Barbies and gives them the Johnny Depp unreality lens that makes the whole thing seem like an off-Broadway experimental thing.

Not to mention that The French Dispatch is technically an anthology. A grouping of very loosely interrelated short stories set in the same world. Perhaps Anderson was inspired by the Coen Brothers’ attempt at the same with The Ballad of Buster Scruggs. Either way, I’m not sure I love the form. The movie is an issue of The New Yorker come to life. And, let me tell you as a person with a stack of unread New Yorkers in his beside table, it can be a bit high-minded, overly-long and esoteric to the point of what-the-fuckness. This film looks to bring those stories to life, while throwing love toward all manner of intelligent journalism. The audience for this — I imagine — is incredibly narrow. It’s an art house film with a killer Hollywood cast. All of whom are playing these intricate little characters of varying degrees of weirdness. A trick only Anderson can pull off.

I think my issue is a pretty prevalent one in my not-my-thing complaints over the years. I just don’t like “characters.” What does this mean? Well, first, like anything that was first concepted on SNL. And then any of those lame You Don’t Mess with the Zohan and — gasp! — Zoolander (a film I’ve actually never seen because of my aversion to this stuff) type movies. And while this movie isn’t those movies in the slightest, it gives me those character-y vibes. But instead of idiocy, prosthetics and bad facial hair, Anderson brings that heightened twitchiness and stylized manner of speaking of oldy-time films. The hyper-literate dialogue and just the whole controlled, showy aspect of it felt more interested in the gimmick than it was in telling a decent story. Honestly, maybe I wasn’t in the right mindset when I watched it and just didn’t get the connection between the stories or the overarching concept of this French outlet of a Kansas newspaper. It’s odd and a little confusing. In fact, the whole title of the film is actually The French Dispatch of the Liberty, Kansas Evening Sun. Weird, right?

Anyhow, this is a quirky, little film. Anderson does quirk a lot. And that’s fine, as long as you imbue it with some heart. Some warmth. Some protagonist in which you can feel the love. That’s what his earlier films had. Even though he’s a total cad, you can feel the proper love in Royal Tenenbaum. I mean, you can’t really beat that movie or the characters therein. Maybe it is the nature of the anthology, but there is less love here than there is the desire to visually dazzle. And, sure, there are some seriously creative looks. It’s fun to watch stars dip in and out. The whole thing is incredibly professional. In fact, it’s sooooo Anderson that at times it feels like someone doing a parody of Anderson. Twee to the nth. Notice I haven’t talked about the narrative(s) at all? Well, because they’re kind of inconsequential. This is a treat for the eyes, not for the brain. I have a vague notion of what was going on. But I didn’t really care. The “plot” was a means to and end of just putting fun visuals on the screen. Nothing more, really. And sometimes that’s fine. But at the end of the day, it’s certainly not the most satisfying experience for those of us hoping to get a little deeper with our moviegoing experience.