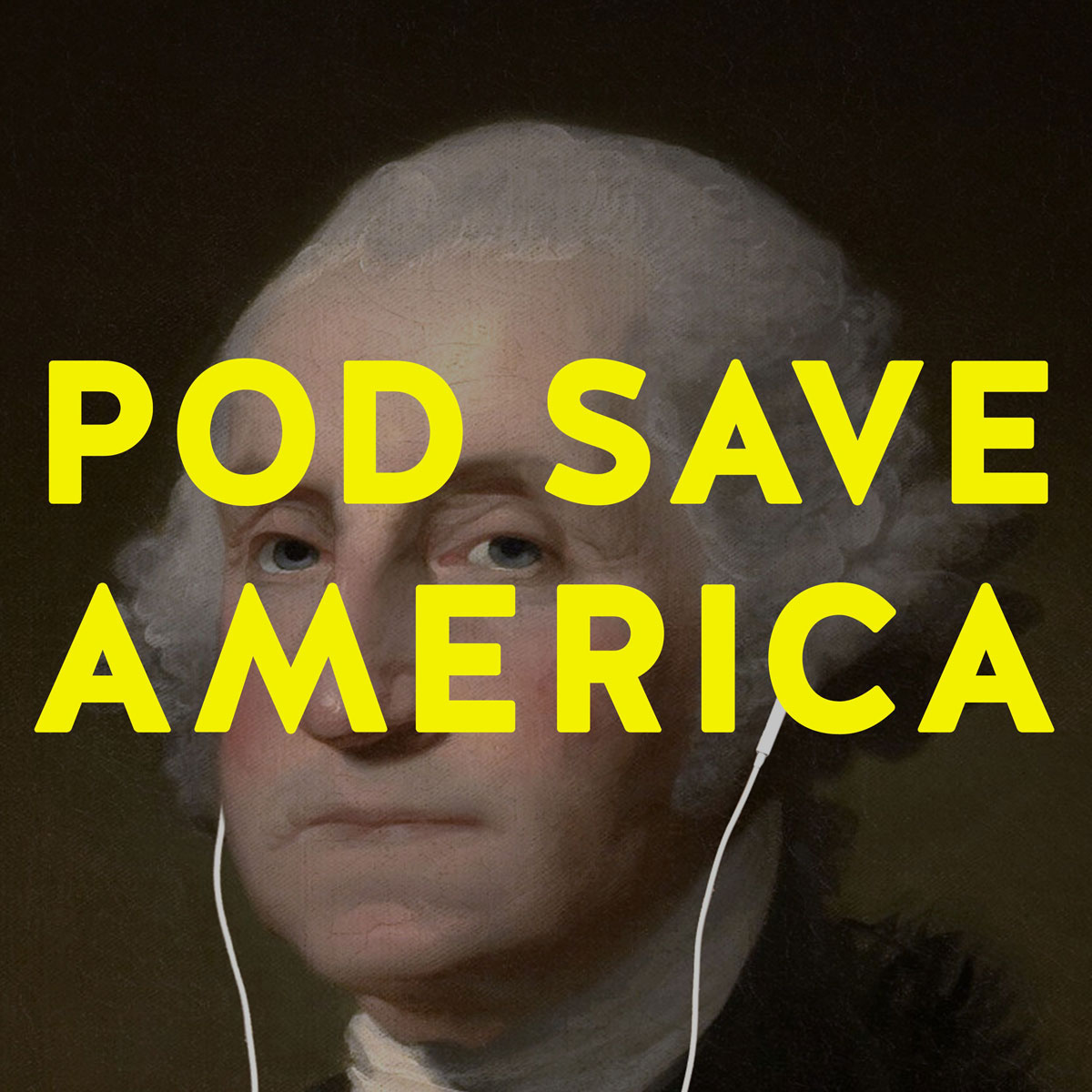 I generally try to avoid politics on this site. My Twitter is a different story, but on the site I try not to tip my hat which way I lean. Try, mind you, not succeed necessarily. Well, I guess this is my coming out party as a lefty. You got me. Or maybe I’m just listening to this podcast as oppo research? You’ll never know!

Pod Save America was originally another pun-named pod called Keepin’ it 1600 over on Bill Simmons’ The Ringer network. That originally started up during the 2016 primaries and cut over to their brand-spanking-new network, Crooked Media, in January 2017 specifically formed to house the new podcast, along with new pod-based content. The pod was and is purely political in nature and is hosted by a group of former John Kerry, Obama and Clinton staffers; Jon Favreau, Tommy Vietor, Jon Lovett and Dan Pfeiffer. Besides the fact two of them are named Jon, they are all guys and they are all white. It’s funny considering how often they — and everyone else on the left — derides Fox and all the other right-wing shitshows for being filled with lots and lots of white folks and little else. They are definitely self-aware enough to realize this and sometimes mention it, but it is one glaring thing that strikes me every time I listen to the pod. Being both gay and Jewish, I suppose Jon Lovett provides “diversity,” but it’s definitely a room full of similar voices. But I suppose that with the demise of Air America several administrations ago, we have little else in the way of outwardly progressive radio-like content out there, so we’ll take it where we can get it.

That said, I’m just giving them crap, which is a thing people on the left seem to be able to take way better than those on the right — despite being called snowflakes for an entire cycle. The pod definitely has its liberal bona fides, but it has taken some time to find its footing over the past couple of years. They toyed with different formats and kind of played with their mission statement. Do they push progressive agendas? Do they act as the missing voice in a media that is increasingly pressured to do “both sides” stories? Do they act as a virtual organizer, getting folks to the polls and encouraging political participation? The answer turned out to be a lot that stuff, but it’s mostly a channel that on a weekly basis talks about what a giant fucking idiot our president is. It’s like the ESPN highlights of stupidity as they go over all the nonsense of the week (there are two pods a week) and usually do take-downs and smart analysis of what it will and won’t mean.

Now, I sat through all of the analysis on their former pod, predicting the 2016 horserace. Like many others, it was almost entirely wrong. This pod has become a bit of a mea culpa. They don’t handicap the races anymore and say as much when pressed. They talk about the candidates and their policies. They talk about the administration and their policies. They also talk about a lot of their awfulness, which is something they can’t seem to avoid no matter what, but they always try to steer the conversation back to the positive messages they want to push. But with cussing and whatnot. Are they always successful in staying out of the mud? Not at all. But if we wanted measured analysis and PG-rated words, we’d watch MSNBC. They articulate a lot of the anger we feel each and every day that our country has been hijacked by a guy who was a local joke for years as he blundered through appearances on Letterman and Stern and graced the covers of NYC tabloid papers (almost always in a negative light). Like us, they are incredulous because it’s absurd beyond belief that this is our reality. It’s like my inner-voice, but way smarter and more informed.

The gang does often have candidates on during the election season, but I’m less interested in hearing what are mostly their scripted answers to relatively softball questions than I am the interactions between the guys. And, honestly, an hour of bitching about Trump is cathartic in a way little else is. I’m not certain what will happen once he is out of office, but I suppose that’s on them to figure out. One other element of the pod is their commercial reads. Normally those in-pod advertisements about razors and bed sheets and cash apps and stamps.com are just boring events, but these guys always put a twist on them, riffing about any number of things. They’re clearly driven crazy by the shitty copywriting the companies send them, so they tend to just ignore it, or comment directly on it in order to entertain themselves more so than to entertaining us. For a long while I actually listened to the reads because they were usually pretty funny, but I eventually discovered the fifteen-second advance thing on my phone and use it liberally. I am curious, however, how they manage to hold onto their sponsors whose people and sometimes their products they seem to openly ridicule. Whatever, they’re getting paid and got a limited HBO run out of it, so they’re doing something right. Or left, I guess.