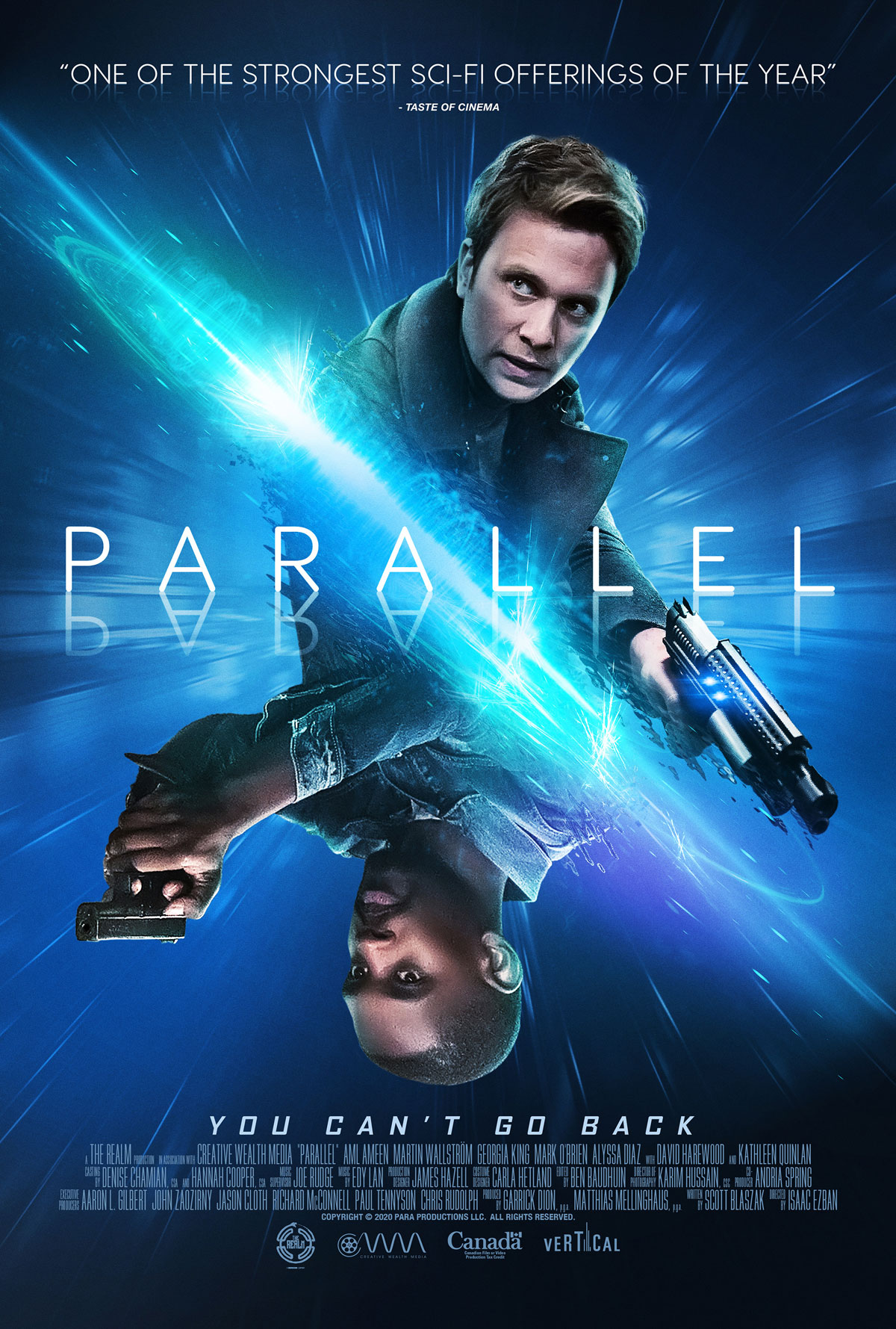 It seems I will watch anything these days with a time travel or multiverse bent. It’s almost like a masochistic challenge to myself to see how much is too much. Because, after Tenet both broke my brain and bored the crap out of it at the same time, this is the perfect chaser if you want to get back to neutral on the genre. Yes, Parallel, is the rare innocuous multiverse movie that doesn’t aim to tax your understanding, make you question your existence or basically confuse the fuck out of you. Which I know isn’t a ringing endorsement, but sometimes a sci-fi flick with just enough to keep it interesting is the palate cleanser you need.

Let’s get this straight: some of the side-effects of creating a multiverse movie that won’t cost you every last brain cell is cutting corners. And there are plot holes galore in this thing. There’s definitely a “fuck it, details are for suckers” attitude about the whole thing. The entire endeavor, in fact, lacks seriousness in an oddball way. Like they’re trying to make a sociological point, but ignore serious inconsistencies and add in goofy shit for no apparent reason. But, like I said, I put aside all my usual complaints, nit-picks and foibles and just went with it. Because, like I said, they weren’t really trying that hard to make everything hang together.

First, the plot. Well… I feel like someone watched Flatliners and was like, “Well, they already remade that shit, so let’s use the group-of-friends-turn-on-each-other thing, but make it less about the afterlife and more about the multiverse.” Yeah, it’s that, I guess. So, these friends apparently develop apps together and live in a rented house were a woman mysteriously disappeared two years prior. Spoooooky! Eventually they uncover the method of her vanishing: a mirror in a hidden attic that leads to the multiverse! Now I said I wouldn’t harp on plot holes, but this attic is large. Like run-the-length-of-the-house large. From outside the house, there is absolutely no way they — and everyone else, including the police who searched for the missing woman — wouldn’t realize there was an entire floor up there. It’s physically impossible. But I’m not gonna harp on it. But, man, I just can’t leave this alone… Where the hell did this magical universe-jumping mirror come from? Why is it in this random attic in what appears to be… Canada? Nope, they’re not gonna tell us anything about that. Just go with it. Narnia style.

The friends realize that the mirror dilates time. Which means that time runs much faster in whatever universe they step into compared to the home universe they left. So they use this to their advantage to tie up a failure in the beginning of the film to beat their rival to the punch in developing some sort of stupid parking app. They can step through the mirror into a doppelgänger attic in the same house in some other branched universe to develop the app for a few days and step back through to the home universe, where only a short time has passed. So where they only have two days to develop the app in the home universe, the doppelgänger universes give them weeks. Ok, time dilation that’s tied to the movie intro. Fine. Clever.

But then, after this initial victory, the power of the mirror begins to take hold. As you knew it would. It’s the ring. These universes contain doubles of themselves (where they all mysteriously have the same haircuts). But they also contain small differences. In art. In technology. In business. So, greed and weirdness start to seep in. Each time they step through, they’re sent to a random universe, so there’s no telling what will be different. But there is enough each time to bring home to make them rich. They can use the time dilation to bet on sports. They can find things that haven’t been invented in the home universe and bring them back and be world-class innovators. In the case of one character, she can become a famous artist, copying art from another universe in the home universe, claiming them as original. And nobody would be the wiser. The question becomes, how much is too much? Where’s the line? Who’s gonna break. And then who is going to fuck everything up by getting involved with one of the other friends? Sounds a lot like every other movie where, given power, one of the assholes in he group gets too greedy, one man/woman in the group has sex with another and then the greedy one loses his ever-loving mind. Yeah, this is that.

The funny thing is, I totally didn’t hate this thing. Yes, it had more plot holes than I could even count. Yes, the tone was a little all over the place. Yes, the mechanics of the sci-fi it portended to care about were all sorts of screwy. But it was entertaining. It was a distraction I was happy to have. Shit, I 100% intentionally put on this movie with the dull-ass title of Parallel to play in the background while I did other stuff. But damn if I didn’t pay attention and watch it all the way through without pause. Was it high art? No way, dude. Did the director go overboard with his camera swings and whatnot? Barfingly, yes. But, ultimately, did it make for a compelling 90 minutes of dumbness that took my mind off of COVID spikes and Senatorial gridlock and the 37 things on my to-do list that weren’t getting done? It sure did. And sometimes that’s all you need in your multiverse movies.

Sidenote: I’ve come to the conclusion that Swedes make really good bad guys. There’s an uncanny valley thing that goes on with them. You’d swear they’re American, with their perfect accents and whatnot, but there’s always something just on the edge of perception that’s off. And that makes them creepy. Just watch Mr. Robot’s Martin Wallstöm in this film and you’ll see exactly what I’m talking about.