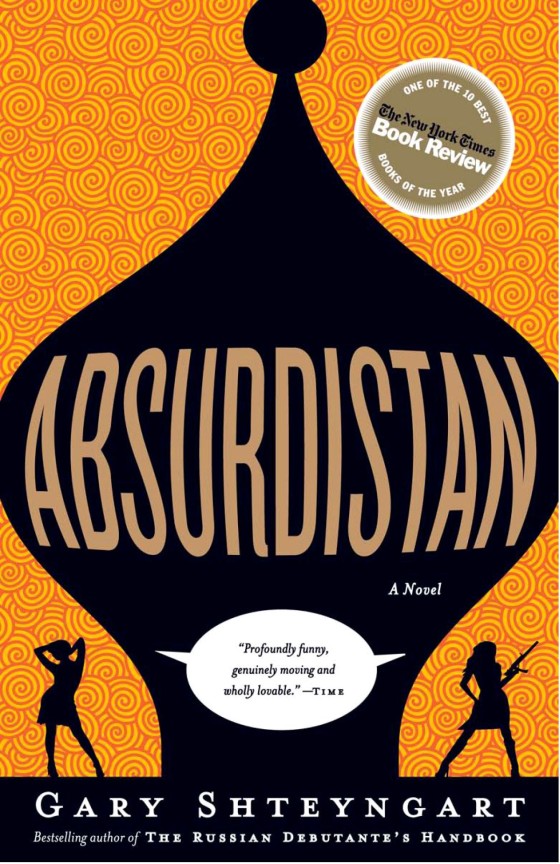 I always go into the reading of absurdist fiction with a skeptical eye. Absurdist in the way that the author uses absurd situations and characters wrapped around a kernel of truth and reality in order to shed light and comment on said known truth. The characters are often oversized, dress funny, have silly accents and make choices and act in a way that you recognize may exist in some arenas, but is amped up and magnified to the point of absurdity and is often mixed with instances of high comedy. The core issue with this approach is that there is a very fragile tipping point that can send characters and situations into sheer silliness and in many ways obscure the serious point at the nougaty center of the narrative. And so goes Absurdistan and my ambivalent feelings about this genre.

I also can’t help but flash back to A Confederacy of Dunces when a book’s main character is corpulent and oddly high minded and oblivious and simple (all in one) in a world of morons. In this case we have Misha Vainberg, Russian Jew, graduate of an American university, son of the 1,238th wealthiest man in Russia and extreme lover of all that is edible. He’s in love with his South Bronx sweetheart, whom he’s sending through Hunter College and hangs in St. Petersburg (Russia, not Florida) at strip clubs and regular clubs with his American college buddy. His goal in life is to get back to his mami in New York and live that American lifestyle. The issue is, his father (now deceased), a Russian dissident turned minor-league Russian mobster ,murdered an American businessman and all visas for the Vainberg family have been revoked.

So Misha goes on an adventure to wend his way back to his American sweetheart. Along with his manservant and best friend he goes to Absurdistan to secure a Belgian passport with an eye to getting the hell out of Russia and eventually making his way back to NYC. What he finds there is a kind of mish-mash of post-Soviet free market and Iraqi George W. Halliburton nonsense. And, of course, being a fictional country, the place is run by complete morons. Yes, yes, I know there are real countries run by morons (some of them closer to home than one might think), but Absurdistan seems to be packed to the gills. They are a country without an identity that claims to pray to God but in fact bows down to Halliburton and its subsidiaries because—ta-da!—they have American currency. Misha gets sucked into the whole thing after securing his Belgian passport, somehow running into guys he knew from college and, after his girl back home hooks up with Gary Shteyngart’s alter ego, Gerry Shteynfarb, and leaves him, he hooks up with one of the country’s leader’s daughters and wackiness ensues. Civil war erupts all because of an offhanded comment Misha makes at a dinner full of Absurdi government folks. Social commentary about US involvement in foreign countries, oil companies, NATO, and religion all get the spotlight in a land of pure idiot genius.

Misha talks a lot about his mutilated penis, which he received when his father had him get himself circumcised as an adult in New York by some Hassids on a bris bus. He talks a lot about eating sturgeon kebabs and his “tits.” He’s a character that is both sympathetic, repulsive, snobbish, bizarre and tortured by an insinuation (or maybe just one I’ve read into the story) that his father, whom he seems to have loved and hated in equal parts, either forced himself on him or did some sort of something to him (other than kill an American so he would never be able to leave him again). I certainly can’t say I loved this book, much in the same way I haven’t loved any of the Tom Robbins books I’ve read, or screwball Adam Sandler movies I’ve seen. Granted, the author manages to connect with his character a bit more and not completely bury him in absurdity, but what felt like a reasonably focused story for the first half of the book (pre trip to Absurdistan) became as confused and narrow a story as the country itself in the second half.