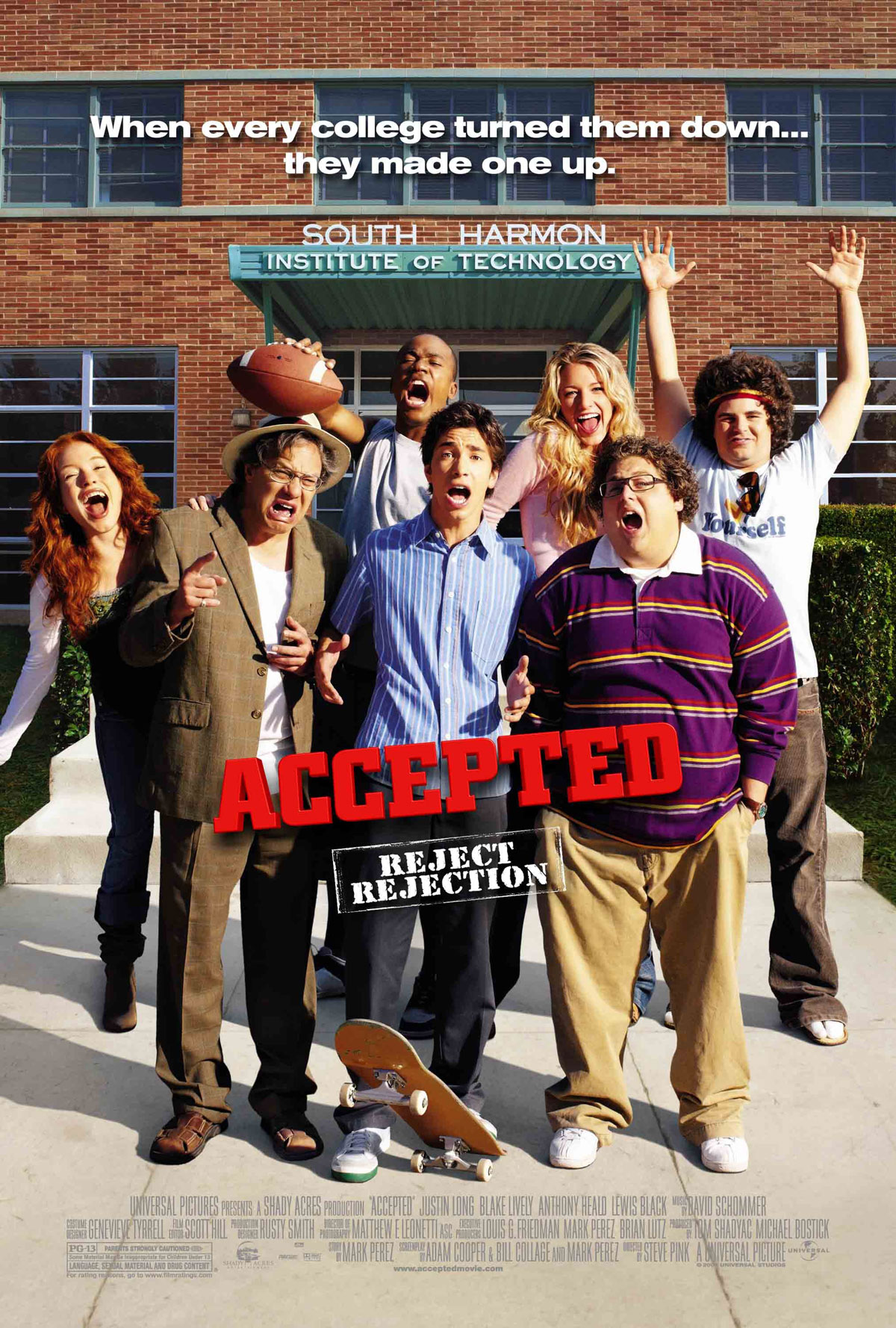 I feel dumber after watching this movie. And, yes, Accepted is really, really fucking dumb. But I, as a human, feel like my IQ dropped at least 45 points after watching this absolute trash heap of a film. The saddest part? It’s not the first time I’ve watched it.

I took a bunch of film theory and criticism classes in college. I understand how that might be a shock to the twos of you who frequent this site. But one of my professors did an amazing breakdown of Animal House. A film that this one clearly aspires to be. It’s been a really long time, but I recall him making the argument that the team of Lampoon writers — all of whom went to Harvard — purposely made the dumbasses and morons the heroes of the movie in order to encourage their erstwhile Ivy competition to adopt the loser mentality after seeing that they are much more fun than the sweater set in order to thin the herd that would otherwise come at them professionally. Or something like that.

I used to watch a show back in the early 2000s called Ed. Justin Long wasn’t the lead in that show (he wasn’t Ed), but he was in every episode and was a secondary character who sometimes took the spotlight. I liked the show. It was heartwarming and funny. In fact, Long’s jittery teen/young adult character was, in my recollection, pretty decent. And then he landed those “Get a Mac” Apple ads with John Hodgeman in 2006 (the same year this movie came out) and it seems the world turned on the dude. He was “smart-mouthed” and “bratty.” He was everything that was wrong with the young generation. He became in most people’s eyes the embodiment of the douchenozzle hipster. Even though Justin Long, the person, is in fact a late Gen Xer or Xennial and not a dreaded Millennial, the generation who would go on to be vilified in much the same way Long was perceived. At least that’s what I attribute to his weird fall from social grace. Like every time people would see his face, they’d be all “Oh, man, that kid. He’s so obnoxious!”

Thing is, you can see why people kind of hate him in this movie. His character — a high school senior — is supposed to be a Ferris Bueller type. A kid who is too smart for his own good and talks his way out of things with his disarming charm. I guess. But when he’s too cocky and gets rejected from every college he applies to, he needs to think fast. His name is Bartleby. Which is just stupid. So his solution is to gang up with his dorky friend, Sherman (Jonah Hill), to create a fake acceptance letter to show to his parents from a fake school they call South Harmon Institute of Technology. Get it? It’s S.H.I.T. Wooohoooo. Meanwhile, Sherman got into a legit university called Harmon, which is just… Well, this is one of those movies where all the adults are just straight morons. So are the kids, really. But his folks initially fall for it.

But then the plan unravels. Because they want to see this S.H.I.T. school. So Bartleby and some buddies rent an old insane asylum, fix it up somehow and pass it off as a university. Now, his parents have been to a college before. Do they think one building in the middle of a weedy parking lot constitutes a real college? Did they not think to actually call the place or drive by at any point — seeing as it seems to be very close to their Ohio home? Despite the movie clearly not being filmed anywhere near Ohio — which is cold in the winter, by the way. Anyhow, they do such a good job of faking this college that other idiots start showing up for class. Like somehow they all also have moron parents who pay the tuition for a school with no online footprint, no presence in any college books, a clearly fake website and just… Why am I even bothering to ask these questions? It’s really, really unrealistic and stupid.

Ultimately, there is the inevitable battle between this anarchic group of dummies at South Harmon and the preppy dipwads from the real Harmon, which just smacks of a bad version of Animal House, Revenge of the Nerds and any other number of underdog rag-tag whatevers versus the rich kids. Bartleby and the movie itself try to make the argument that some kids just need to learn differently, and that a school like S.H.I.T. with its courses on yoga, skateboarding and bong hits may be right for these freaks, while the classical education at Harmon may be better for others. But… the kids at the fake college are dorming in unsafe living conditions, don’t have a health office and seem to constantly be in danger of being run over by dudes on motorcycles or stabbed by flaming swords or drowned in the school’s pool. Which — by the way — seems like an odd feature to have at a former insane asylum. Point is, they’re specifically not receiving an education. They seem to mostly be tanning (in “Ohio” in December), partying and being lectured to by an anti-social Lewis Black and a kid who got rejected by every college he applied to because he’s a fuck up. So their parents are paying for them to be nearly physically harmed, live in squalor and come away with no degree and, most likely, a wicked drinking problem and/or staph infection.

The filming is super-amatuerish. There are mistakes all over the place. The slow-mo skateboarding and pool party scenes look like bad b-roll from MTV Spring Break 1987. Just everything about it feels like they were ad-libbing (in a bad way) and hoping nobody looked too closely at it. Because the plot is absurd. The scenarios are absurd. And the “message” is absurd. Which, honestly, is fine when you’re doing a screwball film about a group of underdogs who come out on top. But they tried in some way to infuse this coming-of-age film with a quality beyond its clearly surface scripting. And it failed. Ooooh, did I mention that Bartleby is somehow pursuing Blake Lively in this movie? And she’s actually game? I mean, c’mon, man. And, yes, I realize that the actual Justin Long dated both the actual Drew Barrymore and the actual Amanda Seyfried, but in real life the Blake Livelys of the world date dudes like Penn Badgely and marry dudes like Ryan Reynolds. It’s also weird that Long was a 28-year-old playing an 18-year-old, while Lively was actually 18. But, like everything else in this movie, we’ll just ignore the stupidity of it and move on.