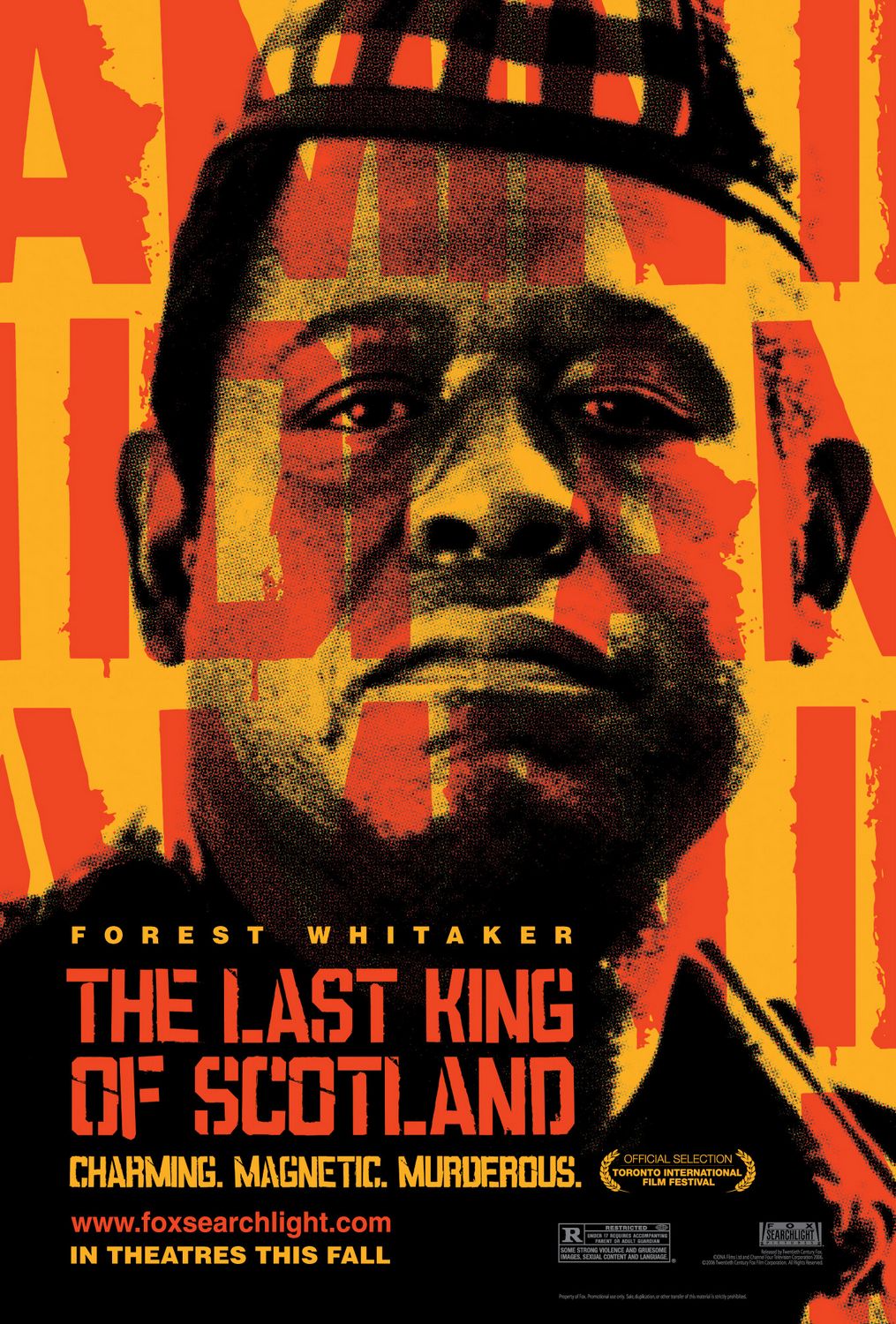 The Last King of Scotland

I am not generally a fan of biopics. They are generally trite and false and endlessly praise people as if they were saints, when they are in fact anything but. Everyone oohs and ahhs when they show the people warts and all, but the subjects always seem to fight through adversity and prevail in the end. How uplifting! The one exception I can recall off the top of my head is Capote, who is pretty much an obsessive douchebag from beginning to end. Granted, it was still a biopic, and I liked it about as much as intentionally cold soup.

That example aside, this movie was something different. It was no Ray or A Beautiful Mind. This was some intricate stuff. Gone was the whole biopic annoyance of trying to shove an entire man’s life into a shiny, two-hour package. After all, how can you tell a compelling, involved story when you’re too busy spewing facts and figures? Instead you invent a fictional character (based very, very loosely on a real person) and put him in the way of the subject’s life. If this subject is compelling enough in his own right, and you’ve intertwined his factual life with that of your fictional protagonist (who is interesting in his own right), then you could have yourself a nice harmony. Granted, fiction is always more interesting than fact because it can be manipulated by professional writers and directors. So this film is like reality on steroids, intertwining history with a very strong story about run away hubris, guilt and betrayal.

Like most maniacal dictators who rise to power through the people, Idi Amin is a charismatic guy who, with the unwitting help of his fictional advisor, fools a good deal of the world about how he’s dealing with his enemies and running his country. We see much of this from the perspective of this advisor, Dr. Nicholas Garrigan, who is drunk with power and flattery and is blinded to the truth of Amin’s horrible violence and hypocrisy. Ultimately we end up asking the question of this man, Dr. Garrigan, (who started off with only the purest of intentions, coming to Africa from what was to be a cushy life in England to treat the poor, infected people of Uganda), of whether he is really blind to the ways of Amin, or just chose to ignore them so as to not jeopardize his position of power and betray his sense of right and wrong. Power is an amazing aphrodisiac, and Garrigan falls for it the same way Amin does. Even when he sees flashes of Amin’s violent temper and murderous ways he is either too charmed by the man to break away, or not willing to give up the life he has built as the man’s most trusted advisor.

Whitaker is amazing as Idi Amin, and even his squinty eye, which is usually kind of distracting, somehow makes this completely insane man seem sympathetic at times. James McAvoy, as the doctor, is also extremely good. I thought I recognized him, but it turns out the only thing I’ve ever seen him in is The Chronicles of Narnia, where he played that stupid faun thing that tramps around in the snow. He was nominated for some random awards here and there, but it’s honestly one of the best performances I’ve seen in quite a while from a relatively young guy. Even so, Whitaker and he should have won best actor and best supporting Oscars. But, honestly, it could have been the other way around, as McAvoy was in every scene of the movie, but it was really Whitaker’s show to steal. The other thing to note was an appearance from Gillian Anderson, who was lookin’ really good. Maybe it was my nerdy ass missing The X-Files, but she was pretty hot as the doctor’s early love interest. So this movie has all of the things one looks for in a film: tension, great acting, interesting characters and a decent plot. I believe I turned to Ms. Hipster after the film finished and we both uttered “wow” in unison. Really amazing stuff–especially for a biopic.