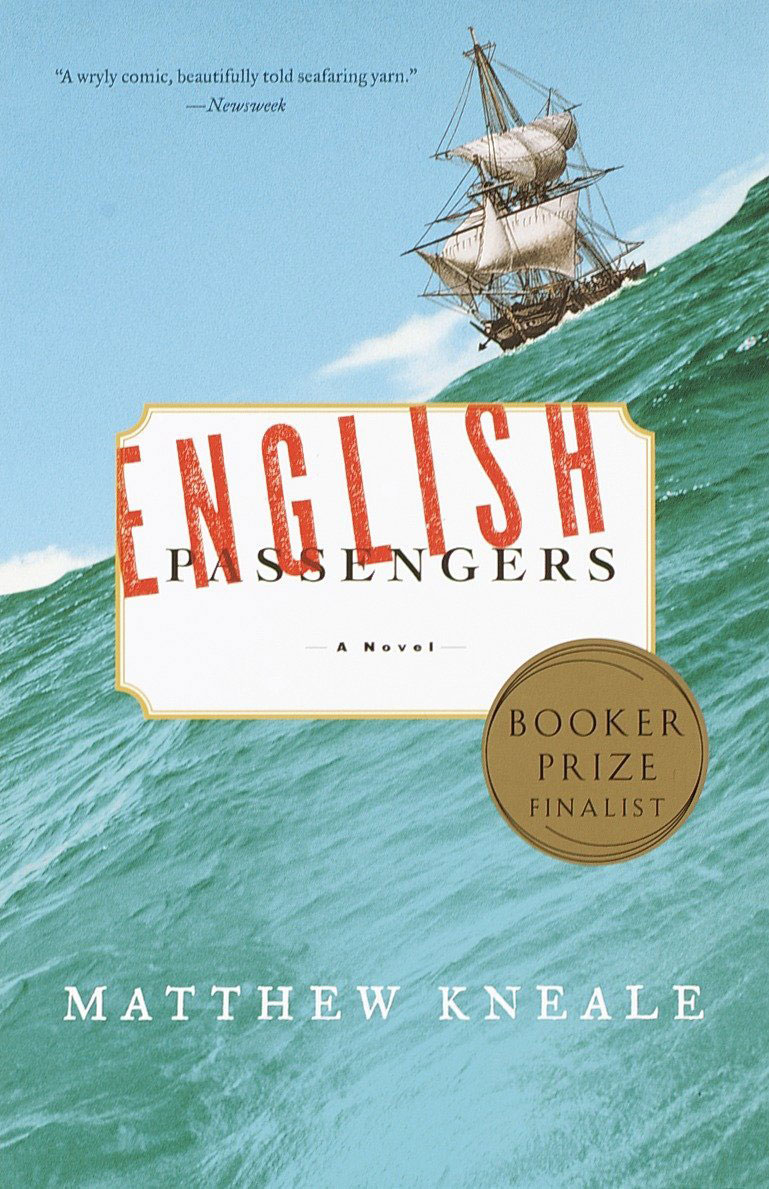 I tend to buy my books in clusters. I’ll get super-motivated, cozy up with Amazon and just go to town on those recommendations, wish lists and whatever else I can get my hands on. I’ll Google other lists around the Internet and read synopses and reviews to get a sense of the book, and sometimes on sheer impulse buy a twelve dollar item that will surround my life for up to three weeks (depending on page length, tiredness factor, the Lincoln Tunnel, etc.). I may not get around to the last tome in my bulk purchase until six months after reading up on it and plunking down the credit card. Admittedly I had no recollection of what English Passengers was about when I plucked it off my shelf a few weeks ago. And reading the back cover, I had no f’ing idea why I had bought the thing. I actually turned to page one with some dread. Ships confuse me. Ships of any size just confound my sense of space and time. That’s one of the reasons I disliked Life of Pi so much; I couldn’t keep the starboard and aft and port thing straight–and that was just a little dinghy. And while the description of the one ship in this book did confuse me a bit with its fo’c’sle and hull, the author didn’t get all technical and obsessive with his nautical terms. Instead the ship was just another character in this ensemble piece of semi-historical fiction. I’ve professed my ignorance of history on more than several occasions, but I most certainly couldn’t be expected to know about the history of Tasmania (formerly called Van Diemen’s Land). This is a brutal history that I’m sure the English, given the chance, would surely like to erase from the books. The brutality that the English inflicted upon the native, Aborigine population of that country is stunning. The treatment it gave its own citizens, who were sent there as criminals, was almost as bad. This history is surrounded by a few stories which all end up ultimately tying together. There’s the ship’s captain and his crew from the Isle of Man just trying to make some extra money smuggling booze and tobacco to the heavily taxed citizens of other shores. Then there is the vicar and his expedition to Tasmania to find what he believes is the Garden of Eden. Thrown into the mix is the story of one aborigine trying to survive against the odds under British imperialism. There are a bunch of other characters who get a chapter or two here and there, enriching the story, all in their first-person accounts. These include, but are not even close to limited to, a governor, a governor’s wife, a prison superintendent, a convict and every manner of British civil servant. The author, while illustrating the absolute decimation of the native population through murder, disease and internment, manages to also convey the absurdity of the whole thing–not keeping it “light” per se, but certainly not making this as much of a horror show as it could be. It’s just a fascinating look into the lengths men will go to justify their actions. Despite what sounds like pretty dry subject matter, the book and its non-linear, but date-driven diary-entry-from-lots-of-points-of-view narrative structure keeps things humming along. The nice part is if you’re getting sick of the aborigine guy talking about how he’s going to stick it to the white man, you know in only a few pages that the psychotic doctor, who thinks that he can classify all human behavior and actions based upon racial and ancestral background (Hitler, anyone?), will be up. And if you’re into Manx sea captains or egotistical vicars, then this book has it all for you. Sometimes funny, and always just a little bit shocking (the author based a lot of the characters and events on real people from history), the thing turned out to be a surprise hit after my initial hesitance.